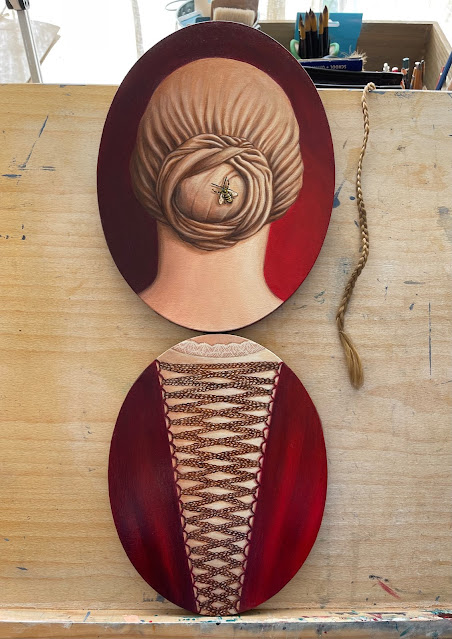 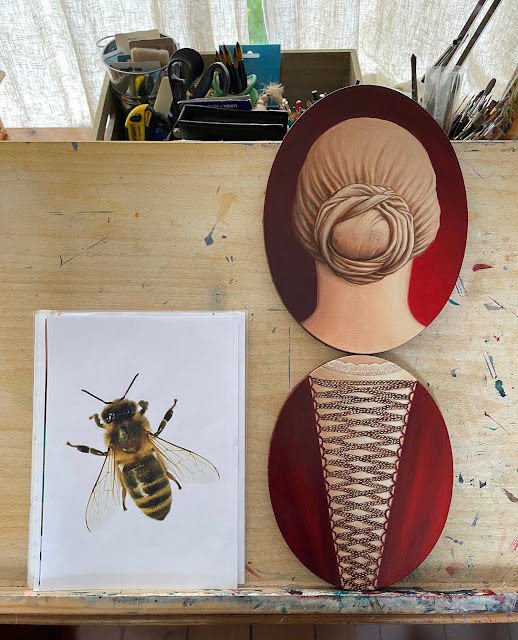 Pictured above: progress views of my current work, Apiary, snapped in my Ballarat studio shortly before its move to the residency studio at Geelong Grammar School.

Directly below is the work that inspired it. Portrait of a Woman of the Hofer Family, c. 1470, by an unidentified Swabian artist, is a painting that has intrigued me ever since I happened upon it in the National Gallery, London, in 1993.

At the time the work was made, Swabia included parts of Southern Germany, Switzerland and France. The artist is unknown, as is the identity of the sitter, although we can still discern something of her background. Her jewellery and opulent costume indicate wealth and the text in the top left hand corner, "Geborne Hoferin," translates as "born a Hofer." 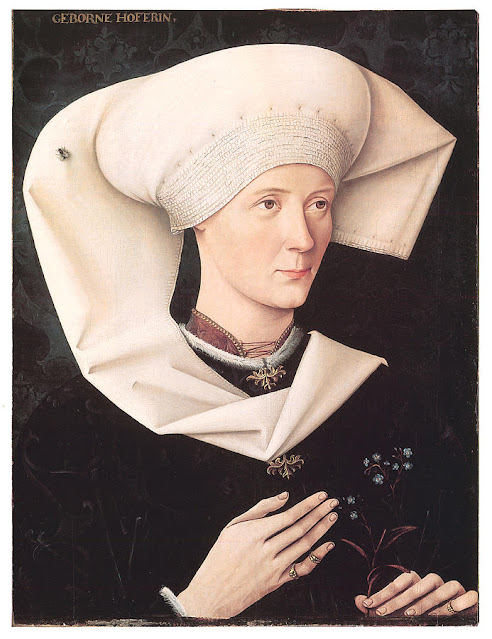 The fly that has apparently landed on the sitter’s otherwise immaculate headdress is a striking  example of trompe-l'œil (French for “deceives the eye”). It lends a decidedly unsettling element to what would otherwise have been a charming, but conventional portrait. In art, flies have long served as symbols of mortality. Nevertheless, the painted insect could be regarded as nothing more than a visual joke, intended solely to trick us into believing a fly has actually landed on the painting. When viewed in combination with the sprig of Forget-Me-Nots held by the sitter, however, the work seems more likely to be a posthumous portrait, commissioned by wealthy patrons in remembrance of the sitter. 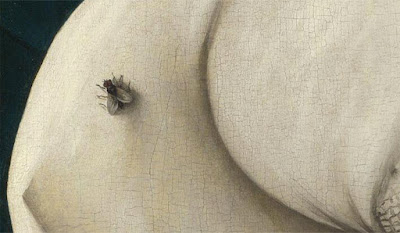 Shortly after first discovering the work, I began an Australia Council residency at the Cite International des Arts in Paris. During my three month stay, I made two works in homage to Portrait of a Woman of the Hofer Family, a small linocut, followed by a more detailed oil pastel drawing. From memory, it was fairly close in scale to the painting on which it was based. I included most of the original compositional elements, with one notable exception. In order to personalise the work, I replaced the fly with a bee, a symbol of more personal significance. Deborah is elicited from D'vorah, a Hebrew a word meaning "bee", the symbol of prophecy in Ancient Greece. When combined with the sprig of Forget-Me-Nots, the print and drawing became personal expressions of homesickness.

Apiary recalls this painting, evoking a similar era and reinstating the bee emblem. It’s a particularly personal work, albeit in an entirely different context, and I was at pains to paint the bee as convincingly as possible. Only after I’d finished, did I realise the bee is slightly too large in scale.

Lately I’ve had some lively conversations with staff and students during my residency at Geelong Grammar School, where I’ve been making the finishing touches to the work. Chris, a staff member who is also a bee keeper, admired my bee, which was somewhat heartening. When I expressed my concerns that the bee was a little oversized, he replied, “Well, it’s your bee!’ And so it is - so it shall stay just as it is. Thank you, Chris! 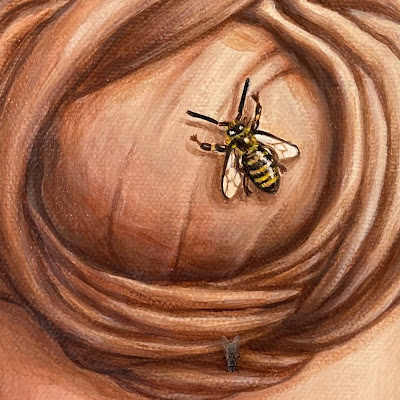 On the following day, I was discussing Apiary and its influences, including Portrait of a Woman of the Hofer Family, with a group of students. In an uncanny instance of life imitating art, a fly landed on the subject’s painted headdress, right next to my bee. Unfortunately I wasn’t able to whip out my camera quickly enough before the fly moved on to explore other areas of the canvas. You can just spot it nestled in the darker folds of the painted fabric.

Posted by Deborah Klein at 6:06 AM