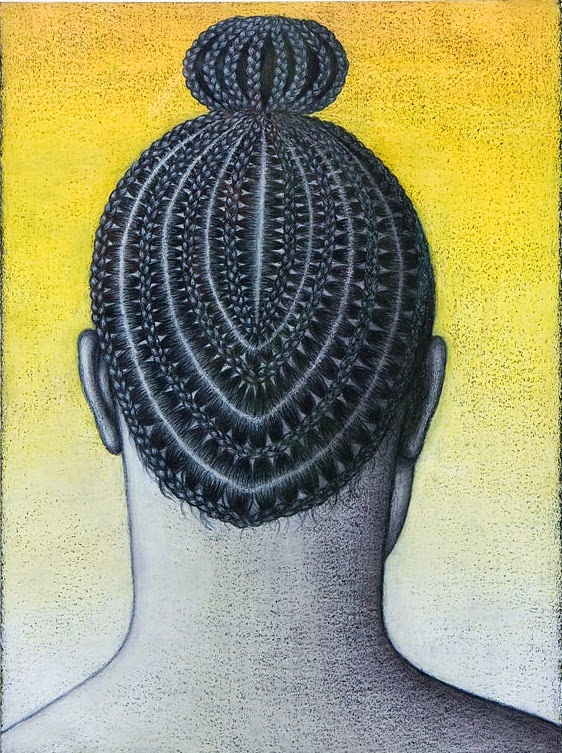 Whilst doing some online research last year, I happened upon an old drawing of mine that had not only vanished from my life, but also from my memory. The unimaginatively named Untitled (Yellow) 2001, oil pastel, 76.5 x 57 cm (pictured above) was originally part of a series of prints, paintings and drawings made between 1998-2004 that focused on the backs of women’s heads. They are reproduced on the Portfolios page of my website under Knots and Braids – all except this one, which somehow slipped through the net.  A number of the works were exhibited in a solo exhibition in Sydney in 2003. The drawing sold from there and vanished to parts unknown. I can’t remember the site on which I discovered it, however I downloaded the image and in all likelihood would have soon forgotten about it again. But in one of the many instances of synchronicity that mark our friendship, noted iPad artist Deborah McMillion recommended an app called Butterfly Cam. Straightaway I recognized the potential of incorporating one of the butterflies featured in the app into my recently unearthed drawing. The intuitive act of progressively adding yellow butterflies to the drawing sparked an idea for a fairy tale, the first I’d written in ages. After writing several drafts, I filed the story and metamorphosed drawing away. Yet again, I almost forgot about the drawing - and the fairy tale too. Deborah McMillion is the only one who ever read the story – at least until now. This evening I exhumed it, dusted it off, did some minor tinkering, and published it on my book blog, Moth Woman Press, along with two versions of the re-configured drawing. To read the illustrated story, The Yellow Butterflies, click HERE.
Posted by Deborah Klein at 1:54 AM

Myself and my hero 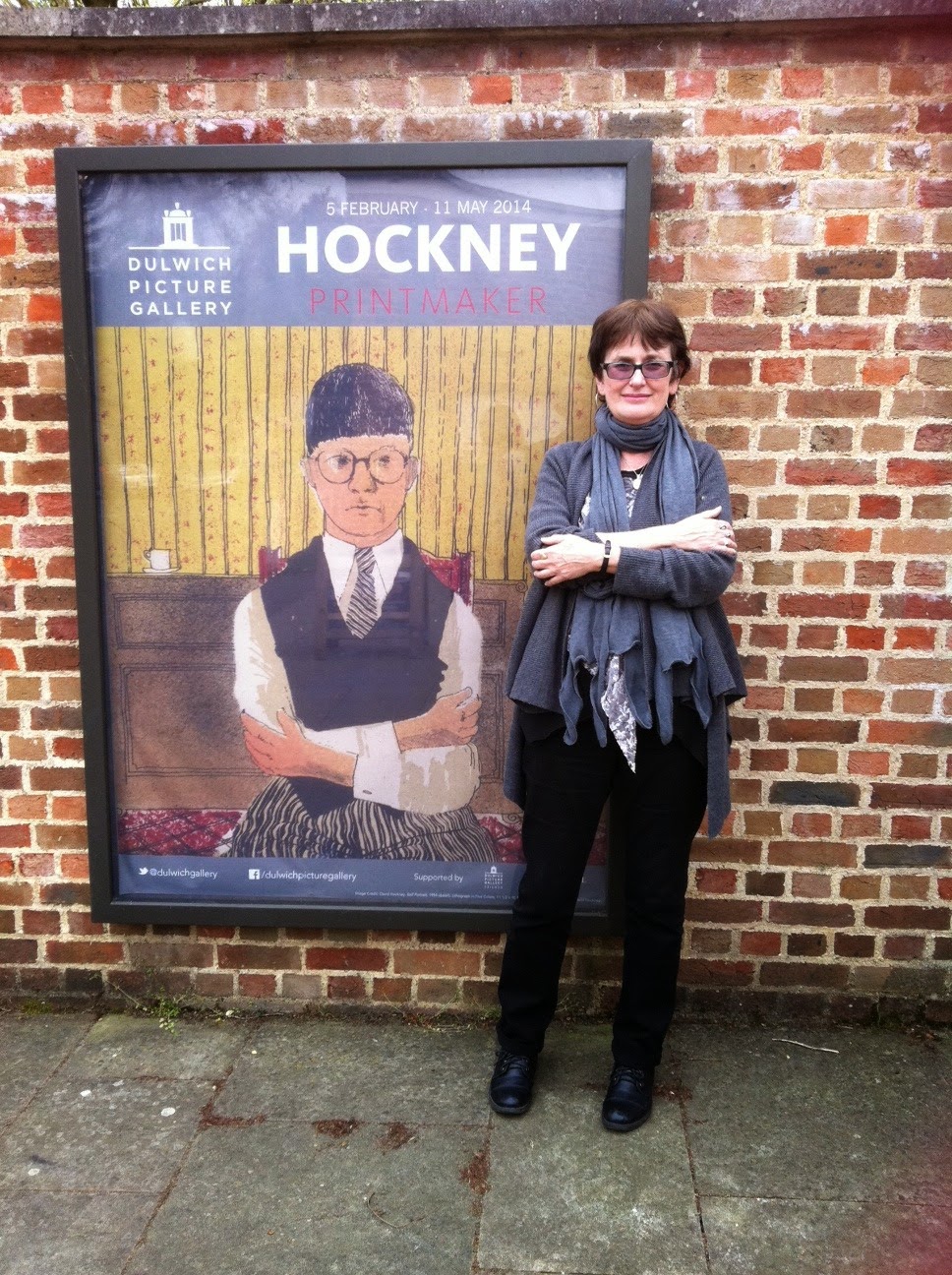 Incredibly, it's 60 years since David Hockney made his first print, the lithograph Self Portrait, 1954 at Bradford College of Art. (It's reproduced on the poster pictured above).

London's Dulwich Picture Gallery recently celebrated this significant anniversary with a survey exhibition focusing entirely on Hockney's printmaking practice. Better still, it coincided with my visit to the UK in April. Hockney's prints, for example, his suites the Rake's Progress, 1961-63 and Six Fairy Tales from the Brothers Grimm, 1969, have had a considerable impact on my work since I saw my first examples in London in the 1970s.

The former work was primarily responsible for fostering an interest in developing narratives by working serially using literary or other sources as a basis, and incorporating autobiographical elements. For example, The Threepenny Opera, 1928 by Bertolt Brecht and Kurt Weill was a springboard for The Pirate Jenny Prints, 1986-87.


And my little seen, most overtly personal work, the Alice in the Cities suite of woodcuts, 1989, took Lewis Carroll’s Alice in Wonderland and Through the Looking Glass as its point of departure. Like Hockney’s Rake, my protagonist was literally an innocent abroad. To see a handful of the Alice in the Cities prints, click HERE and scroll down.

Hockney Printmaker was superb. It included many other personal favourites: 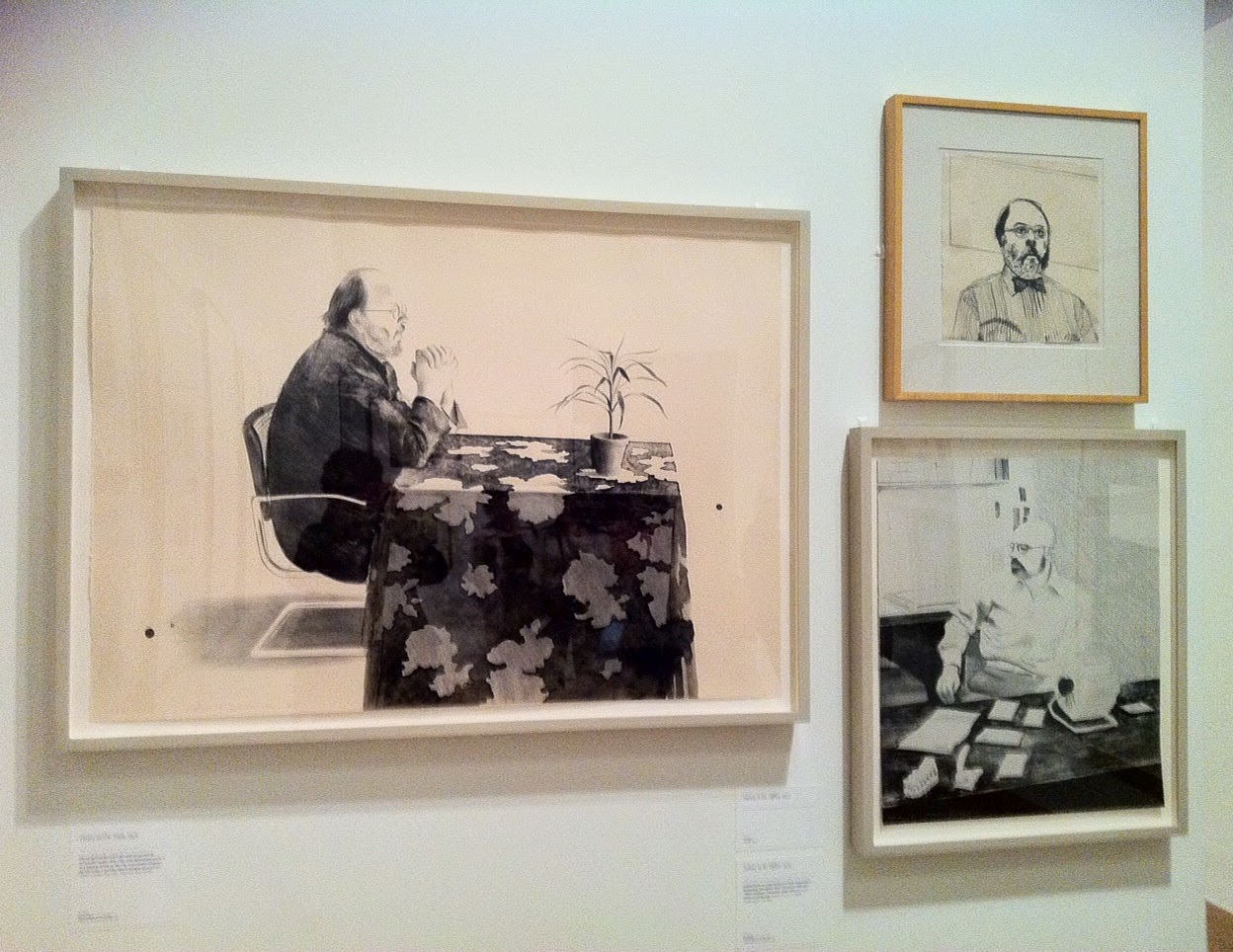 The exhibition opened with another of my favourite prints, Myself and my heroes, 1961. David Hockney will always be one of mine.

The exhibition concluded on 11 May. You can read about it in the UK Guardian HERE.
Posted by Deborah Klein at 12:16 PM

Elsa Lanchester at the BFI


The British Film Institute on London’s South Bank is one of my favourite haunts. I’ve been going there since I lived in London in the 1970s, not infrequently in the company of one of my oldest and dearest friends, Sue Verney. I have so many happy memories of this place. For example, it was there, many moons ago, that Sue introduced me to Letter from an Unknown Woman (1948, Director Max Ophüls) for which I will be eternally grateful. On another memorable occasion, I introduced Sue to what became another mutual favourite, the dazzling film noir Murder My Sweet (1944, Director Edward Dmytryk).

To my delight, the BFI interior is currently festooned with banners of Elsa Lanchester (1909-1986) an actress Sue and I have long admired. (She and I once sat in a pub in Nottinghill Gate and started a fan letter to her. We finished our drinks, but never did finish the letter – I guess we just couldn’t find the right words).

My miniature painting Black Swan, 2013, is a playful homage to Elsa Lanchester in what is arguably her most famous role: The Bride of Frankenstein (1935, Director James Whale). It’s an extraordinary film and her dual performances as Mary Shelley and the Bride – particularly the latter - are simply astonishing, albeit far too brief. While still in London, I looked her up online and discovered an absolute gem – a two-part interview with Dick Cavett. In Part 1 she speaks of her late husband, the incomparable Charles Laughton. (1)

On a personal note, however, the real revelation came soon after, when Cavett asked her about The Bride of Frankenstein. In one of the movie’s best remembered scenes, the newly unbandaged bride first lays eyes on her husband to be: Frankenstein’s unrequitedly smitten monster, touchingly portrayed by Boris Karloff. Horrified, but  having no words, she begins to hiss – a scene once seen and heard, not easily forgotten. Lanchester tells Cavett that her character's reaction was based on a swan’s warning hisses and promptly launches into a marvelously spirited recreation of the sound.

Ironically, a swan wasn’t the first choice for my painting. Initially I considered other animals, including a skunk, but after much trial and error the black swan, with its downy white flight feathers was the only creature that worked compositionally. The pictorial reference to Elsa Lanchester’s portrayal of Frankenstein’s Bride was completely serendipitous - and not a little uncanny.

(1)  For Part 1 of Dick Cavett's interview with Elsa Lanchester, click HERE.
For Part 2 of the interview, click HERE.
Posted by Deborah Klein at 12:39 PM 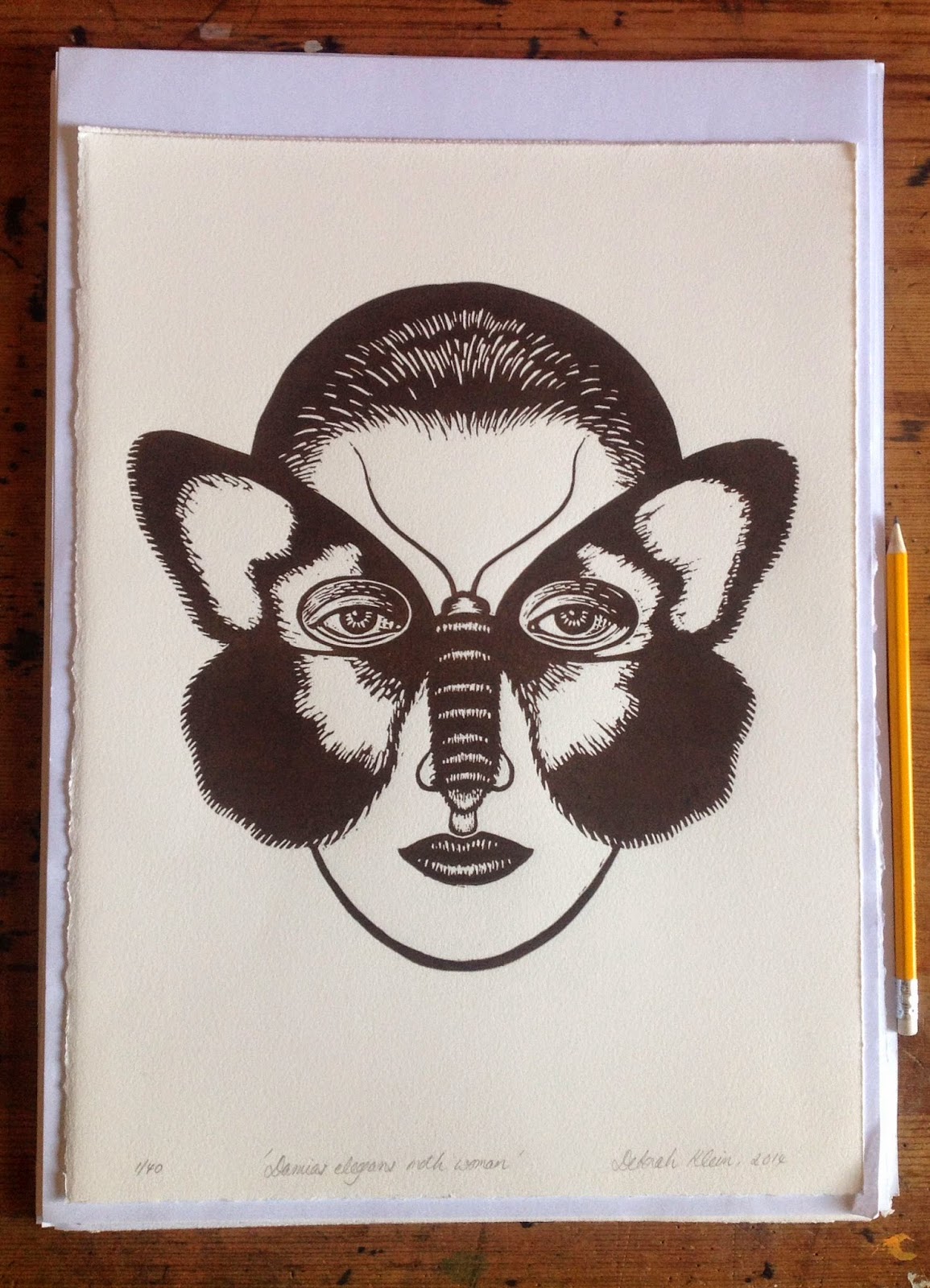 The first print to be editioned in our new studio at Ballarat is signed, sealed and soon to be delivered. It's heading for Beastarium, a print exchange portfolio coordinated by Rona Green. In due course, portfolio edition no. 40/40 will become part of the permanent collection of Dubbo Regional Gallery, where it will be exhibited in 2015.

Dubbo Regional Gallery’s prime collecting theme is The Animal in Art. Inspired by the Gallery’s rural location and proximity to Taronga Western Plains Zoo, the Animal in Art seeks to examine issues surrounding the representation of animals in the Visual Arts. The Animal has been used extensively as a symbol, trophy, object and metaphor. The collection tackles some of the wider possibilities of this rationale through works that use the animal as a means of expression whether in a literal or metaphoric way.

From late March and throughout the better part of April I've been visiting London with my partner Shane Jones.

With an unwanted souvenir from the UK finally discarded, namely a severe, lingering dose of flu, there is much to catch up on - but where to start? It seems to me that as good a place as any is from right where I left off - namely preparing for Biblio at Clunes Booktown.

After a nightmarish return flight to Australia (we left London on Monday 28 April and, due to a series of chronic mechanical faults with the planes on both legs of our journey, didn’t land in Melbourne until Thursday 1 May). In total, we were 32 hours late; there was just enough time to snatch a little sleep before setting off for Clunes to set up my stand for Booktown, which ran from 3-4 May.

Biblio, the section in which I exhibited, focused primarily on artist books. It was great to reunite with book artists I’ve long known and admired: David Frazer, Angela Cavalieri, Gracia Haby, Louise Jennison and Dianne Longley, and to have the pleasure of meeting and admiring the work of Deanna Hitti, Tai Smith, An Kyunghee and Nicholas Jones (the latter was also Biblio’s curator). The State Library of Victoria and the Baillieu Libraries also exhibited selected gems from their vast collections. We received hundreds of visitors and an overwhelmingly positive response to our work.

Posted by Deborah Klein at 1:25 PM