In the spirit of if you can't beat them, join them, I give you my own Halloween Female Super Hero: St. Martha, the Patron Saint of Housewives (1993, oil on canvas, 1370 x 510, collection: the artist).

Centuries before Buffy, there was St. Martha, who was responsible for slaying a bloodthirsty dragon (AKA the Tarasque) that was laying waste to the countryside of Tarascon, an ancient town on the Rhône, situated between Avignon and Arles. According to legend, St. Martha succeeded in capturing and taming the dragon, which the townspeople subsequently destroyed. For more about St. Martha and the Tarasque, click HERE.

The work was made in 1993 as part of a three-month Australia Council Residency at the Cite Internationale des Arts in Paris. Its key point of departure was the superb painting, St. Michael by Piero della Francesca (1469). Originally a side panel of an altarpiece, it is now one of the gems of the Sainsbury Wing of London's National Gallery. You can view it HERE.
Posted by Deborah Klein at 9:32 AM

It's hard to believe that only this time last week I was heading to the Australian Print Workshop for the first day of the APW Print Fair.

Coincidentally, the project that followed closely on its heels (started pre-print fair but finished this week) is also for the APW: their biennial Impressions exhibition. Because I'm doing a residency at the Art Vault in Mildura from 24 November, I'll miss the opening of the show (this year it's on 28 November) an event I very much enjoy. It's also the reason I've had to get my edition done ahead of time.

Following are some key stages in the metamorphosis of my Impressions print, Cotton Harlequin Bug Woman, from lino block to completed edition, numbered, titled, signed and ready for delivery to the APW.

The Cotton Harlequin Bug is a member of the Jewel Beetle family. Like the linocut Jewel Beetle Woman made early this year in collaboration with APW Master Printer Simon White, I've used pigmented drawing inks to hand-colour the work. The inks have a marvellous transparent luminosity that captures the glowing colours of these glorious insects far more successfully than watercolours ever could. 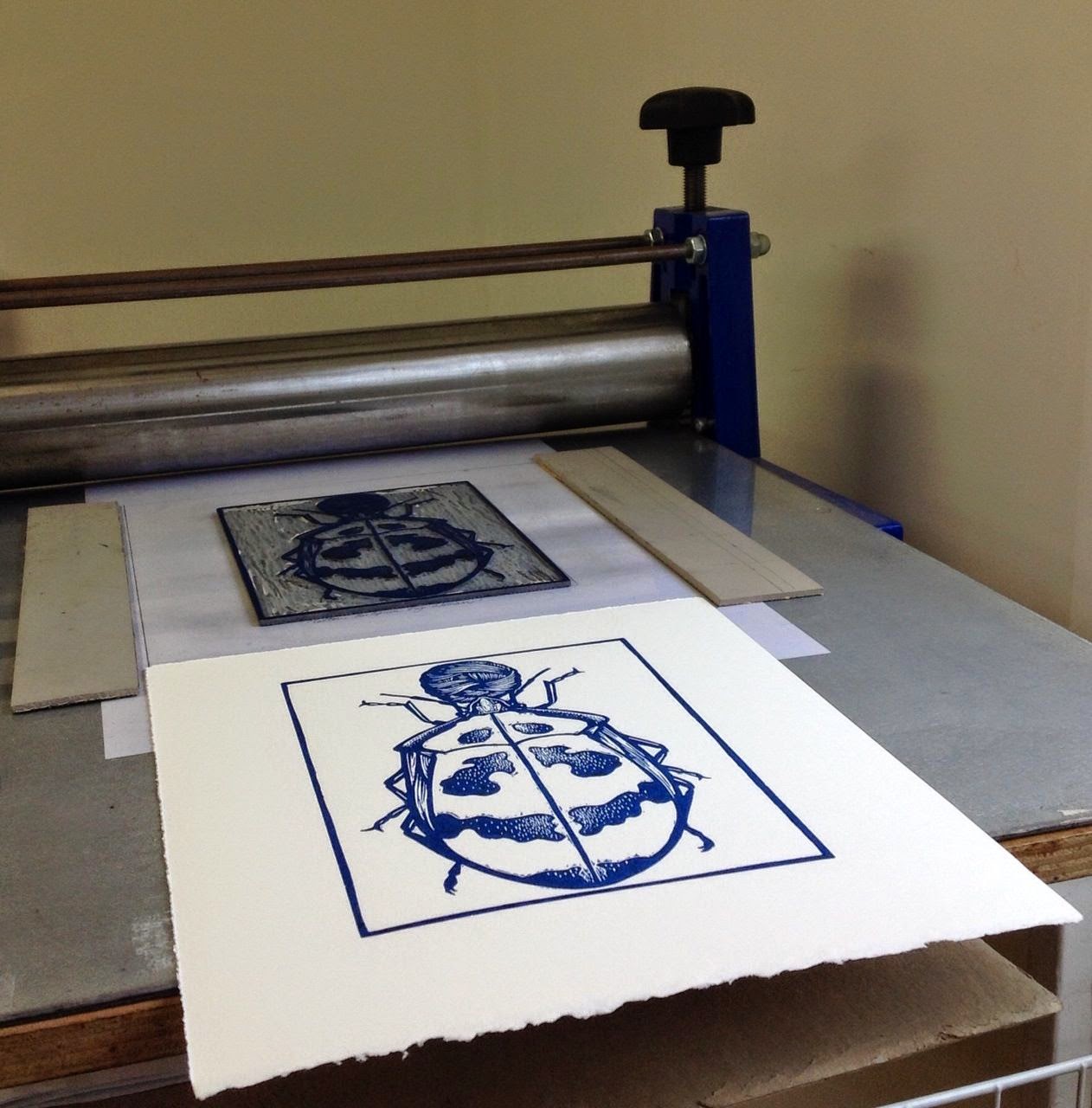 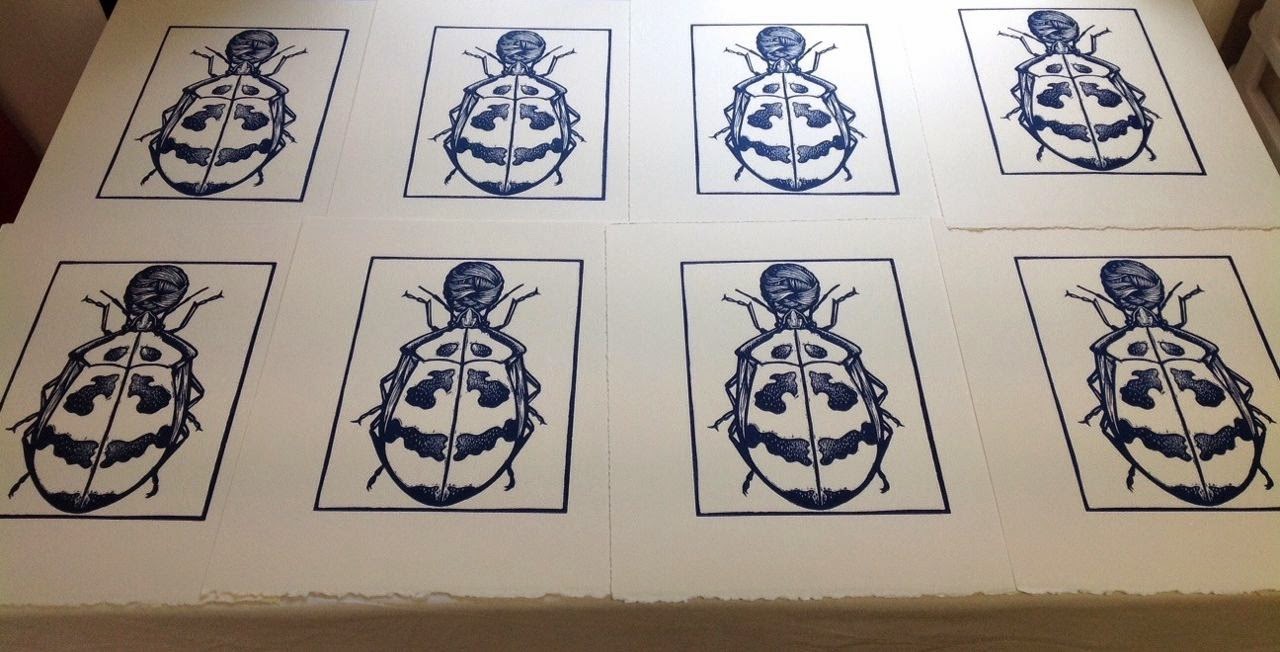 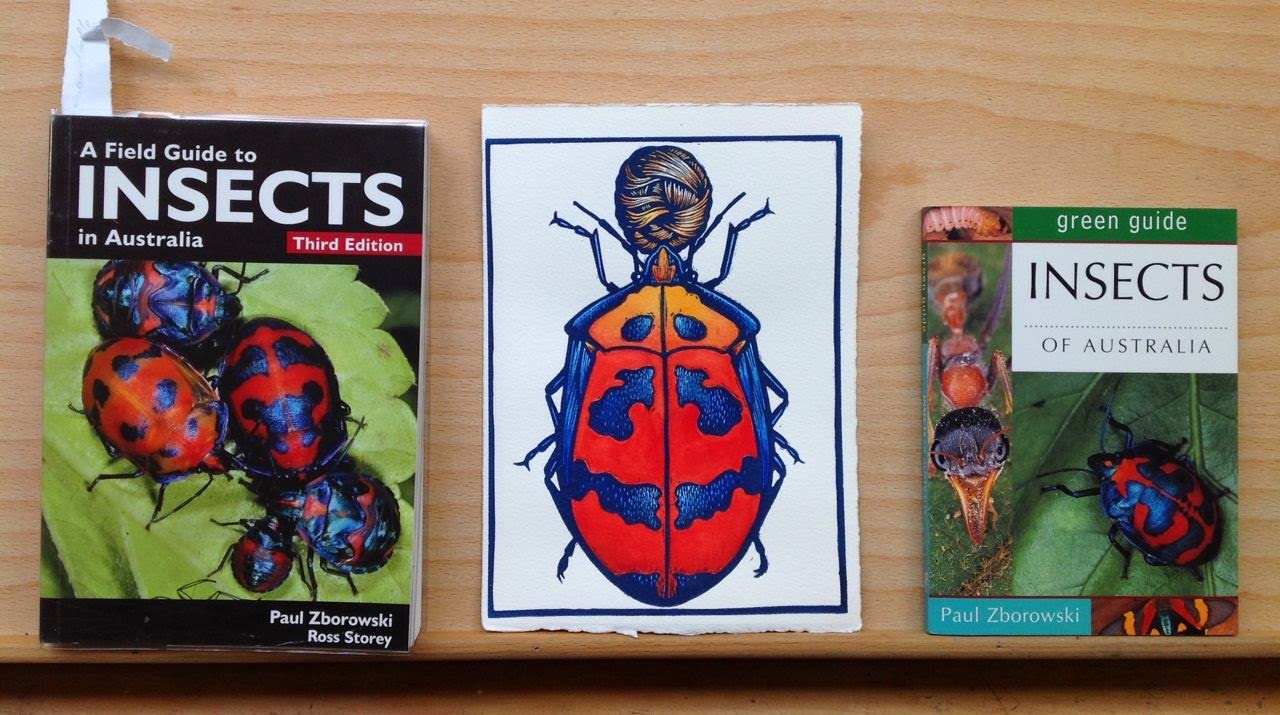 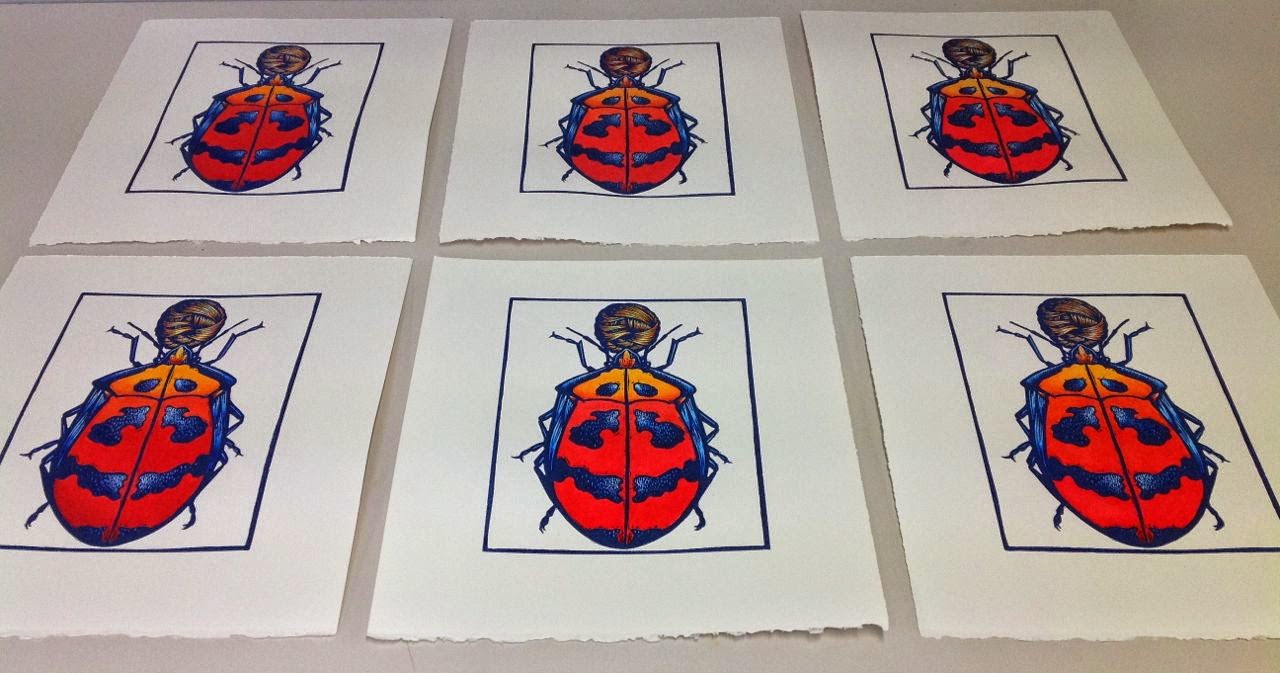 A big thankyou to everyone involved in last weekend’s APW Print Fair. It has been pronounced a great success, with a new record set for visitor attendance. There was much lively conversation, both with visitors and exhibiting artists, and an overwhelmingly positive response to our work.

Posted by Deborah Klein at 8:32 AM

Your Invitation to the APW Print Fair


Apparently the cutting, mounting, wrapping and labelling that currently consumes my waking hours has become compulsive (see also Blog Post Saturday, 4 October). I've added several more works to those I'll be showing at this coming weekend's APW Print Fair. As a result, there will now be complete sets of the Winged Women, Moth Masks and Enchanted Hair Ornaments linocuts. Pictured above, atop the invitation, is Enchanted Hair Ornament #3 (2009) and directly below are five additional Winged Women (2010).

All of the prints, particularly the Moth Masks and Enchanted Hair Ornaments, have had relatively little exposure in Melbourne. Their first and last appearance was in the 2009 group exhibition I saw and heard of none like me, curated by the inimitable Rona Green, so it's likely that many who visit the Print Fair will be seeing them for the first time.

I'll be there on both days and look forward to seeing you.

Amidst the seemingly endless preparation for this weekend's APW Print Fair, I momentarily pause, catch my breath and recall the lively opening of Goldfields Printmakers last Saturday, 4 October at Firestation Print Studio. I'm very proud to be part of the GP group and this super show. It was fantastic to meet the Firestation Workshop Manager Edith May at long last, catch up again with many of the talented Goldfields Printmakers and see so many other faces, both familiar and unfamiliar.

Thank you to the GP members who worked so hard towards this, with special thanks to our fearless leader, the tireless James Pasakos and to Dr. Carole Wilson for her terrific opening address. For those who haven't yet had a chance to see the show, Goldfields Printmakers runs until 18 October.
Posted by Deborah Klein at 4:12 PM

The Australian Print Workshop's APW Print Fair opens next weekend, 11-12 October. As one of the participating artists, much of my time of late has been spent mounting, packaging and labelling my work (see below).

I’ll be showing selected prints from 3 separate, but related bodies of work, namely the Enchanted Hair Ornaments (2009) the Moth Masks (2009) and the Winged Women linocuts (2010).

We have high hopes for fine weather and a swarm of visitors. I hope some of you will be among them. If you can make it, be sure to come up and say hello.