Wanting to explore the possibilities of the archival Pigment Markers Winsor and Newton have invited me to try, I've set myself a little project. Its focus is the Moth Woman Vigilantes, the nefarious gang of masked women who sporadically appear in my linocuts, zines and one soon-to-be artist book.

Drawing from a lifelong love of cinema, I've been working on a series of pigment marker drawings in a small sketchbook. Photographic portraits of a variety of screen actors, some of them dating back to the silent era, were points of departure for a new group of Moth Women Vigilantes.

My choice of markers: black, white blender, colourless blender and a range of warm and cool greys, reflects the bygone era of the silver screen. 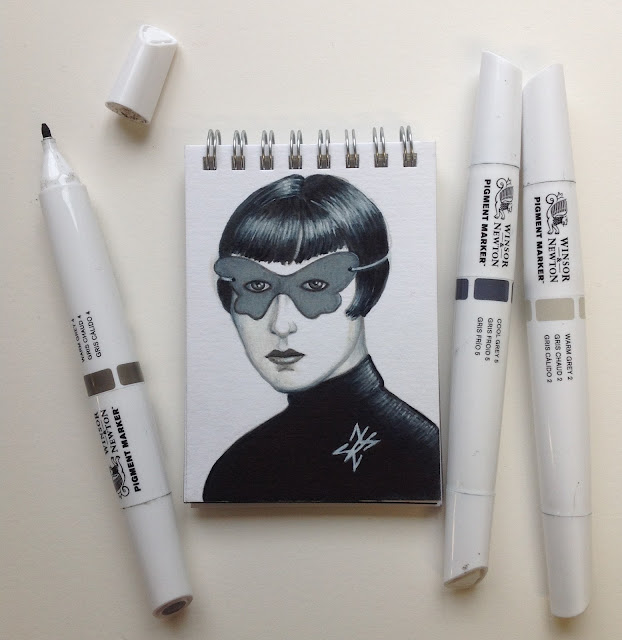 A rebel herself, Louise Brooks is a worthy inductee to the MWV Sisterhood. One of the cinema's finest actors and also a superb writer, Brooks is best known for her indelible portrayal of the seductress Lulu in Georg Wilhelm Pabst’s master work, Pandora’s Box (1929). She is equally commanding as the title character in Pabst’s, hard-hitting social drama, Diary of a Lost Girl (1929). For film enthusiasts, Brooks's remarkable essays, collected in the book Lulu in Hollywood (1982) are an essential read.

Reinvented as a member of the MWV, Louise Brooks is pictured above, with W&N markers providing a sense of scale. 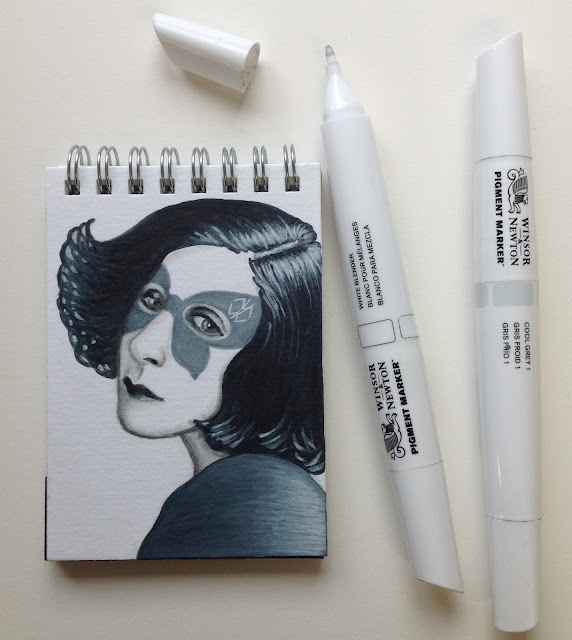 Russian-born Alla Nazimova immigrated to America in 1905. She was a distinguished theatre actress who specialized in the works of Chekhov, Turgenev and Ibsen. (Dorothy Parker, a frequently acerbic critic not given to gushing) proclaimed her the greatest Hedda Gabler she had ever seen). Nazimova also forged an impressive career in silent films, making a number of successful features for Metro Pictures (the forerunner of MGM) in the 1920s.

In recent years I acquired a copy of the Greta Garbo movie, Camille (1936). A bonus on the DVD is Nazimova’s visually arresting version of the same story, made in 1921. The early Art Deco production and costume designs by Nazimova’s friend, Natacha Rambova (future wife of the film's co-star, Rudolph Valentino) are astonishing. In many ways I prefer it to the justifiably celebrated, but more conventional 1936 film.

Another woman ahead of her time, Alla Nazimova joins the growing ranks of Moth Woman Vigilantes in this second Winsor and Newton pigment marker exercise. 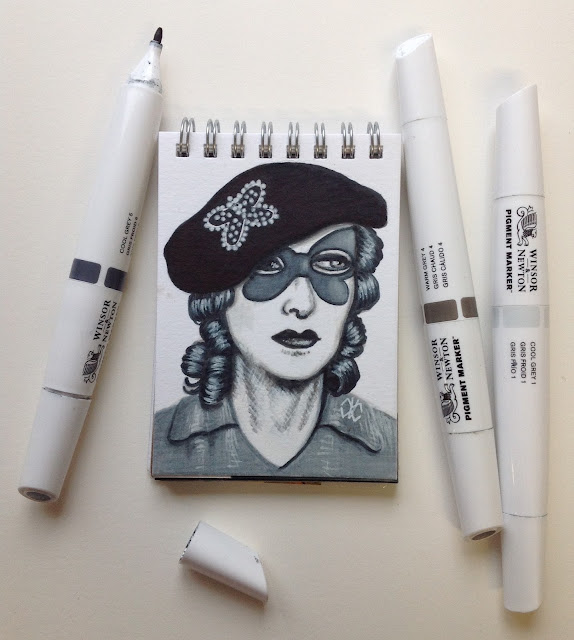 The initiation of screen and stage actor Bette Davis into the prestigious Moth Women Vigilantes Hall of Infamy is long overdue.

A favourite movie of mine is All About Eve; it's distinguished by a diamond-sharp script and a fine ensemble cast. But the standout performance is delivered by Bette Davis. She's so damn good as Margo Channing it's hard to believe that she wasn't the first choice for the role (it was originally intended for Claudette Colbert). My personal list of favourite Davis films is far too lengthy to fit here, but also includes Of Human Bondage (1934) Dark Victory (1939) The Letter (1940) The Little Foxes (1941) and Now, Voyager (1942).

In her long career, Davis frequently lived up to her reputation for being difficult. Like the Moth Women Vigilantes, she didn't suffer fools gladly and always fought long and fierce for what she believed in. Davis sought for truth and honesty in her roles. Moreover, she was never afraid to appear unsympathetic or unglamorous - never more so than in her portrayal of the grotesque, crazed title character in Whatever Happened to Baby Jane? (1962). Reputedly she even did her own makeup for the film.

With the exception of her newly acquired MWV mask, this Winsor and Newton Pigment Marker drawing shows Bette Davis much as she appeared in Whatever Happened to Baby Jane? right down to the insect brooch adorning her beret. 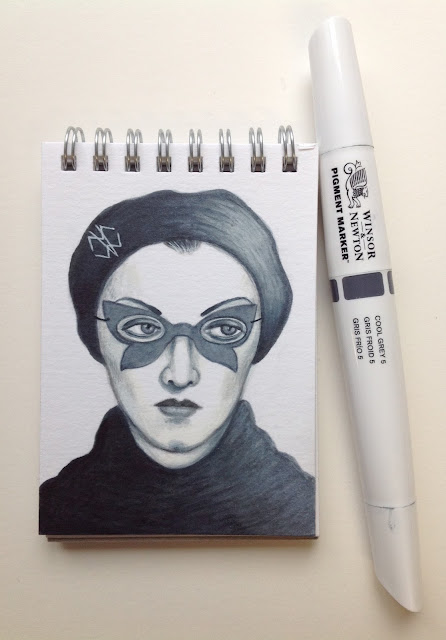 As is the case with many a talented actor, Hollywood took a long time to know what to do with her. In many of Loy's early films, she was stereotypically cast as femme fatales, Asian or Eurasian characters, for example, the evil daughter of Boris Karloff in The Mask of Fu Manchu (1932).

In 1934 she appeared opposite actor William Powell in Manhattan Melodrama, best known as the film notorious gangster John Dillinger viewed just before he was shot dead outside the cinema. (Allegedly, Loy had been his favourite actress).

Myrna Loy had already made over eighty movies before she appeared in the Thin Man (1934). The movie, based on Dashiell Hammett's celebrated detective novel, would jump-start her career.

Initially head Louis B. Mayer refused to cast her opposite William Powell as urbane husband and wife sleuths Nick and Nora Charles. He regarded Loy as a solely dramatic actress, not capable of handling the film's sophisticated comedy scenes. But director W. S. Van Dyck recognized her latent comic gifts and held out for her.

Loy and Powell would prove to be one of cinema's longest-lived pairs. They went on to make another twelve films together, including five sequels to the Thin Man, between 1936-1947.

Throughout the series, Nora is Nick's equal. She matches him in intellect, guts and nerves, wisecrack for wisecrack, cocktail for cocktail. Their natural, easygoing rapport, mutual respect and affection (which Loy and Powell shared in real life) rang so true that many people mistakenly believed they were really married.

Despite her long, distinguished career, Loy was never nominated for an Academy Award, an oversight deplored by the Moth Women Vigilantes. Believing the Honourary Oscar she received in 1991 was too little, too late, they have awarded her their highest honour: induction to the Moth Woman Vigilantes Hall of Infamy.
Posted by Deborah Klein at 11:29 PM

EVENTIDE - an After Noon event at Mornington Peninsula Regional Gallery

Here are a few snapshots, all of them taken by my partner Shane Jones, of yesterday’s After Noon event at Mornington Peninsula Regional Gallery. They feature Rona Green, Euan Heng and I conversing about the current relief printmaking exhibition/print exchange, Eventide.

So many people attended and we extend our warm thanks to all of you. Your engagement and enthusiasm helped make the afternoon an utter pleasure. It was great to talk with several of you individually after the event.

Thanks also to Jane German, Public Programs and Marketing Coordinator, and all the MPRG staff who made us so welcome and ensured that everything ran so seamlessly.

Finally, a huge thank you to Eventide curator and exhibiting artist Rona Green for conceiving and curating the wonderful show that is Eventide and for inviting me to be part of it. 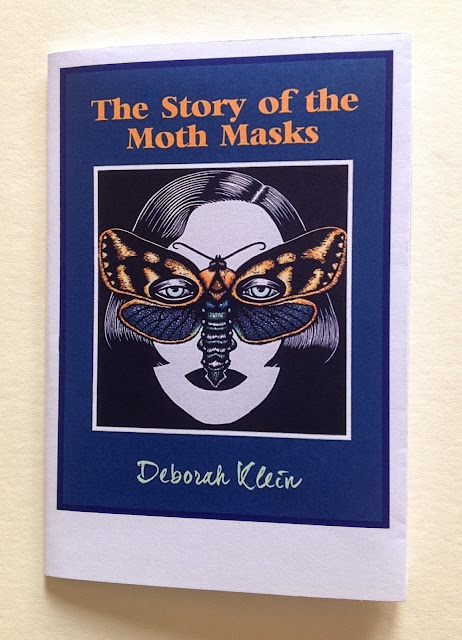 Pictured above is The Story of the Moth Masks, a mini-zine made in celebration of the group exhibition Eventide at Mornington Peninsula Regional Gallery. The cover girl is Cossodes lyonetii Moth Woman, the linocut I created for the show. Copies of the zine are also available at the gallery.

Eventide was curated by Rona Green. This coming Sunday, 26 June, between 2 - 3 pm, Rona, Euan Heng and I are presenting an informal floor talk at MPRG about our contributions to Eventide, ‘the magical moment when day meets night'. We’d love to see you there.

For those who can’t make the talk, but plan to visit the show, Eventide concludes on 3 July.
Posted by Deborah Klein at 9:43 AM

Art and the Environment, Art and Friendship

The last few days have reinforced something I am constantly aware of: although the internet and social media have many advantages - indeed, in the case of long-distance friendships, they are practically indispensable. But they are not, nor will they ever be, substitutes for meeting face-to-face.

On Friday morning in Melbourne I bumped into Steve Cox, an artist whose work I’ve long admired, but have never had the chance to get to know. We had a lively, energising conversation and recognised many mutual points of connection. Later that same day, he joined me, my partner Shane Jones and our friend Paul Compton for a couple of glasses of wine before Shane, Paul and I set off to see Resident Alien, a superb one-man play based on the final years of Quentin Crisp, starring one of Australia’s national treasures, Paul Capsis.

On Saturday evening the biennial exhibition Art Concerning Environment at Scope Galleries in Warrnambool was launched. It was such a pleasure to finally meet two of my favourite Instagram friends. Shirley Ploog (left) was a fellow finalist with her stunning work, Nature is Talking, are We Listening and Jo Lane (right) with her equally impressive Human Nature. We are standing in front of the winning work (before the official announcement, so we didn't know it at the time): Harry Nankin's The End of the Age of Entitlement: 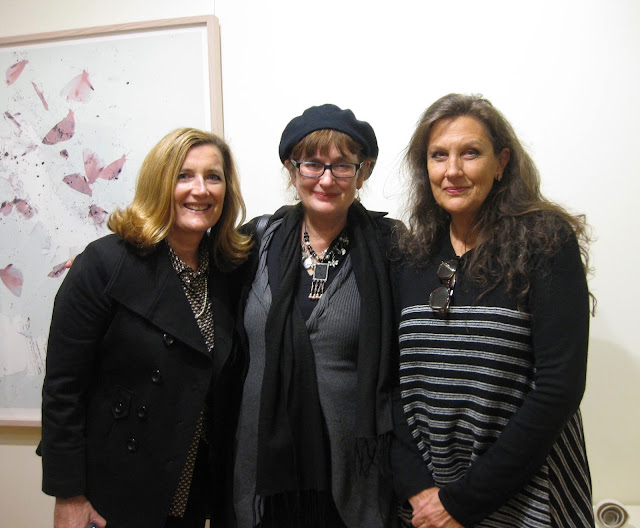 Carole Wilson, an old friend and now one of our neighbours at Ballarat, was another finalist. Carole is on the left in front of her work Field Notes – Woodland alongside her partner, Annie Drum. 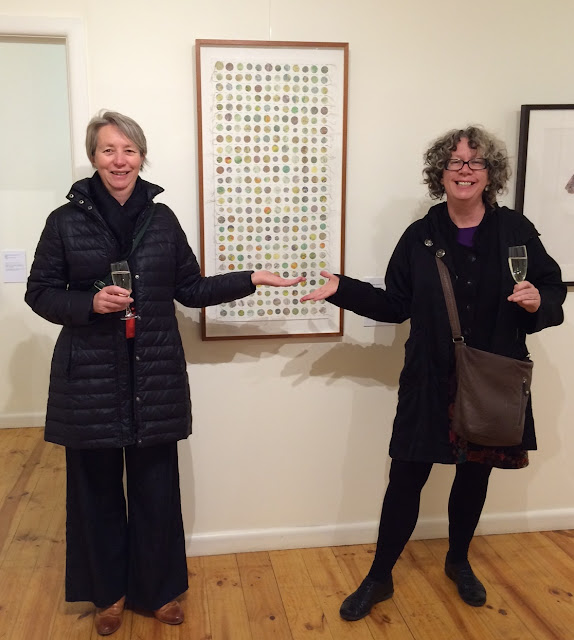 Directly below, L-R are myself, Carole Wilson, Annie Drum and Shane Jones in front of Actinus imperialis Beetle Woman: 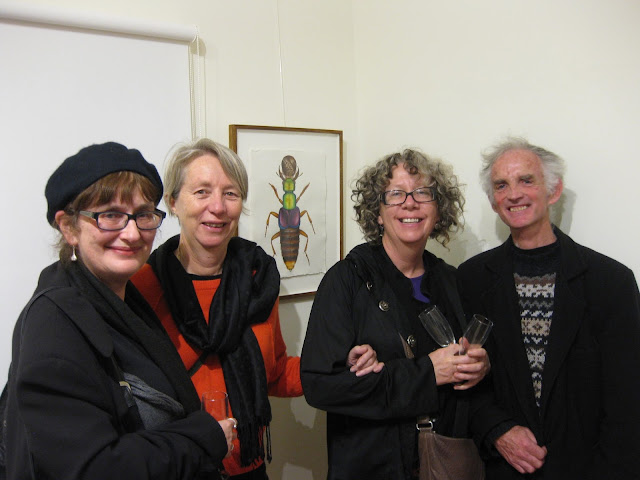 Our friend Debbie Hill, who is also Ballarat-based, is pictured below with her shortlisted work, Come Sinner, Come. (We've been talking about getting together nearer to home for at least a year now). 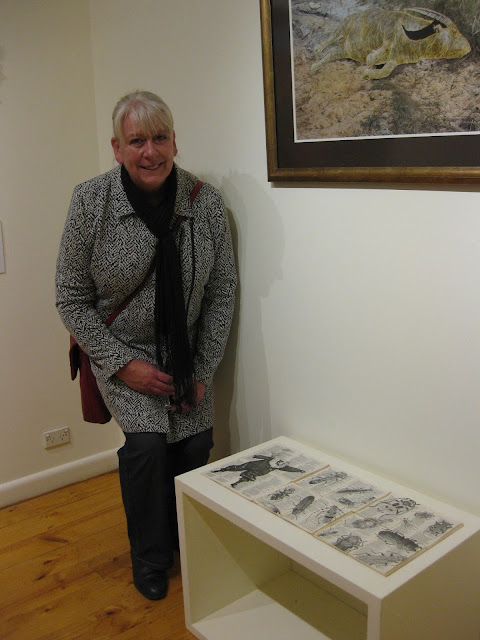 Marion Manifold, another old friend we haven’t seen for far too long, was a finalist with her linocut Southern Ocean Wreck. Here are Shane and Marion in front of her work: 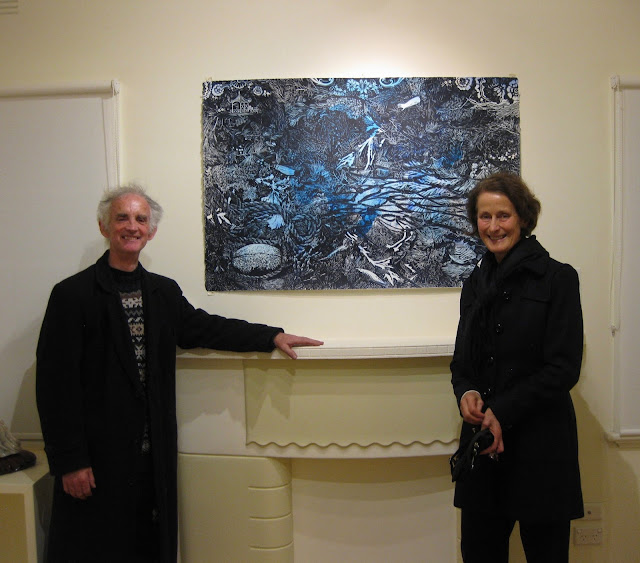 On Sunday afternoon, after a gap of ten years, we reunited with Ewa Narkiewicz and Michelle Reedy, who are in town for an all too brief visit. For over a decade they have been running the visionary Elephantstay in Thailand. I first met Ewa back in the 1990s when we were in a group exhibition at the National Gallery of Victoria organised by the Women's Art Register. Later, she and Shane (and also Carole Wilson) showed for a time at the same commercial gallery. Michelle formerly worked as a keeper at Melbourne Zoo before she and Ewa moved to Thailand to found Elephantstay. For more about Ewa and Michelle, go HERE. To learn more about Elephantstay, visit the informative Wikipedia page HERE.

PREVIEW: Linocut for artists and designers by Nick Morley 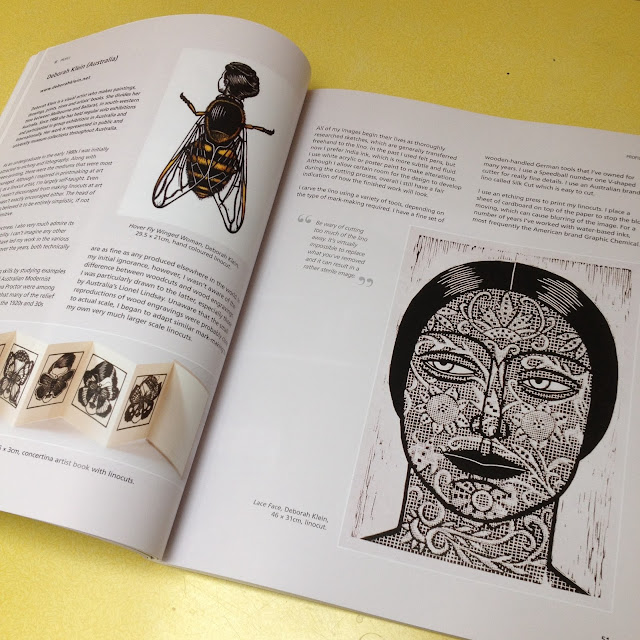 Linocut for artists and designers, the much anticipated book by Nick Morley (AKA Linocutboy) is due for publication in the United Kingdom on 10 June. Chapter 2 includes a double page spread on my linocuts, featuring the relief prints Hover Fly Winged Woman and Lace Face, along with my artist book, Women with Wings (see above).

Directly below is the front cover of the book, followed by further page views: 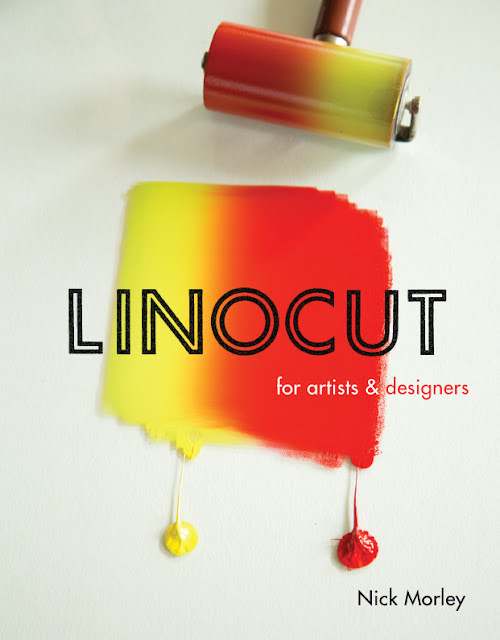 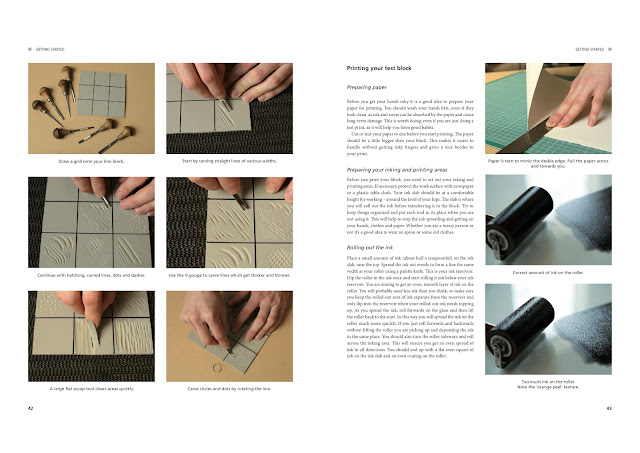 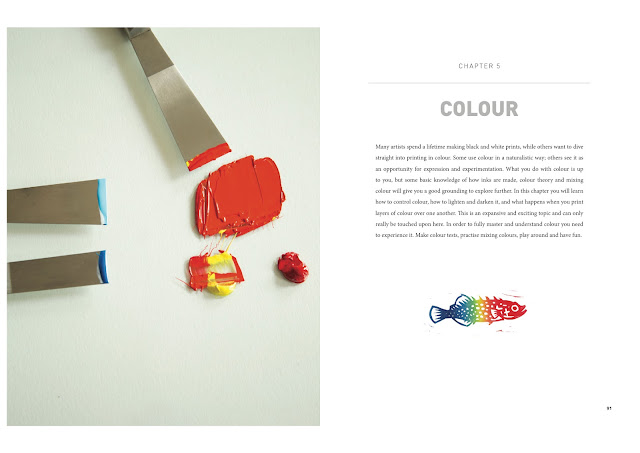 This comprehensive, lavishly illustrated book is a must-have for lovers of the linocut. For complete details and to pre-order a copy of your very own, visit:
http://linocutboy.bigcartel.com/product/linocut-for-artists-and-designers-book

Nick Morley's work is reproduced above, second from bottom. To see more of his work, go to: