Tricking the eye at the Art Gallery of Ballarat 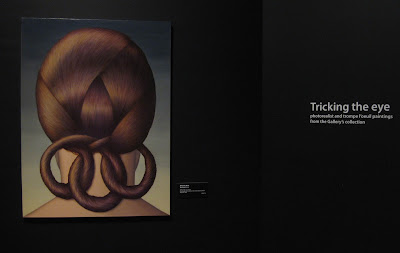 Vorticist 2, 2004, Acrylic and oil on linen, 122 x 91 cm (installation view)
Purchased with funds from the Colin Hicks Caldwell Bequest, 2005
After quite a long hiatus, Vorticist 2 is again on view at the Art Gallery of Ballarat. (For part of that time it was on tour with the 2008 survey exhibition Deborah Klein - Out of the Past 1995-2007). This time around it has been placed in an entirely different context, as part of an exhibition focusing on Photorealist and Trompe l’oeil works from the gallery’s permanent collection.

Although figurative, Vorticist 2 is not based on a specific source, photographic or otherwise. The work is principally an invention, so it’s intriguing to see it placed in this company. But then recurrently my pictures of anonymous women are also classified erroneously as portraits, despite the fact that I refer to them collectively as Non-Portraits. Then again, I’ve always maintained that my work remains open to individual interpretation…
Two paintings by my partner Shane Jones, which unquestionably fit the Trompe l’oeil category, are also included in the exhibition.
Posted by Deborah Klein at 10:07 AM

The Ghost of Artworks Past

Many moons ago, when my work was hovering uncertainly at a major crossroads, my Postgraduate Supervisor Euan Heng was both encouraging and perceptive. At this stage the new ideas were still mainly in my head; he also cautioned me that if I didn’t bring off what would be a radical change of direction, "Old work can come back to haunt you". For one who frequently suffers the torments of hell when an old work is exhumed, his warning hit home. But I knew I’d come as far as I could with the current imagery. I believed in my new ideas and change was inevitable, no matter what misgivings I might also have.

In fact what eventuated, namely the Pirate Jenny Prints suite of linocuts (1987) became a significant turning point, setting me on the path that, aside from the odd detour (and inevitable dead end) I tread with varying degrees of assurance to this day. I’m still rather proud of them. 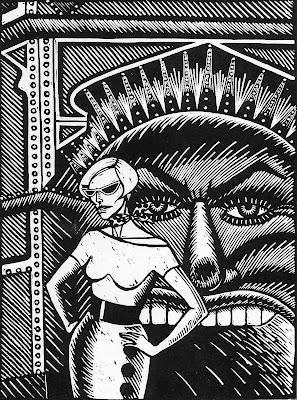 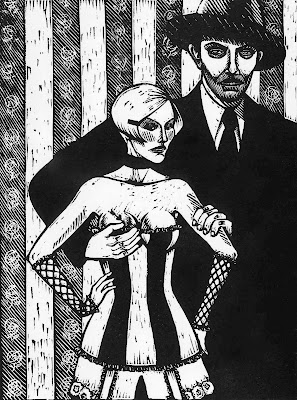 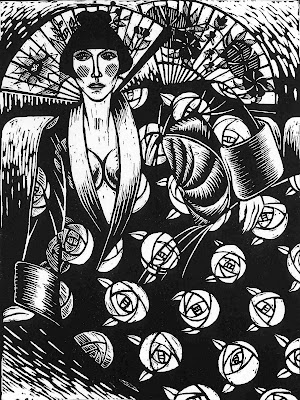 3 Pirate Jenny in a Kimono, 1987
Admittedly there are other instances when I don’t feel like crawling under the covers when the Ghost of Artworks Past pays an unsolicited call. But occasionally I’m confronted with some abomination that in some cases would have been better off being humanely destroyed.  I see nothing but glaring imperfections and think how much better the work would be had I made it today.
When I became a Master of Arts candidate in 1995 (once again under Euan Heng’s judicious supervision) my drawing style changed markedly. It was undoubtedly directed by my thesis, namely women in Film Noir and the Woman’s Picture. By mid 1996 the work had become less mannered and stylized as I gradually moved away from previous influences, including German Expressionism. As a result, it is mainly (although not exclusively) the pre-Film Noir and some early works from the series that have, for me at least, ‘dated’ and which have caused me the most grief. But I think it’s also fair to say that rather than existing solely as eternal testaments to my ineptitude, a few of these works have their good points, whether it’s the ideas behind them, or even isolated areas of technical competence. 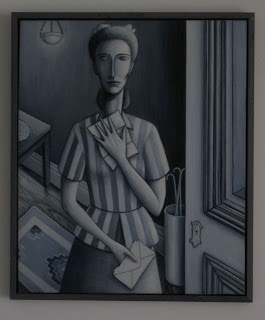 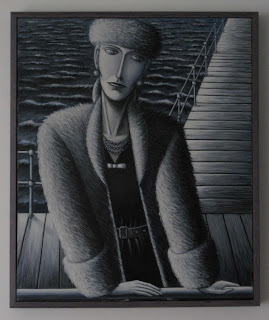 A selection of my old pictures, including several from that vexed pre-1996 period, now grace the walls of the house at Ballarat, thus creating some sorely needed space in our storage area in Melbourne. Some deserved to once again see the light of day far more than others, and these were hung soon after we moved in. But those I felt more ambivalent about remained stacked against a wall for nearly a year.  We finally hung them over the Christmas break. Several are in my studio. We are gradually learning to coexist and I realize that I might actually be able to learn something from them. It's starting to feel like it could be a positive place from which to begin a new year and a new body of work. 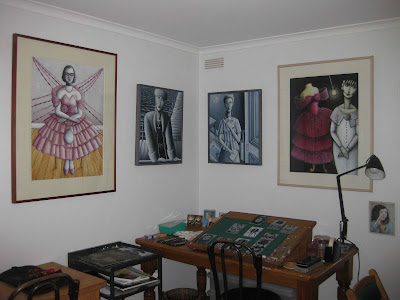 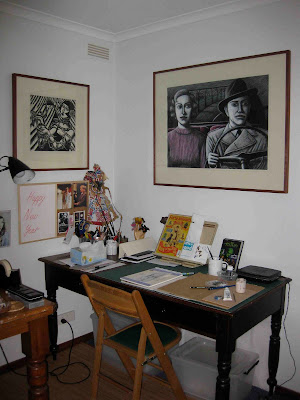 7 Studio view 2, January 2012
Pictured above (from top):
1 Pirate Jenny at Luna Park, 1987, linocut, 61.5 x 45.5 cm
2 Pirate Jenny and Mack the Knife, 1987, linocut, 61.5 x 45.5 cm
3 Pirate Jenny in a Kimono, 1987, linocut 61.5 x 46 cm
Pirate Jenny is a character in The Threepenny Opera, by Kurt Weill (music) and Bertolt Brecht (book and lyrics). Ostensibly set in London, its spiritual home was Berlin, where it premiered in 1928. I transplanted its original location to scruffy, pre-gentrified St. Kilda in Melbourne, where I was then living and working. The Pirate Jenny Prints were published by Port Jackson Press, Melbourne and subsequently toured nationally. Euan Heng wrote the introduction to the catalogue that accompanied the tour.
4 and 5 (see below)


Untitled, (c 1994) oil pastel, 76 x 56 cm
Unlike most of my work, this image is not connected to a thematically linked series.  This sad but spirited wallflower was inspired by a poignant group of photographs from the 1950s, taken at a high school dance when American film legend James Dean paid a return visit to the small town where he was raised.
Mildred Pierce on St. Kilda Pier*, 1995, oil on canvas, 61 x 51 cm
The Letter, 1995, oil on canvas, 61 x 51 cm
These are linked to the Film Noir series of the mid 90s. They are two of the few surviving paintings from that period. As the series progressed, I found that the nocturnal world of film noir was best served by the linocut medium. In fact both images were subsequently developed into linocuts. They were included, along with the linocuts, in my second solo exhibition at Australian Galleries, Melbourne, in 1996. (*For more on Mildred Pierce, see Blog Post February 12, 2011.)
The Red Dress and the White Dress, 1992, oil pastel, 74.5 x 54.5 cm
This drawing takes its points of departure from two of Dorothy Parker’s poems. It was originally part of a 1992 solo exhibition, my first at Australian Galleries in Melbourne. The exhibition focused on the lives and work of writers Dorothy Parker, Zelda Fitzgerald and Virginia Woolf. The series was also exhibited at Solander Gallery in Canberra.
7 Studio View 2, January 2012
Pictures from left:


Snake Charmer, 1996, linocut, 36 x 37.5 cm
Fairgrounds and circuses often feature in Film Noir. This is one work I’ve always had a certain fondness for.
Night Drivers, 1996, oil pastel, 55 x 75 cm
The danger inherent when anyone gets behind of the wheel of a car was exploited regularly in Film Noir. When researching this work, I derived particular inspiration from the superb Nicholas Ray film In a Lonely Place (1950) and the Bette Davis camp classic Beyond the Forest (dir. King Vidor, 1949, in which she utters the celebrated line, long beloved by Davis impersonators, "What a Dump!") This drawing was transposed into a linocut, which in my opinion worked much better.  Both versions also debuted at Australian Galleries, Melbourne in 1996.
Posted by Deborah Klein at 4:21 PM