... and another door opens

Here are some photos of the cosy area, newly set up on the ground floor of our place in Abbotsford that will serve as my Melbourne workspace for the immediate future. Although it is significantly smaller in scale than the studio I’ve just vacated, I think it will be quite serviceable, especially as most of my current work is also relatively small in scale. 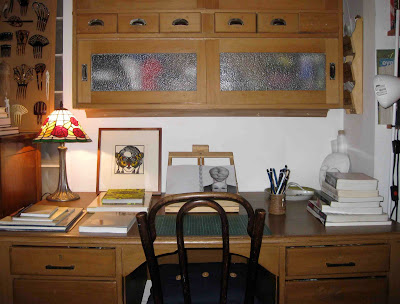 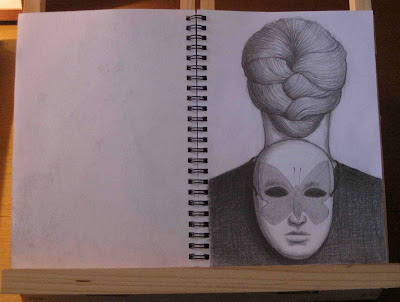 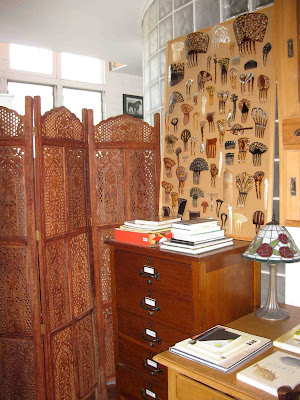 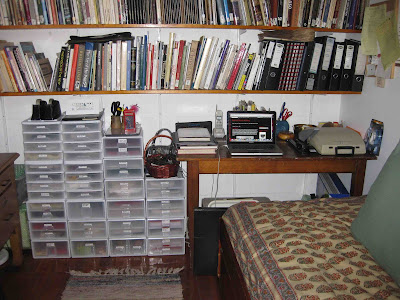 Pictured from top:
My fantastic desk, acquired from the local op shop.
Sketchbook detail.
Small plan cabinet purchased many years ago in Balaclava, topped by some of the combs and hairpins from my extensive collection. The carved screen, another recent acquisition, gives me some privacy, whilst still letting in some light. It also lends a touch of the exotic; at least I like to think so.
Transferred from my previous studio, these meticulously labeled and ordered drawers (see, I really am trying to mend my ways) contain all the paraphernalia that I need for my zine making activities.
Posted by Deborah Klein at 2:50 PM

In 2007 I took over a large room in the city of Melbourne that was to be my studio for over four years. Despite the frustration of persistent leaks (how many artists through the ages have had to endure those?) some of the most productively happy times of my life were spent there. Once I was inside, all else but the work fell away. The saga of the mysterious Moth Women, who first saw the light of day in my Abbotsford studio, continued here, and flourished. And here I created The enchanted hair ornaments, the multi-panelled painting which morphed into the fairy tale of the same name - the first story I ever wrote. More recently it was where the Winged Women linocuts and paintings were hatched. 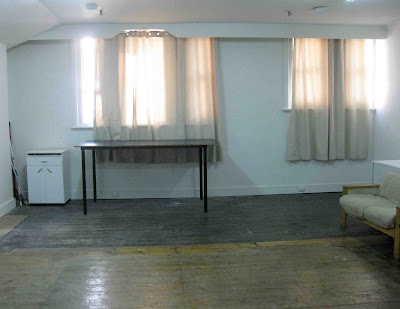 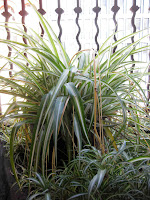 So now it ends. Notice has been given and although I have not quite vacated my studio, it is close to empty and my head and heart are already elsewhere. Last weekend on iPhoto I trawled through some of the umpteen photographs I have taken there over the years, and found I had tears in my eyes. There’s no denying the time is right to move on, but I will take a great many memories with me. I will also be taking the gargantuan spider plant from my little balcony – a living monument to survival against the odds. It was there when I moved in, puny and barely alive. The room had been vacant for some time, and because of the ongoing drought, the plant couldn’t even depend on rain water for sustenance. I’m not known for my green thumb, but having nurtured it back to life (it particularly seems to thrive on washing up water) there’s no way I’m leaving it behind.


Here are some before, during and after shots. As the pictures show, the walls I inherited were in dire need of repainting. I took over the studio in the full heat of summer. My partner Shane (who I can never thank enough, both then and now) came in at night and worked late with me. Hard, sweaty work, but more happy memories. After working for hours in seclusion, stepping out into the buzz of the city on a summer night always gave us a startling, but not unpleasant jolt. Sometimes we’d stop for a cooling beer at an outdoor café on Federation Square to relax and unwind before heading off home. 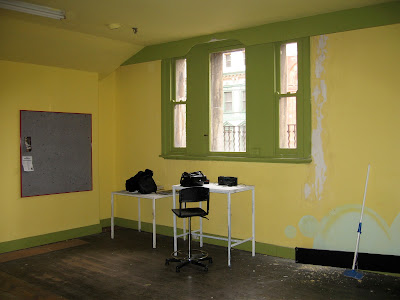 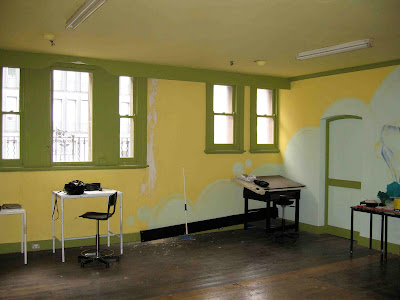 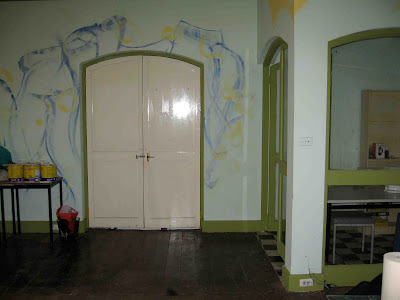 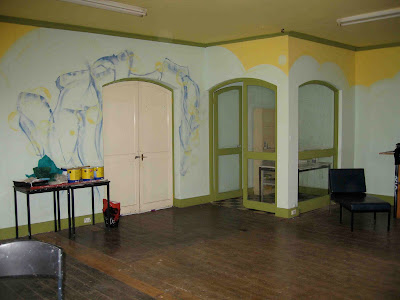 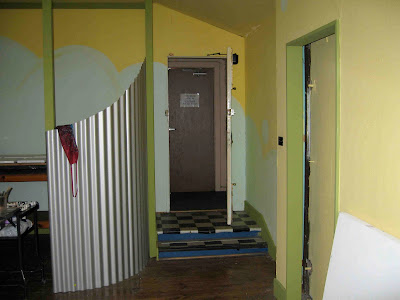 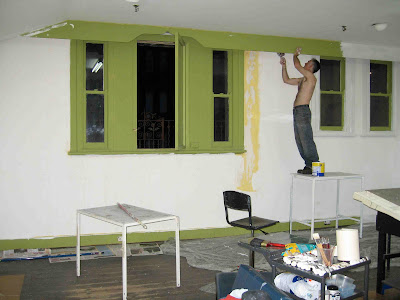 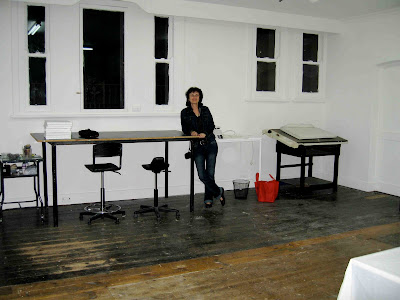 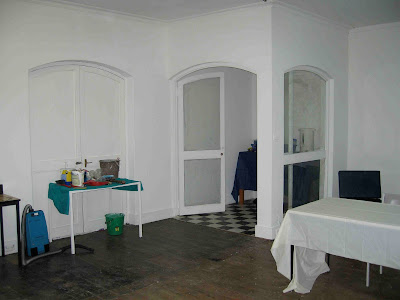 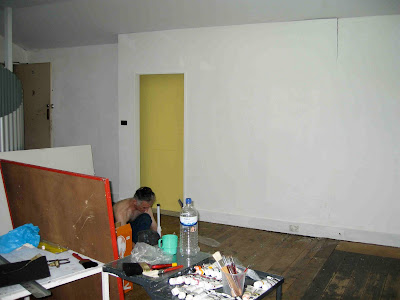 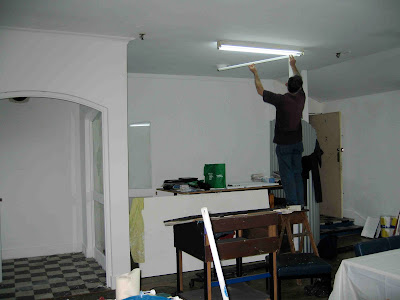 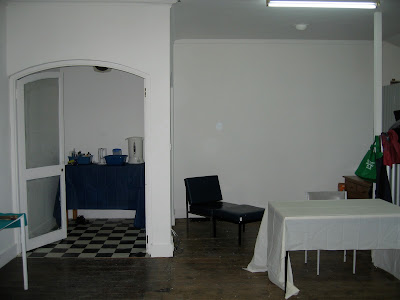 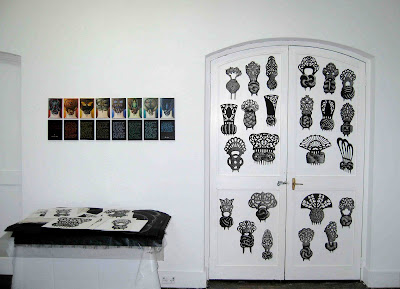 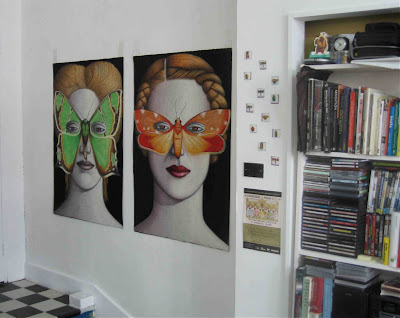 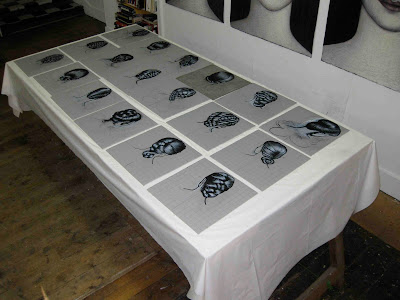 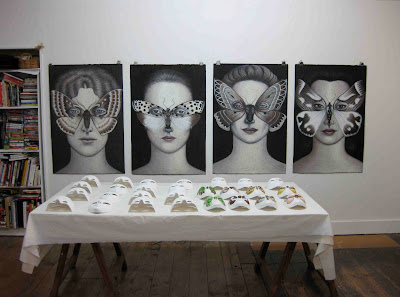 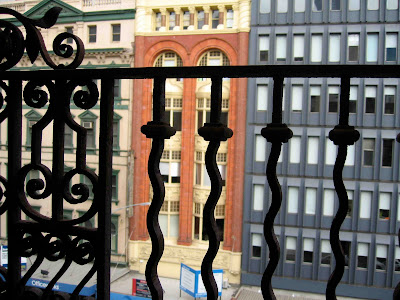 An old friend is taking over the studio. It’s a solace to know I can still drop in occasionally to visit her, the other artists on my floor, Francine in the office, who has been such a good friend to us all, and my old studio. It’s a shame the owners of this fine old building don’t care about it as much as its tenants do.

Now Shane and I are just about back where we begun, living and working in our place at Abbotsford. But more of this and other developments once I am settled and sorted.
Posted by Deborah Klein at 6:32 AM