The Girl in the Tower

There was once a maiden who had lived her entire life in a tall tower in the middle of a dark and almost impenetrable wood. Her father had locked her in there many years before. No one could exactly remember why any more. It seems that fathers did that a lot in the olden days. At least he made sure that she had a substantial store of provisions before vanishing completely from her life. The tower had no door - just a window at the very top at which the girl would sit and dream of all the wonderful adventures she would have, if only she could escape.

With the passing of time it seemed her empty days grew longer and longer - and so did her hair. Just looking after it - washing, drying, brushing, combing and braiding it - became a full-time job, but certainly not one that relieved the tedium of her days.

Stories of her beauty and her lustrous locks spread far and wide until one day a handsome prince rode by on a milk white steed, curious to see if the rumours he had heard were true. A single glance at the figure in the tower told him they were. But it seemed he would forever be condemned to worship her from a distance.

Next minute there was a flurry of movement at the window. In no time at all the girl had lowered her braid - it was now the exact same height as the tower - and was beckoning him to climb.

In even less time he had clambered up and was by her side. The handsome prince was full of tales of his great adventures in the outside world, of vast armies he had defeated, of entire kingdoms he had conquered and of countless maidens he had wooed and won. But none of these maidens, he assured her, could compare to her, because not one of them had such long and wondrous hair.

The girl begged to be able to join him in his adventures. But of course her hair would be a hindrance and she would have to cut it off.

He begged her not to do so - it was what made her so uniquely beautiful. He could never feel the same way about her without her glorious long hair.

They argued late into the night until both fell asleep, exhausted. The prince awoke early the next morning, and to his disbelief, found he was quite alone in the room.

Then he noticed what looked like the end of his lover’s braid tied to the leg of a chair. The rest of it was trained out of the window.

He staggered across the room just in time to see the girl climbing to the ground. Her hair was cut short like that of a lowly pageboy. He couldn’t believe his eyes - she must have borrowed his sword while he slept.

Years of fighting to keep her increasingly unruly hair under control had made her something of an expert in knot and ropework techniques. She gave the braid a short, sharp tug. Immediately it loosened from the chair leg and fell noiselessly at her feet.

The prince’s heart leapt to his throat. “How on earth am I going to escape?” he cried.

“Grow your own hair!” answered the maiden as she mounted the milk white steed and rode off into the sunrise.
Posted by Deborah Klein at 10:53 PM

Labels: The Girl in the Tower 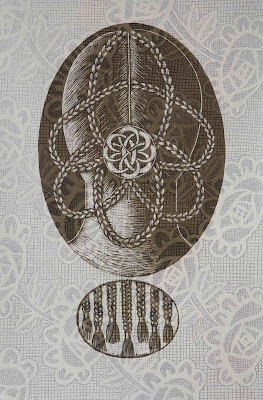 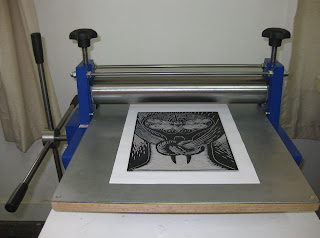 It finally arrived! Many thanks to Paul Compton and Shane Jones for delivering the press and carrying it up all those stairs.
Click on image to enlarge.
Posted by Deborah Klein at 8:58 PM