THE SUN SETS ON BACKSTORIES

After several extensions, all of them thwarted by lockdowns, Backstories, my solo show at Stephen McLaughlan Gallery, officially closes today. 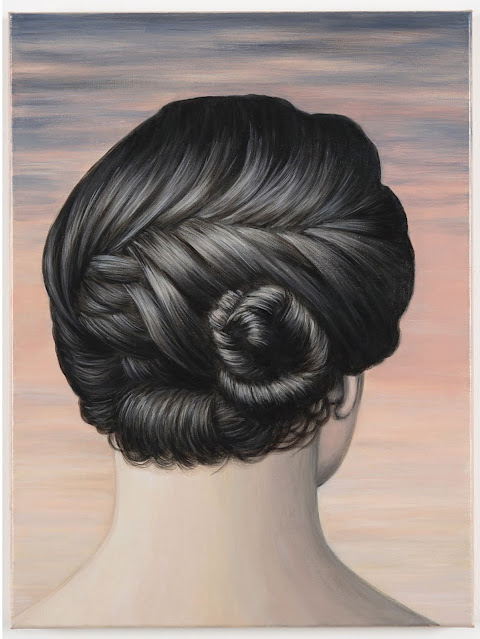 Sunday, pictured above, takes its title from the song in the Pulitzer Prize winning musical drama, Sunday in the Park with George (1984, music and lyrics by Stephen Sondheim, book by James Lapine). The musical was inspired by the George Seurat painting, A Sunday Afternoon on the Island of La Grande Jatte (1884-86). The song, Sunday, closes both its first and second acts. As some of you know, my partner Shane Jones and I are devotees of Sondheim’s work, as is Stephen McLaughlan. Accordingly, it seems doubly fitting to post the painting here, as a swansong to my own show.

Stephen, Shane and I are all supporters of Watch This, a visionary Melbourne-based theatre company that specialises in Sondheim’s works. The company’s 2019 production of Sunday in the Park with George was unforgettable. I saw it twice and on both occasions, the song brought tears to my eyes.

Coincidentally, Watch This held two preview events, including their 2019 season launch of Sunday in the Park with George at Stephen Mclaughlan Gallery. Pictured below is the company’s founder and first Artistic Director, Sonya Suares, who also co-directed the production. That’s Shane and I on the left in the following view. (Photos courtesy Sonya Suares via Stephen McLaughlan, reproduced with his kind permission). 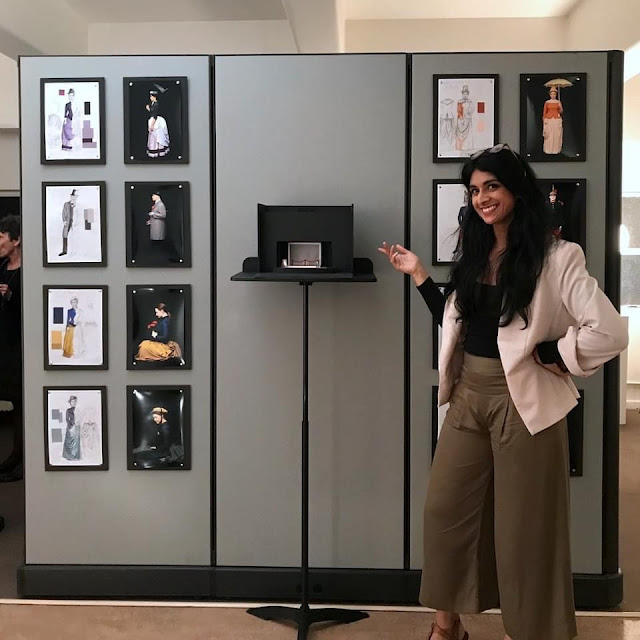 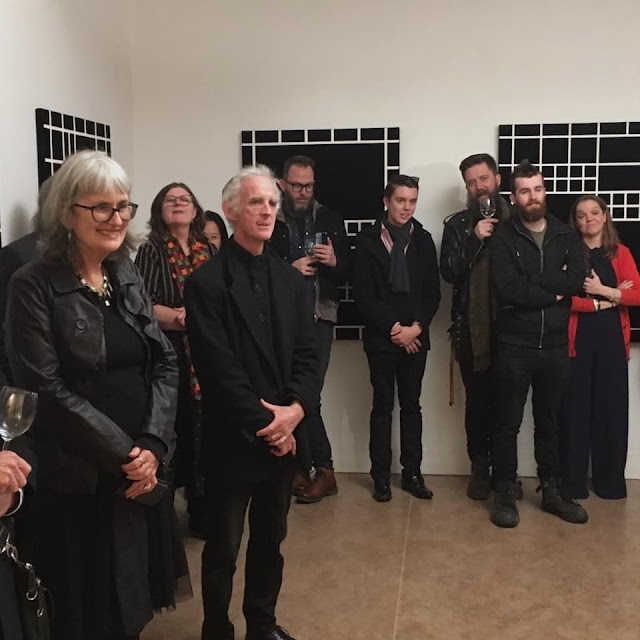 We were delighted that Sonya Suares was able to join us at the gallery for the memorable Backstories Artist Celebration on Saturday afternoon, July 31, 2021. Sonya and I are pictured with Sunday in the last photo below. (Photo credit: Julie Keating).

After several postponements, the next Watch This production, Into the Woods, will be performed early next year at Melbourne Meat Market, running from Saturday January 15 - Sunday January 23. While Sondheim’s extraordinary revisionist take on fairy tales didn’t directly inspire my own fairy tale-related works (including the anthology of feminist fairy tales, There was once…)  it certainly added fuel to the fire. For further information about Into the Woods, including performance dates and times, visit Watch This HERE.

Before heading for Melbourne to farewell Backstories (see previous post) I’d like to extend one last thank you to Stephen McLaughlan, Shane Jones, the many people who visited the exhibition and those who have acquired works. Against all the odds, “on an ordinary Sunday”,* Backstories is finally having its fairy tale ending. 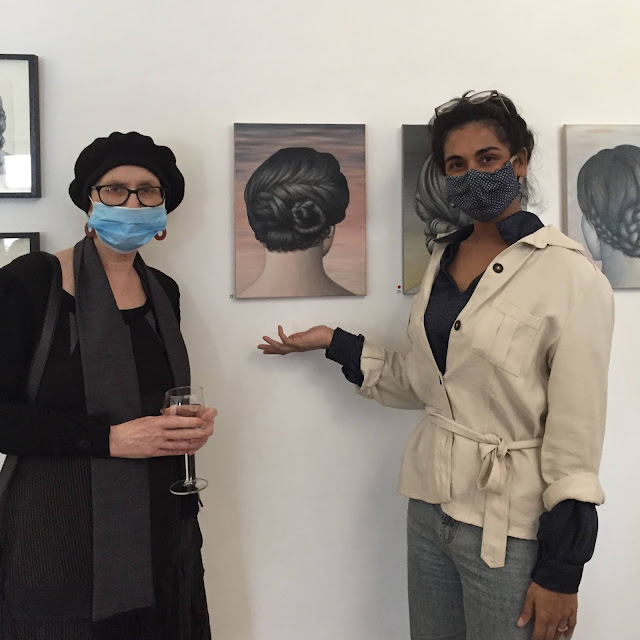 *From Stephen Sondheim’s lyric for Sunday. To see the song performed in the original production of Sunday in the Park with George, go HERE.

Posted by Deborah Klein at 7:10 AM 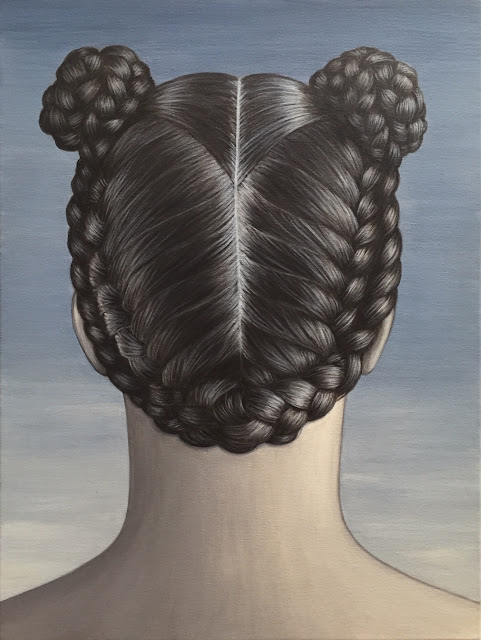 From this evening, our little corner of the world is opening up again. Travel restrictions between Melbourne and Victorian regional areas are being lifted, so I will be able to bid Backstories, my exhibition at Stephen McLaughlan Gallery, a final, fond farewell. I’ll be there on the last day of the show, Sunday October 31, from 3 pm, if you’d like to drop by and say hello.

Viewing times for the show’s final two days are below.

Posted by Deborah Klein at 9:59 AM 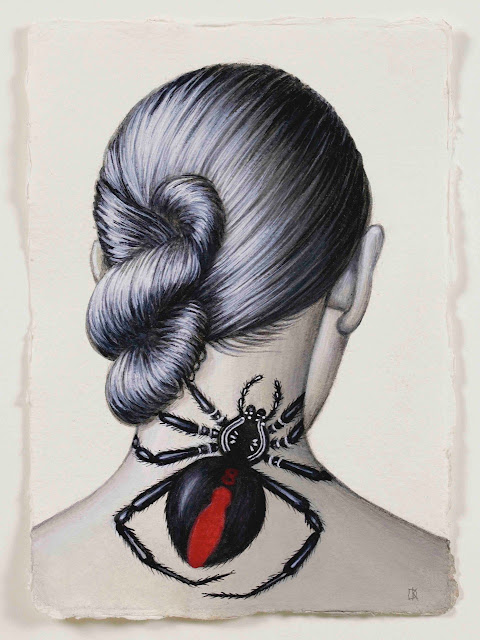 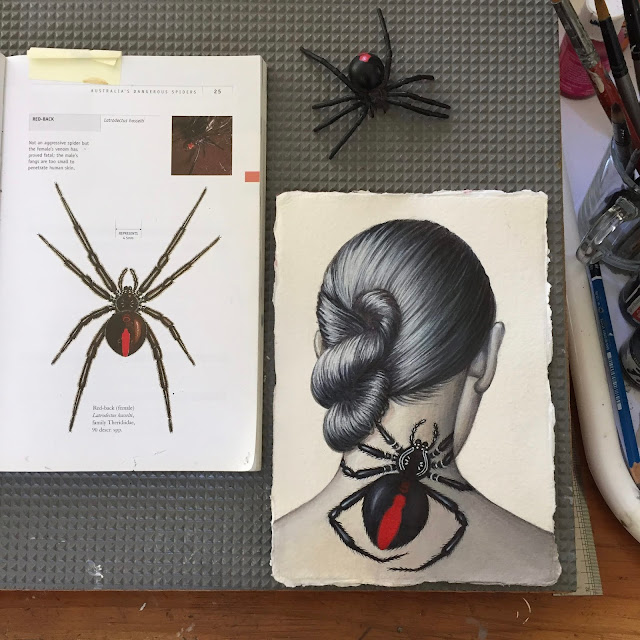 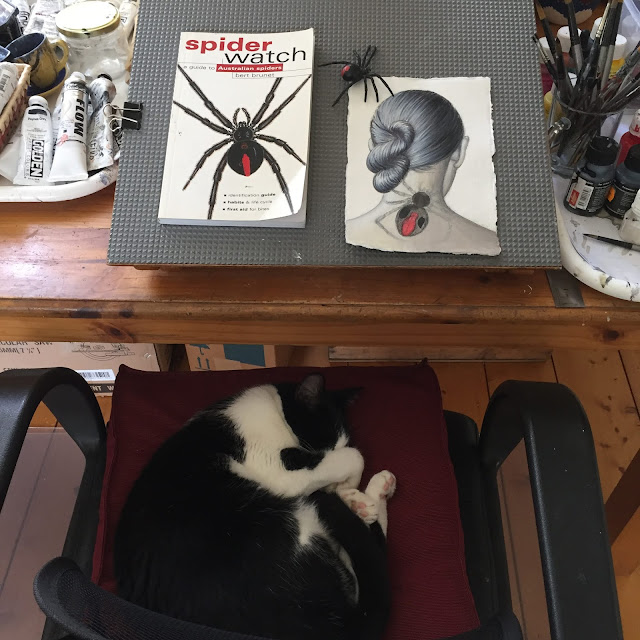 After a long spell in lockdown, Backstories will re-emerge for a final viewing opportunity this Hallowe’en weekend, October 30 - 31. Note the special viewing times below.🕷

Posted by Deborah Klein at 8:08 AM

A time for farewells 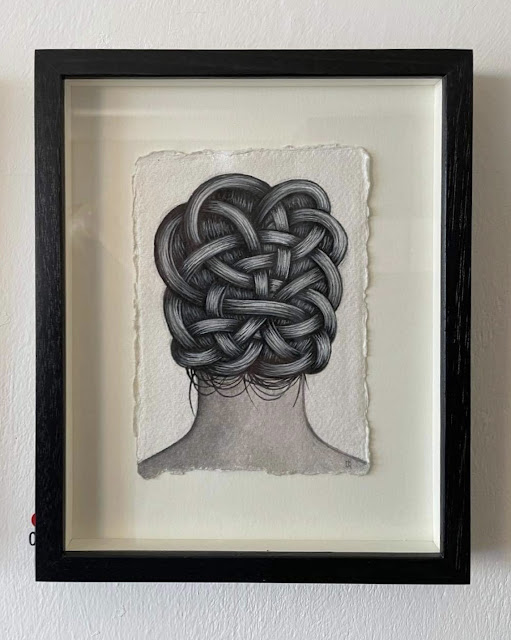 One Way (pictured above) is one of several drawings that had their genesis during a particularly productive residency at The Art Vault in Mildura in 2017. Little did I know, it would be my last ever residency there, as this unique, irreplaceable gallery is currently in the process of closing down. The Art Vault has been a big part of my life; I’ll miss it very much, as will countless others, especially the many other artists they nurtured and encouraged.

Navigator, pictured left in the following view, is a more recent work and Chainmail on its right, was also completed during the 2017 Art Vault residency. 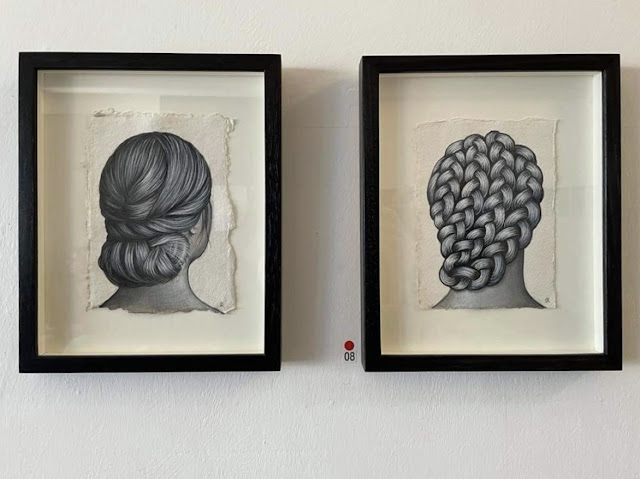 It seems this is a time for farewells. All three works are part of my solo show, Backstories at Stephen McLaughlan Gallery which is coming out of lockdown to see out its final two days this coming weekend, 30 - 31 October.

Photo credit for the above installation views at Stephen McLaughlan Gallery: Kathryn Ryan and Julie Keating. All works are ink and gouache on Khadi paper, 15.5 x 11 cm. 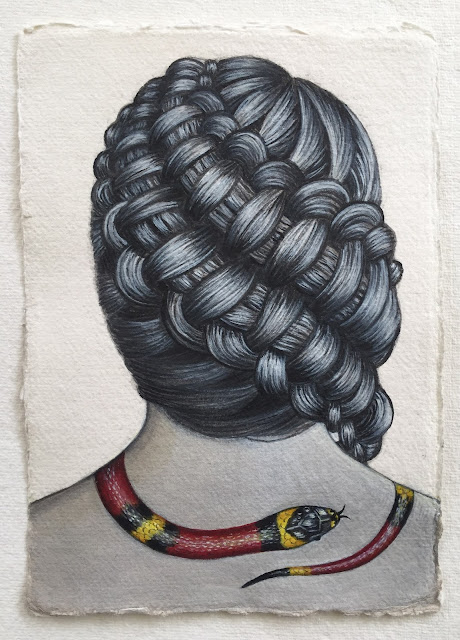 Pictured above: Mimic (Snake Tattoo), 2019, pigmented drawing ink and gouache on Khadi paper, 21 x 15 cm, followed below by an installation view of the work as part of my current solo show, Backstories, at Stephen McLaughlan Gallery.

The symbolism of the snake is multi-faceted. Historically, snakes and serpents are representative of the creative life force. The snake is a signifier of transformation, healing, fertility, rebirth and immortality, based primarily upon its ability to shed its skin. 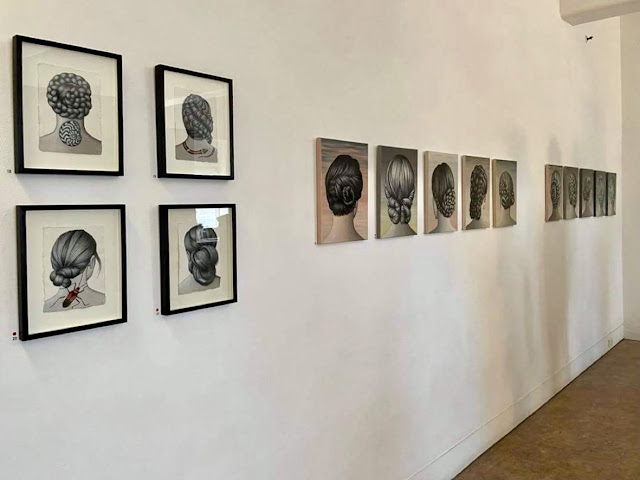 Backstories has been in lockdown since early August, but as of next weekend, October 30 - 31, it will reopen for a final viewing opportunity. Huge thanks to Stephen McLaughlan for making this happen, and for his elegant invitation design for the special viewing. (See previous post).

Photo credit for Mimic: the artist

Posted by Deborah Klein at 9:54 PM 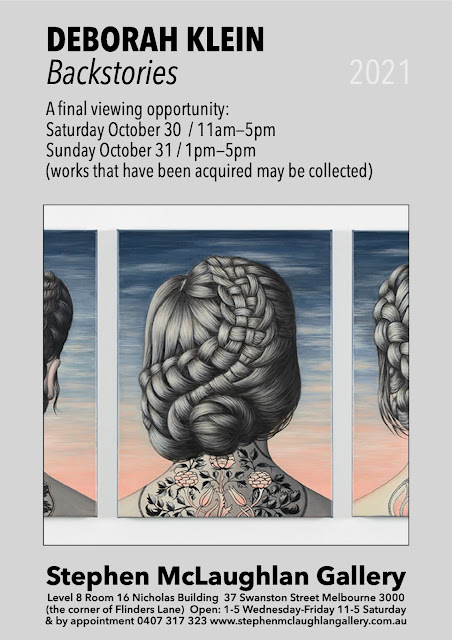 Backstories, my solo show at Stephen McLaughlan Gallery, was in its final days when the present lockdown was announced. Sadly, it has remained in limbo ever since.

This morning I received the happy news that Backstories can finally end its run. The exhibition will reopen for one last weekend on Saturday October 30 - Sunday October 31. For those who missed out on seeing Backstories, or would like to visit one last time, this is your opportunity.Stephen McLaughlan GalleryLevel 8 Room 16 Nicholas Building 37 Swanston Street Melbourne 3000(On the corner of Flinders Lane)T: 0407 317 323  E: st73599@bigpond.net.au Gallery hours: Saturday October 30: 11 am - 5 pmSunday October 31: 1 - 5 pmPictured top: Three Women, 2021, triptych, acrylic on linen (detail).

Posted by Deborah Klein at 9:47 AM 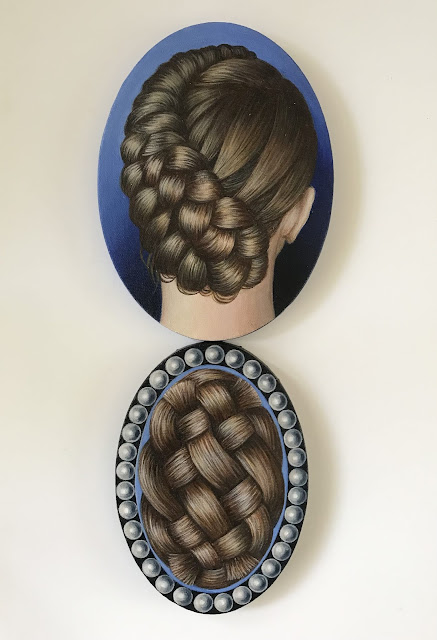 In recent news, I have postponed Rückenfigur, my solo show at Queenscliff Gallery. It wasn’t a decision that was made lightly, but uncertainty about the transition out of lockdown coupled with some health-related issues led to the realisation that I had little choice. Fortunately Queenscliff Gallery’s Soula and Theo Montalvanos have been able to slot me in for May/June 2022 and I thank them for their continued support, understanding and flexibility.

The upside of this is that I will now have considerably more time to create works for the show, which will be all the stronger for it. I’ll be sharing a selection of these over the coming months, beginning with the work featured here.

Posted by Deborah Klein at 7:00 PM