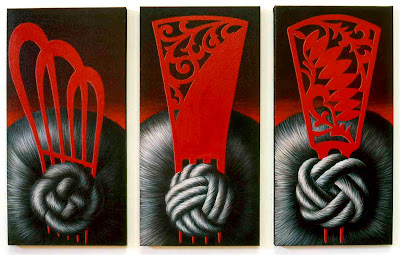 This work has recently been acquired for the Art Collection of Deakin University.
Posted by Deborah Klein at 6:07 AM

A Work in Progress 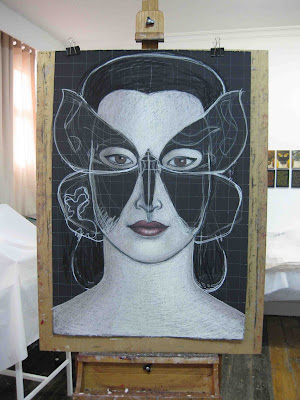 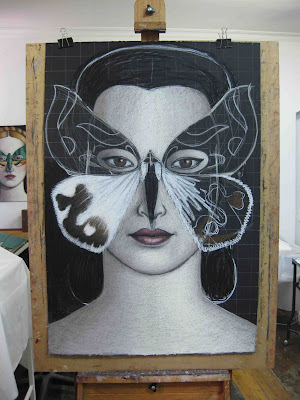 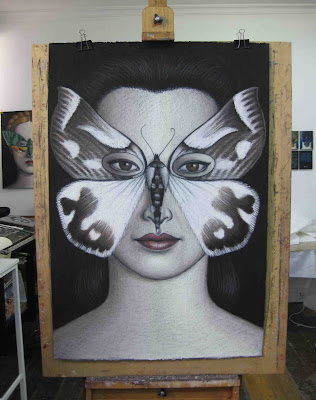 Click on images to enlarge.
Posted by Deborah Klein at 1:05 PM

Labels: A Work in Progress 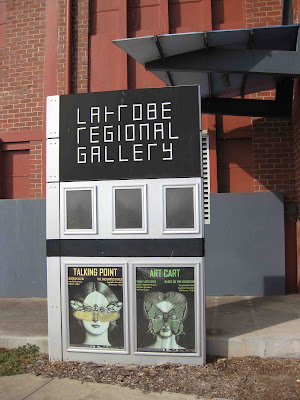 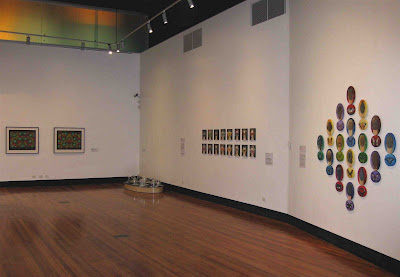 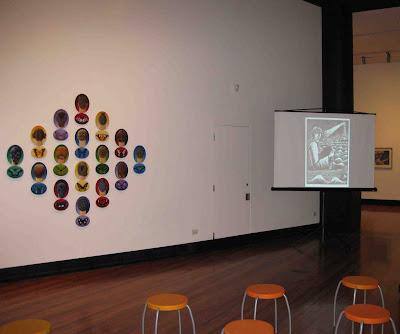 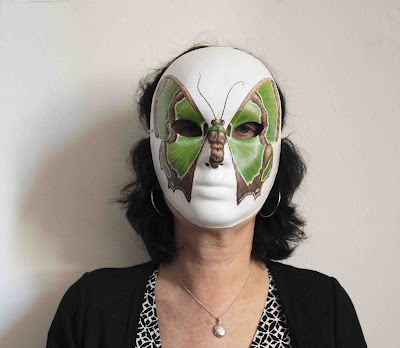 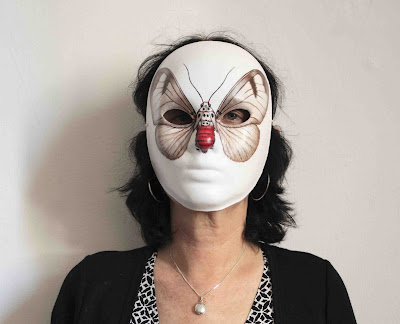 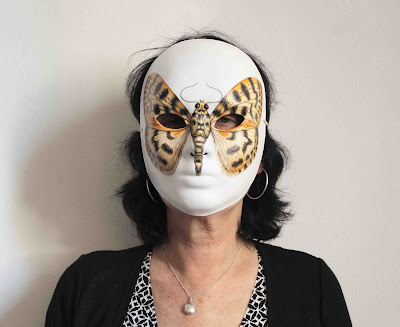 Acrylic on papier mache masks.
Photographs by Tim Gresham.
Posted by Deborah Klein at 7:20 AM 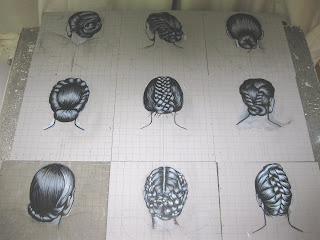 Click onto images to enlarge.
Posted by Deborah Klein at 10:58 PM 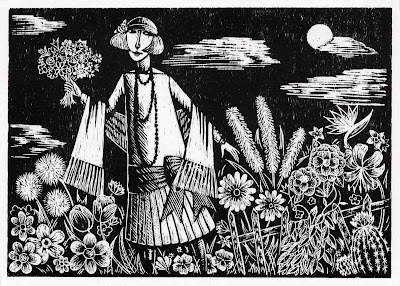 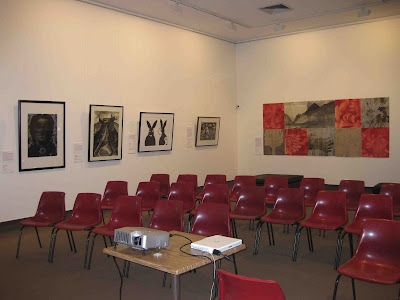 Women, Art and Politics is curated by Lorri Lambert. The exhibition explores issues informing the work of female artists represented in the permanent collection of Swan Hill Regional Art Gallery. 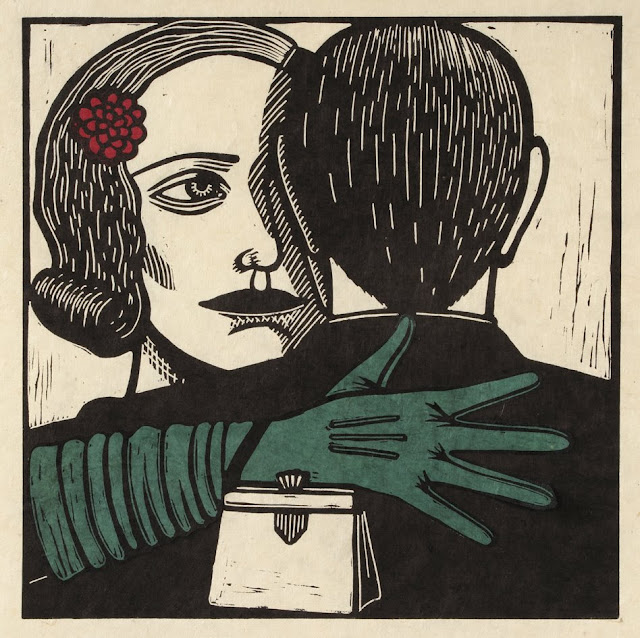 Why, thank you so much. I'd adore to.
I don't want to dance with him. I don't want to dance with anybody. And even if I did, it wouldn't be him. He'd be well down among the last ten. I've seen the way he dances; it looks like something you do on Saint Walpurgis Night. Just think, not a quarter of an hour ago, here I was sitting, feeling so sorry for the poor girl he was dancing with. And now I'm going to be the poor girl. Well, well. Isn't it a small world?

....... What can you say, when a man asks you to dance with him? I most certainly will not dance with you. I'll see you in hell first. Why thank you. I'd like to awfully, but I'm having labour pains. Oh, yes, do let's dance together - it's so nice to meet a man who isn't a scaredy-cat about catching my beri-beri. No. There was nothing for me to do, but say I'd adore to. Well, we might as well get it over with. All right, Cannonball, let's run out on the field. You won the toss; you can lead.

Why, I think it's more of a waltz, really. Isn't it? We might just listen to the music a second. Shall we? Oh, yes, it's a waltz. Mind? Why, I'm simply thrilled. I'd love to waltz with you.

I'd love to waltz with you. I'd love to waltz with you. I'd love to have my tonsils out. I'd love to be in a midnight fire at sea. Well, it's too late now. We're getting under way. Oh. Oh, dear. Oh, dear, dear, dear. Oh, this is even worse than I thought it would be. I suppose that's the one dependable law of life - everything is always worse than you thought it was going to be. Oh, if I had any real grasp of what this dance would be like, I'd have held out for sitting it out. Well, it will probably amount to the same thing in the end. We'll be sitting it out on the floor in a minute, if he keeps this up.

I'm so glad I brought it to his attention that this is a waltz they're playing. Heaven knows what might have happened, if he'd thought it was something fast; we'd have blown the sides right out of the building. Why does he always want to be somewhere that he isn't? Why can't we stay in one place just long enough to get acclimated? It's this constant rush, rush, rush, that's the curse of American life. That's the reason that we're all of us so - Ow! For God's sake, don't kick, you idiot; this is only second down. Oh, my shin. My poor, poor, shin, that I've had since I was a little girl!

Oh, no, no, no. Goodness no. It didn't hurt the least little bit. And anyway, it was all my fault. Really it was. Truly. Well, you're just being sweet to say that. It really was all my fault.

.......I'm past all feeling now. The only way I can tell when he steps on me is that I can hear the splintering of bones. And all the events of my life are passing before my eyes. There was the time I was in a hurricane in the West Indies, there was the day I got my head cut open in the taxi smash, there was the night the drunken lady threw a bronze ash-tray at her own true love and got me instead, there was that summer what the sailboat kept capsizing. Ah, what an easy, peaceful time was mine, until I fell in with Swifty here. I didn't know what trouble was, before I got drawn into this danse macabre. I think my mind is beginning to wander. It almost seems to me as if the orchestra were stopping. It couldn't be, of course; it could never be. And yet in my ears there is a silence like the sound of angel voices....

Oh, they've stopped, the mean things. They're not going to play any more. Oh, darn. Oh, do you think they would? Do you really think so, if you pay them twenty dollars? Oh, that would be lovely. And look, do tell them to play this same thing. I'd simply adore to go on dancing.