This post features watercolour reproductions of several newly discovered species. These diminutive insect women will be housed in a miniature plan cabinet, which will in turn reside in my burgeoning personal Wunderkammer. They are related to the Moth Masks showcased in my blog post of June 7.

The Wunderkammer (also known as a Cabinet of Wonder, or Wonder Room) originated in Renaissance Europe and was a forerunner of museums. Applying modern terminology, exhibits in these extensive, eclectic and frequently eccentric privately owned collections could generally be grouped under categories including Archeology, Geology, Ancient History, Art, Religious Relics, Ethnography, Antiquities and Natural History. Many examples of the latter were wondrously fantastical, for example, unicorn horns or the equally dubious Vegetable Lamb of Tartary.

Unnatural history specimens such as these were precursors to the similarly improbable exhibits later associated with P. T. Barnum's American Museum, which opened in January, 1842 - most notably, the grotesque mummified ‘‘Feejee” Mermaid pictured on the right (in reality, a monkey’s torso joined to the tail of a fish). Barnum’s museum of oddities (which also included a flea circus) was a precursor to carnival sideshows.

Since childhood I’ve been attracted to science fiction movies of the 1950s and 60s, including The Fly (1958, d. George Langelaan) and The Wasp Woman (1959, d. Roger Corman). Although not primary sources, these films have undoubtedly exerted some influence on the current work.

The series also reflects my long-term engagement with British portrait miniatures; indeed, these are among the smallest images I’ve yet produced.

This is my first sustained effort with watercolours, although I’ve been drawn to them for some time. When in London towards the end of 2011, I bought a set of Winsor and Newton Artists’ Watercolours. I’m finding the new medium challenging, hugely pleasurable – and rather addictive. 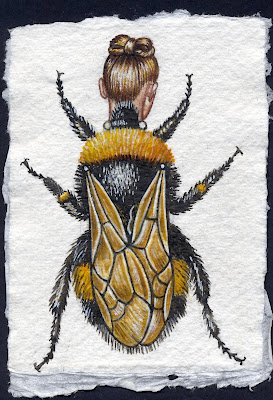 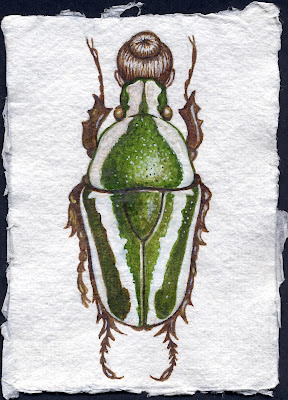 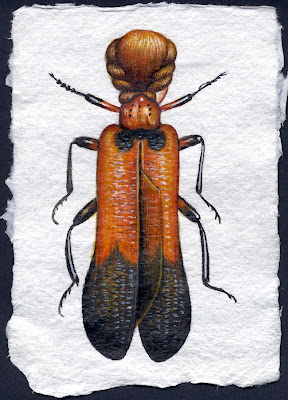 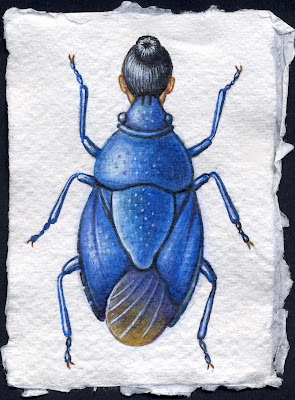 Posted by Deborah Klein at 8:17 AM