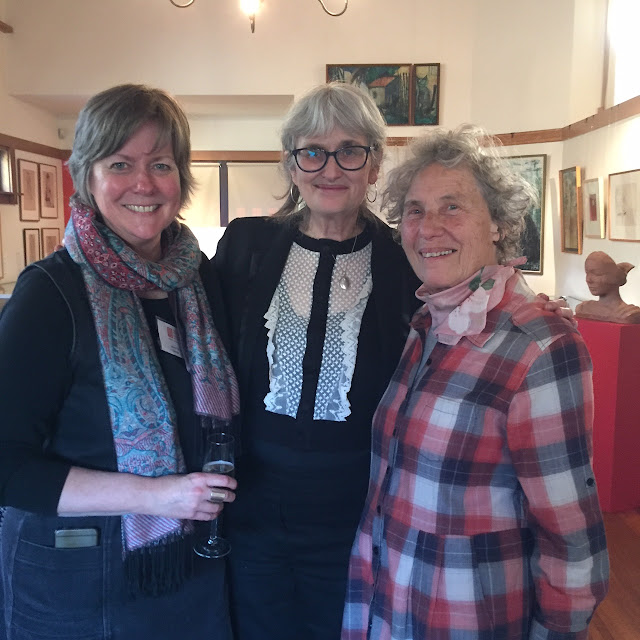 Above and below are selected highlights from yesterday’s artist talk at Duldig Studio museum and sculpture garden, beginning with a snapshot of myself with two of its former Directors. On my left is Jenny Port and to my right is Eva de Jong-Duldig, daughter of Karl and Slawa Duldig and Founder and Patron of the museum.
After her mother died in 1975, Eva assisted her father in his studio. In the years following his own death in 1986, she took the first steps towards establishing Duldig Studio as a not-for-profit public museum and art gallery, keeping its contacts intact and undertaking the restoration of the house. She was the museum’s Founding Director when it opened to the public in 2002 until her retirement from the position in 2014. To learn more about Eva, click HERE and scroll down.
To say it was a delight and an honour to meet her doesn’t begin to cover it.

In 2017, Eva completed her family memoir, Driftwood. I’ll treasure the signed copy she presented me with after my talk, and can’t wait to start reading it. 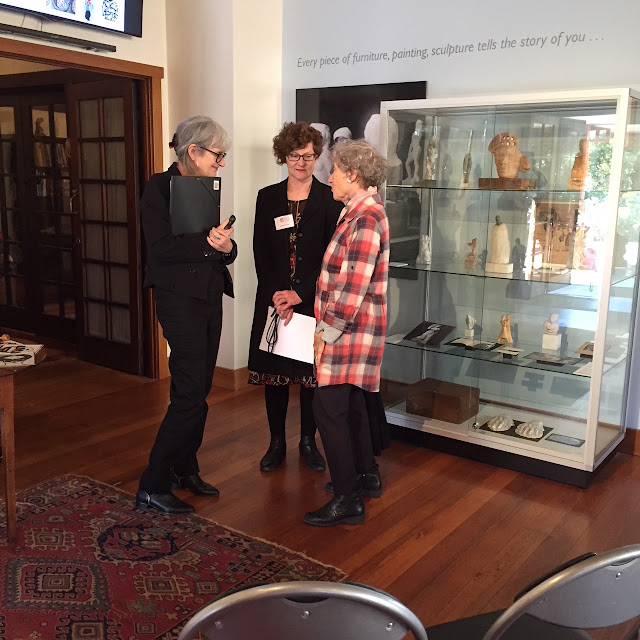 My talk was introduced by Melinda Mockridge, Education and Public Programs and Co-Curator of the museum's current exhibition, SLAWA: Modernist Art and Design. 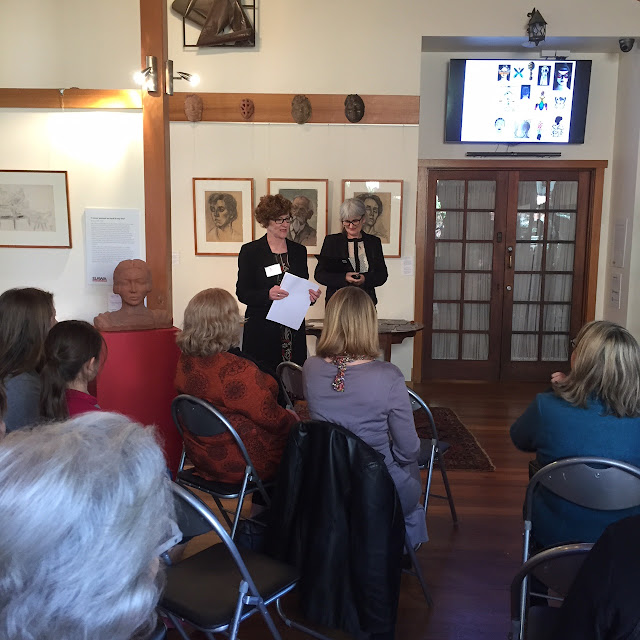 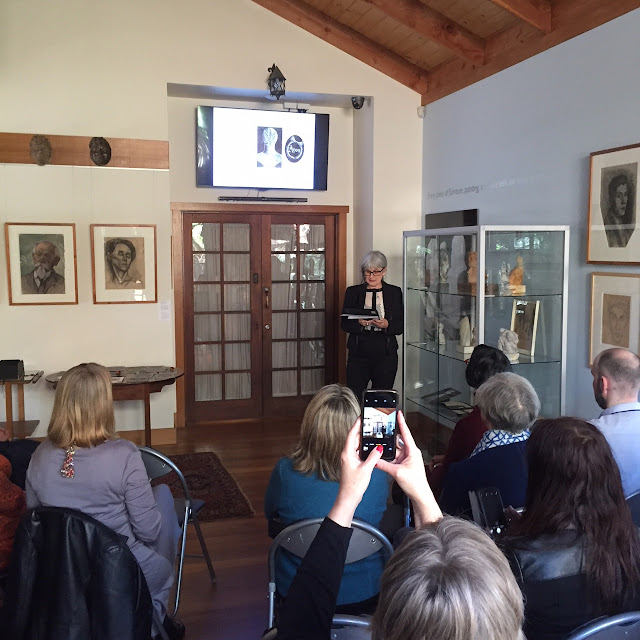 Directly after my presentation Shane and I were invited to the farewell event of another Director of the museum. After an extremely productive year at the helm, Jenny Port is retiring - at least from that position - although her association with Duldig Studio will continue. 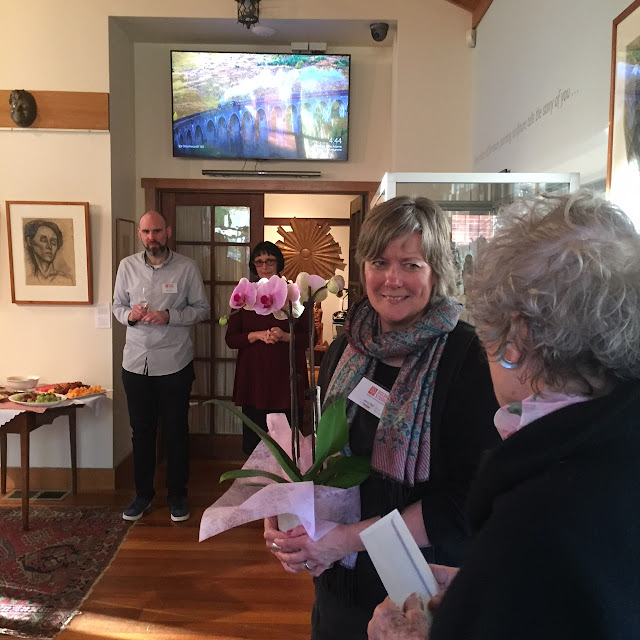 Jenny was given a wonderful sendoff by Antony de Jong and Ewa de Jong-Duldig. 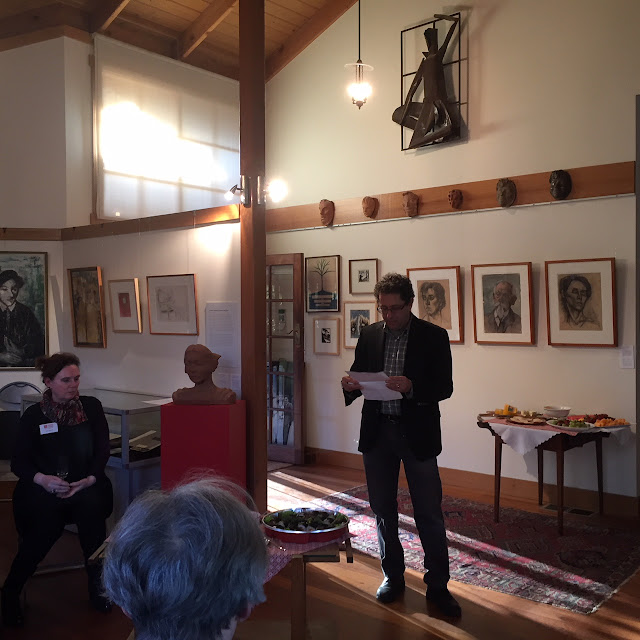 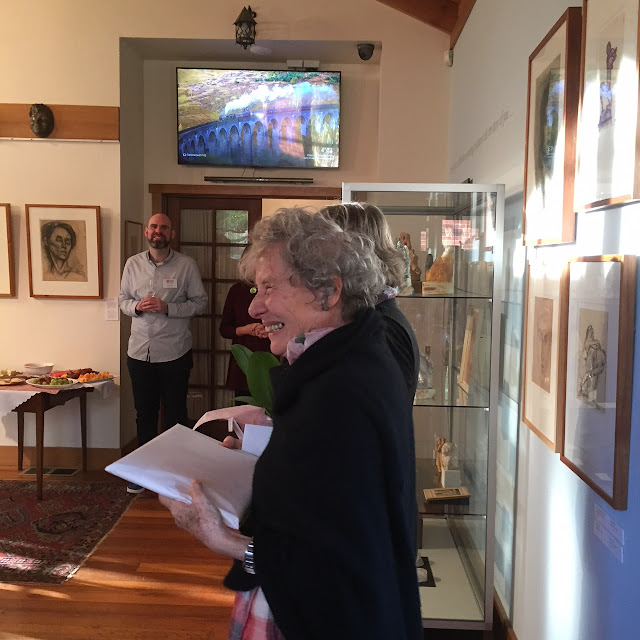 Warmest thanks to the Duldig Museum for inviting me to be the first speaker in their second series of Creative Women in Focus talks and to everyone who came along. You were a fantastic audience, who made this usually nervous public speaker feel completely at her ease.

A visit to Duldig Studio 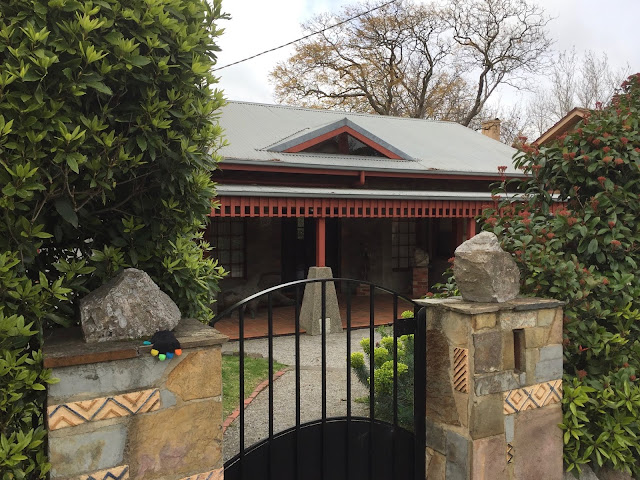 On Tuesday Shane Jones and I visited Duldig Studio museum and sculpture garden, formerly the home of artist/inventor Slawa Horowitz-Duldig and her artist husband Karl Duldig, whose sculptures feature in the last five views in this post. That’s me directly below, left, with Jenny Port, Director, Duldig Studio museum and Melinda Mockridge, Education and Public Programs and Co-curator of the museum’s current show, SLAWA: modernist art and design. 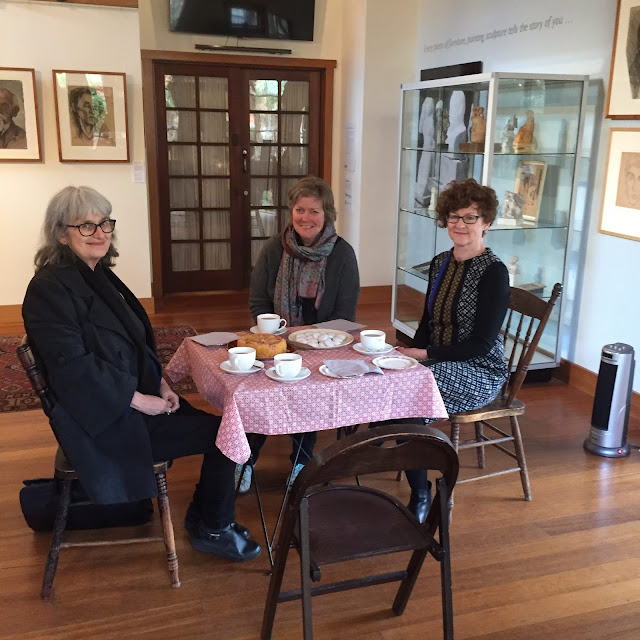 This is first exhibition to focus entirely on Austrian-Australian modernist Slawa Horowitz-Duldig (1902-1975), whose story is told through her remarkable drawings, sculptures, fashion and furniture design. 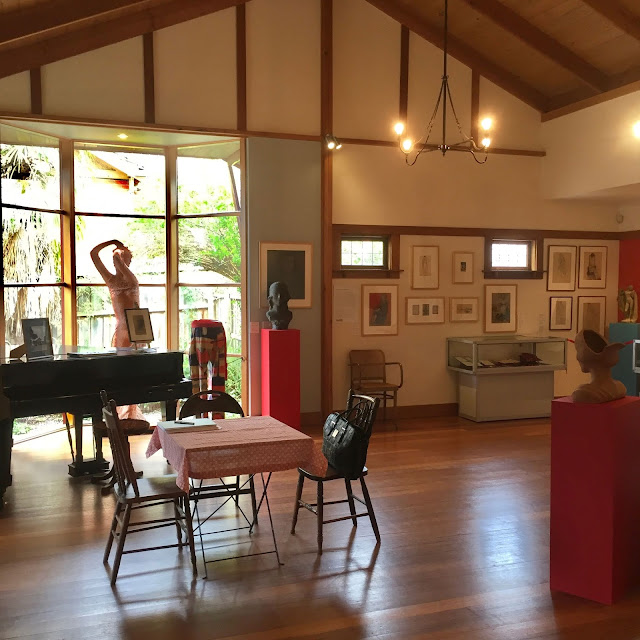 Ironically, there are many who won’t have heard of her, yet she’s touched the lives of most of us. Slawa is the inventor of the folding umbrella. 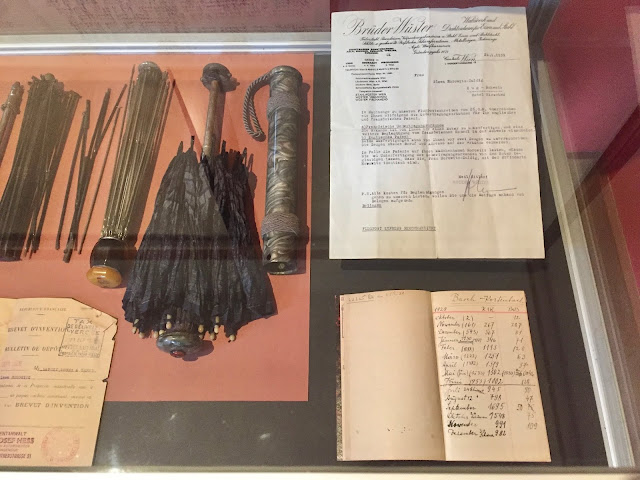 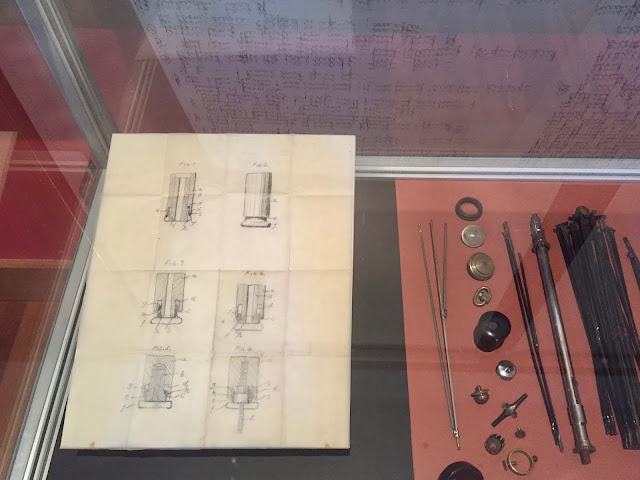 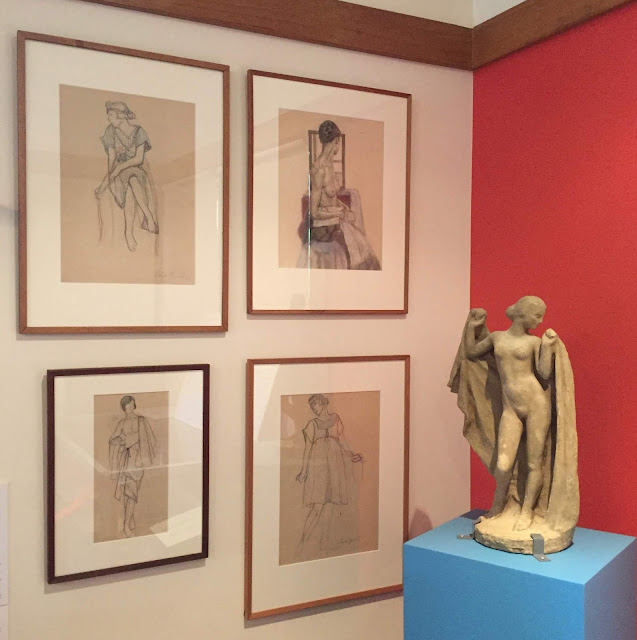 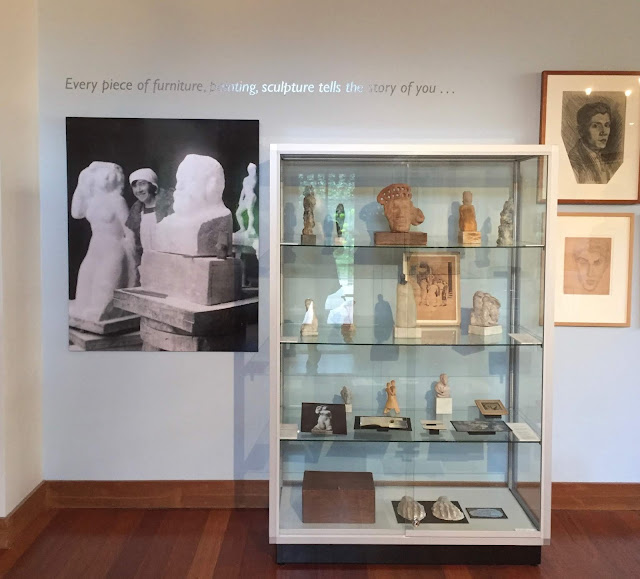 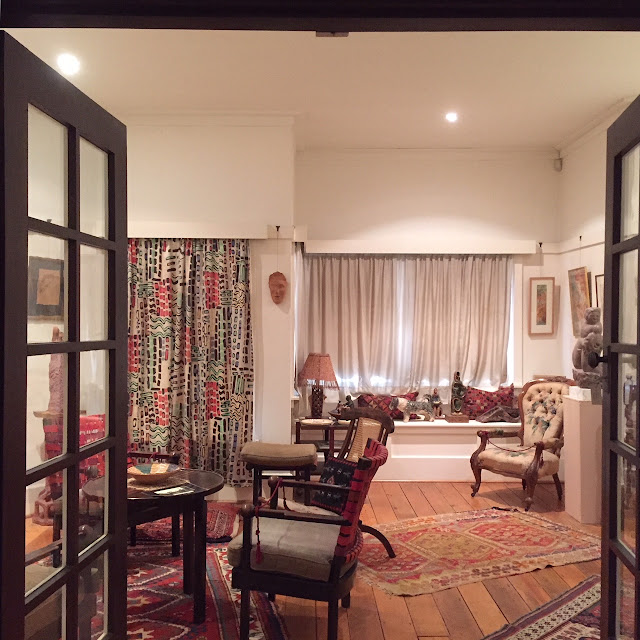 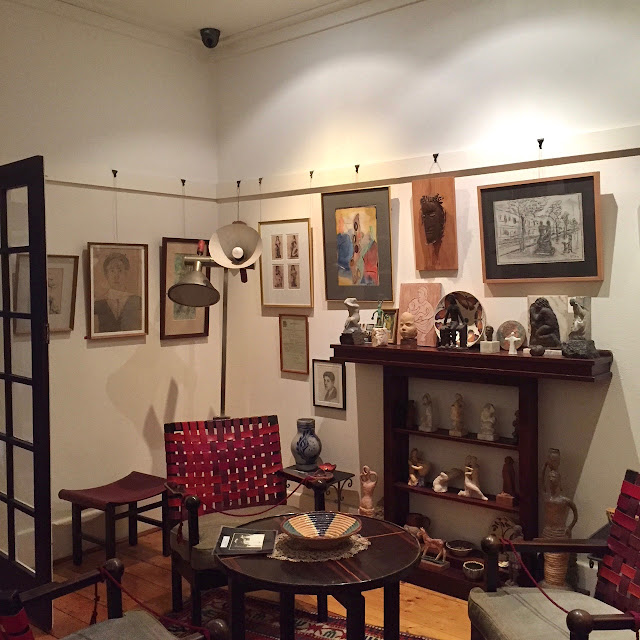 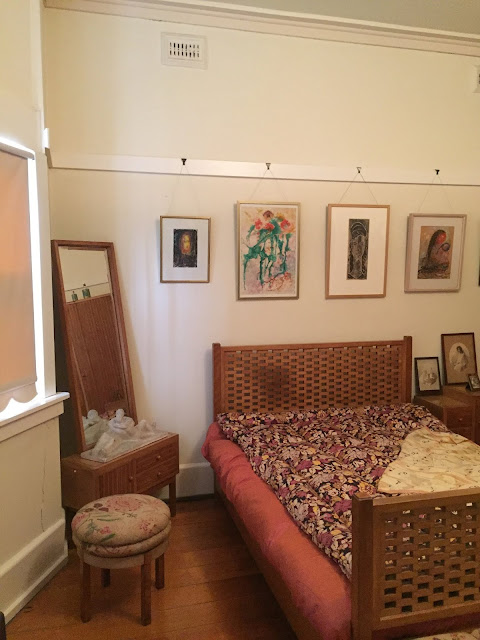 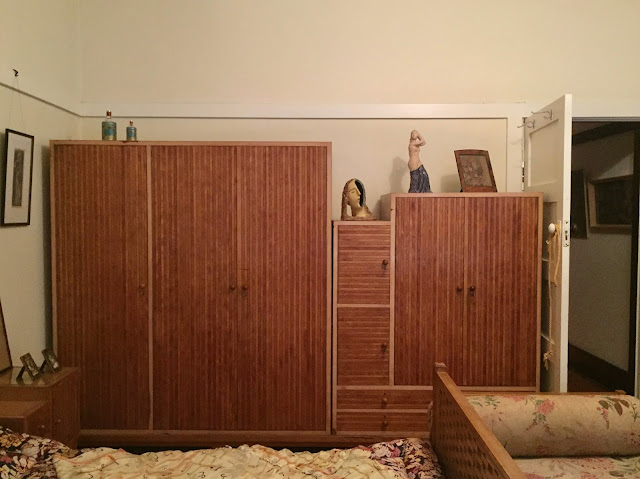 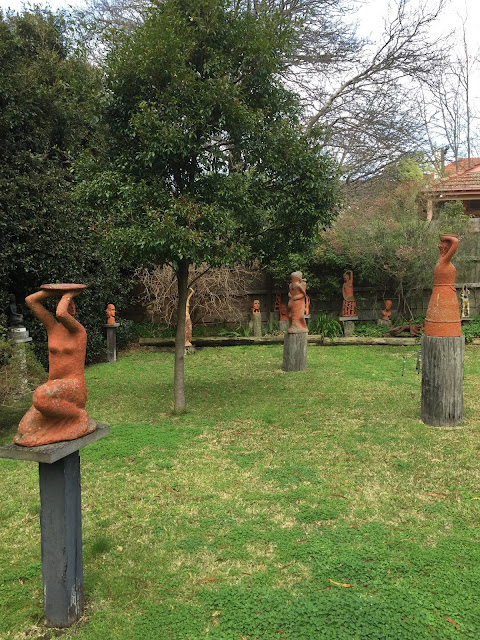 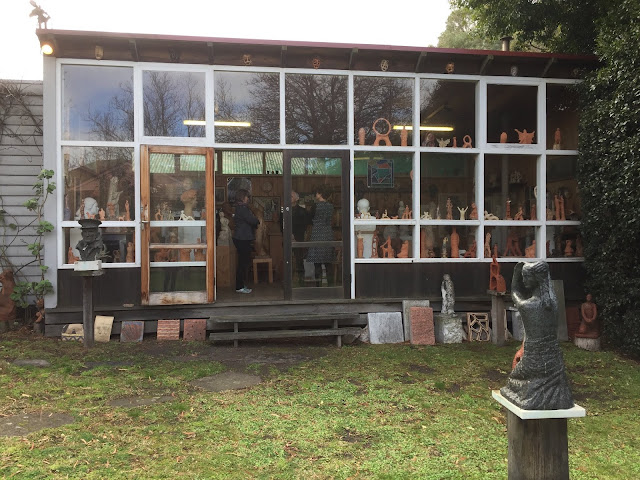 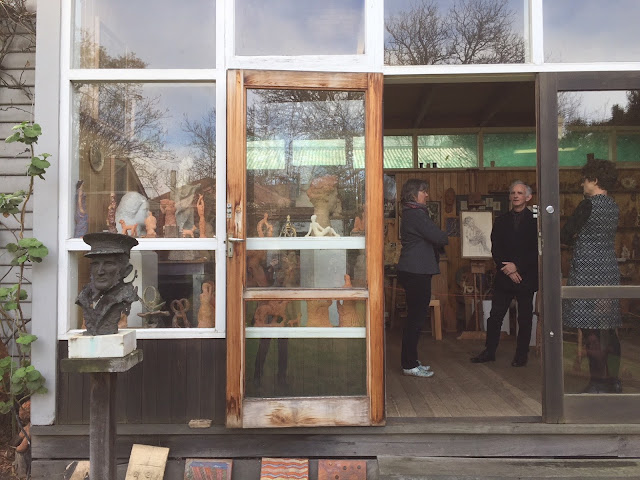 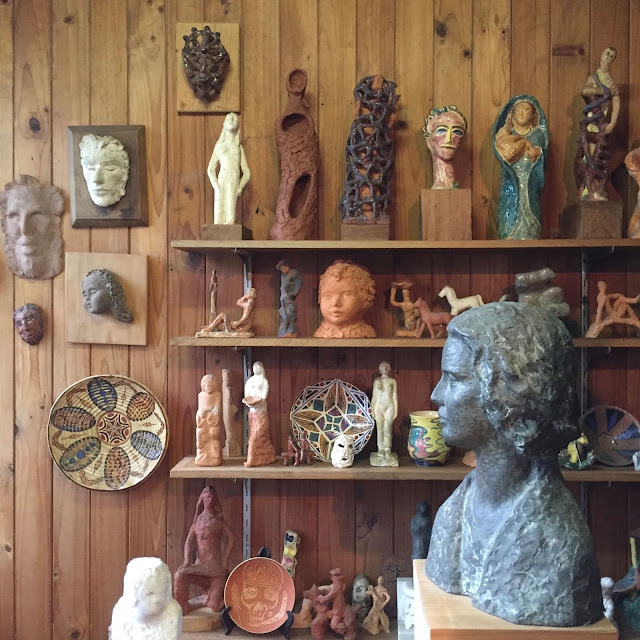 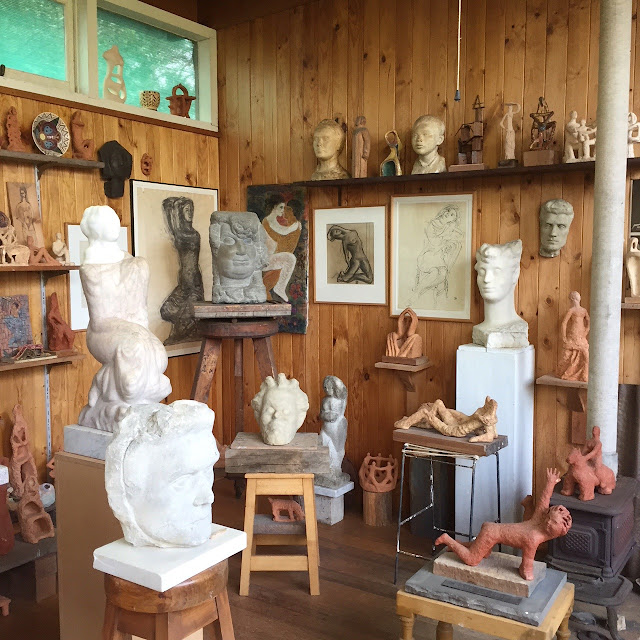 The finest house museums (and this is among them) are like self-portraits, offering rare insights into the lives, times and creative journeys of their former inhabitants, a journey that in this instance began in Poland and pre-WWll Vienna.

This Saturday, 25 August, from 2 - 4 pm I’m returning to Duldig Studio to speak about my own creative journey in the museum’s second series of Creative Women in Focus talks. I hope you can join me.

Even if you can’t make it on Saturday, a visit to Duldig Studio Museum and Sculpture Garden is highly recommended, particularly during the run of SLAWA: modernist art and design. It’s a timely testament to the achievements of an extraordinary woman. 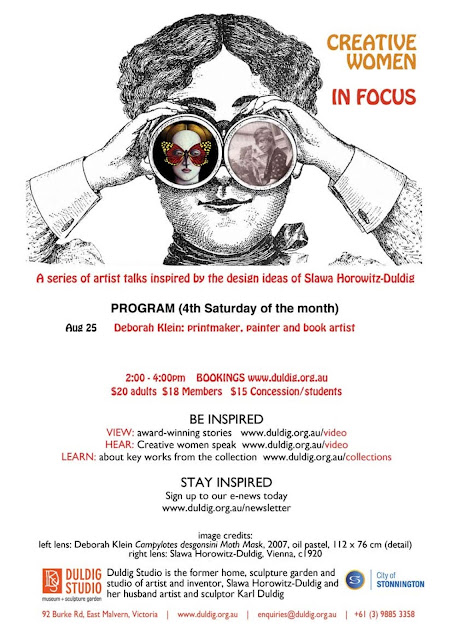 I'm a huge admirer of house museums - in fact, I'm currently exhibiting in one. For a considerable time, I've wanted to visit the Duldig Studio Museum in East Malvern. My wish is about to be granted. The museum has invited me to be the first speaker in its new series of Creative Women in Focus talks. Scroll down for full details.

Creative Women in Focus is Duldig Studio's new series of talks with Creative Women, Inspired by our current exhibition SLAWA modernist art + design, and our own creative woman – Slawa Horowitz-Duldig.

From printmakers to embroiderers, weavers to dressmakers this is an opportunity to hear some very creative women talk about their lives in art and design, their practices and the challenges and pleasures of the creative life.

Beginning in August, artist Deborah Klein will join us to discuss her career as a printmaker, painter and book artist.

As Deborah describes, ‘My visual language has evolved over the years and is multi-layered. Many works pay homage to women and their creative histories. The work is unified by its concern for women: the untold numbers who have been completely written out of history, the courage of those women and girls who must still fight seemingly unsurmountable odds to have their voices heard.’

ABOUT DULDIG STUDIO
Duldig Studio is the former home, sculpture garden and studio of artist and inventor, Slawa Horowitz-Duldig and her husband artist and sculptor Karl Duldig.
Posted by Deborah Klein at 7:37 AM

WALK-AND-TALK WITH THE BOWER ARTISTS


Directly following are details of the remaining walk-and-talk events with the Bower artists/collectors before our show PATTERNS OF COLLECTING/FROM THE BOWER AT THE JOHNSTON COLLECTION concludes its long run on 18 September. Some events are booked out, so do check the link below.

For further information about the above, or to book a house tour during the run of the show, go HERE:

Posted by Deborah Klein at 8:42 AM


Today is the first day of the Melbourne International Film Festival; between now and 19 August, I'll be seeing over 60 films. Just before I throw myself down the rabbit hole and into the Wonderland of MIFF 2018, here are some snapshots of last night’s floor talk, METAMORPHOSIS AND TRANSFORMATION, presented with Jazmina Cininas as part of MY MONSTER: The Human Animal Hybrid at RMIT Gallery. (Scroll down to see Jazmina and I with a selection of her astonishing Girlie Werewolf reduction linocuts).

Many thanks to exhibition curator Evelyn Tsitas, to RMIT Gallery for having us and to all who came along.

Posted by Deborah Klein at 8:48 AM