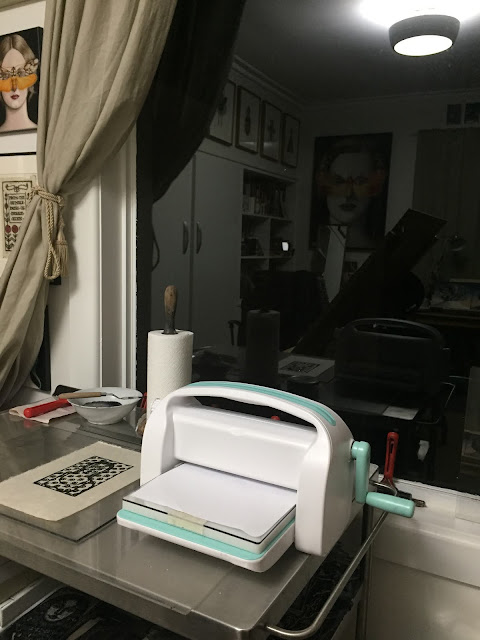 Back in May, during the first period of lockdown, I purchased the craft press shown here. Since then, I’ve been predominantly focused on painting and drawing and it’s only recently that I’ve had the chance to try it out.
Essentially the press is an embossing and die-cutting machine, but it can also be utilised for small scale relief, monotype and intaglio prints. Our two etching presses have been in storage since last year’s move, and due to insufficient studio space, they are likely to remain there for some time yet. Meanwhile, there’s a small project I’ve been keen to undertake, as well as an accumulation of previously carved lino blocks that I’ve never even proofed.
I first became aware of the existence of craft presses via the Instagram page of Margate-based linocut artist, Nick Morley, AKA Linocut Boy. Long haul visitors to this blog might remember that he featured some of my work in his book, Linocut for Artists & Designers (2016). When lockdown was first introduced in the UK, Nick reported on Instagram that he’d resorted to working at home in his attic with only the the most basic of materials and something called an X-Cut. I had no idea what this was and it piqued my curiosity. Some online searching revealed it to be what is regarded as the Rolls Royce of craft presses. Aside from its sleek good looks, the X-Cut has the benefit of a dial at the top that enables change of pressure, a feature that’s generally lacking in similar presses. Unfortunately, my searches also revealed the X-Cut to be by far the priciest of craft presses - considerably more so with the added cost of international shipping. As it turns out, they are also the hardest to come by, particularly in this part of the world. If you are fortunate enough to track down an X-Cut, however, I recommend Annie Day’s informative article, Making prints with an x cut XPRESS Craft Machine in Creative Printmaking Workshops on her website, Printmaking Sisters, HERE.
Further investigation led me to the Facebook page Craft Press Printmakers, which has close to five and a half thousand members. There I learned that most brands do a good job even without adjustable pressure - it’s simply a matter of experimentation with the amount of backing material used. Armed with the knowledge gleaned from there, I set out to order a press of my own. I was fortunate to find one on an Australian site, CraftOnline. It was very reasonably priced at $165.00, including shipping. (The price has since been further reduced). The press is designed for printing on up to A4-sized paper and even has a dial on the left side that enables adjustment of pressure. It’s an ideal size for small spaces like my current studio. Don’t be fooled by its kitschy brand name, Poppy Crafts, or its plastic construction and tizzy colour scheme. In my first efforts, printing initially from the old block pictured below, I’ve achieved infinitely more satisfying results and with far greater ease than with either of our etching presses.
Click on images for a clearer view. An update on the Poppy Crafts press will follow in the near future. 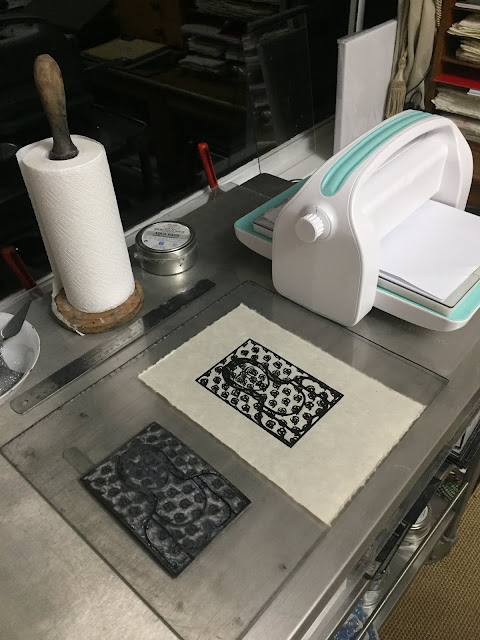 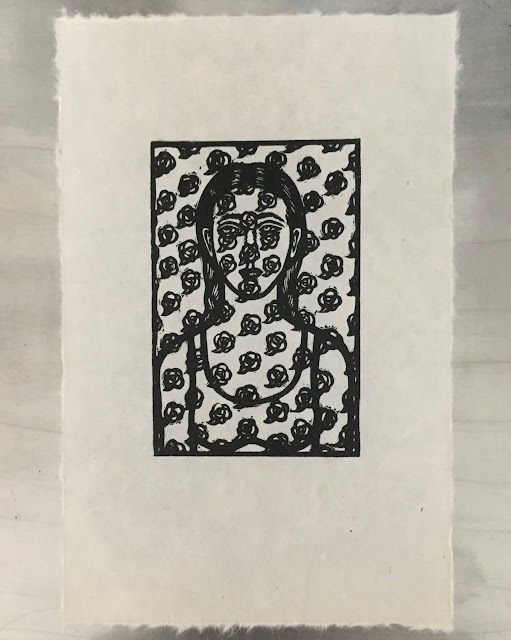