Through the eyes of film

For me, one of the highlights of every year (if not THE highlight) is the Melbourne International Film Festival. This year I’d planned to book myself into the same tiny, budget friendly, strategically located hotel that was my base for MIFF in 2019, the first year I no longer had a permanent base in Melbourne.

Then came the news I’d been dreading, but expecting: MIFF 2020 was cancelled due to COVID-19.

Orson Welles once described film as a ribbon of dreams. Indeed, film has long threaded its dreamlike way through just about every aspect of my life, including my imagery. Perhaps that's why, despite the postponement of several major projects that were set in place for 2020 (two solo shows, a residency and the George Collie APW Award exhibition) the cancellation of MIFF 2020 was the blow that fell the heaviest.

Later, a scaled-down online version of the film festival, MIFF 68 1/2, was announced. To me it seemed like the complete antithesis of everything that makes MIFF in particular, and cinema going in general, special. Films are made to be seen in cinemas with all the attendant highs and lows that come with the territory. We own a projector paired with a BluRay player, but not the attachments necessary for streaming, so I would be reduced to watching films on my laptop. In support of MIFF, I renewed my membership but had absolutely no desire to participate in MIFF 68 1/2.

It was a recent phone conversation with Anne Virgo, Director of the Australian Print Workshop, that changed my mind. Anne had called to discuss the George Collie APW Award exhibition, which it seems will go ahead at some point, in some form or another that's yet to be determined. (More about this in my next post). In our initial conversations about the show earlier this year, Anne had insisted on scheduling it around my MIFF dates, a gesture that was kind, flexible and empathetic beyond the call of duty. When I remarked on the irony of this, and the poor substitute I perceived MIFF 68 1/2 to be, Anne flatly pointed out that this is simply how things are now and I decided it was time to get real.

The film festival was already a few days under way when I jumped on board, but I'm so glad I did. MIFF 2020 enabled me to travel the world while remaining safe at home. It was a wild and wondrous ride, and I enjoyed every minute of it. Even the couple of films I liked the least left their mark because they took me somewhere I'd never otherwise have been. In recent MIFFs, I've seen well over fifty films. This year, partly due to my tardiness, I saw only 16 feature length films, together with numerous short subjects. To be fair, however, one of the feature films was Mark Cousins's 14 hour documentary, Women Make Film - A New Road Movie Through Cinema, which was presented in five parts. Parts 1- 4 each ran for around 3 hours, with the 5th part clocking in at a more civilised two hours. Moreover, another film, Lara, had such an emotional impact on me, I saw it twice.


Throughout MIFF 68 1/2, buoyed by the remarkable and revelatory Women Make Film, I cast an occasional backwards glance at some of my works that have drawn their inspiration from women in film, more specifically Film Noir and in some instances, the Melodrama, aka The Woman's Picture.

Several of the Film Noir-related works hang in our upstairs cinema room and small downstairs office.


One of many extraordinary women film makers highlighted in the Mark Cousins documentary is Ida Lupino. I've seen a number of her films as director, including The Hitch Hiker and The Bigamist (both 1953) but was unfamiliar with Outrage (1950) one of her films prominently featured in the documentary. The excerpts from this film, the story of a rape and its aftermath, made for powerful viewing. I've actually managed to track it down on YouTube, pending securing a copy of my own. Directly below is a still from Outrage. I include it here because of the uncanny similarities it shares with my linocut that directly follows it, Woman at the Door, a work that was made without any prior knowledge of Lupino's film. 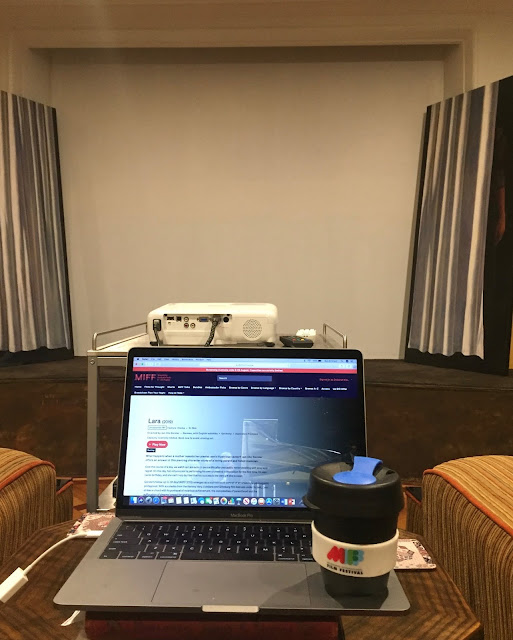 The feature films that made up my personal MIFF 68 1/2 are listed below:

Some Kind of Heaven (2020)
Directed by Lance Oppenheim • USA

Posted by Deborah Klein at 3:42 PM