Mildred Pierce in the Art Gallery of New South Wales

As I continue grappling with fledgling imagery in the studio, a work from the increasingly distant past has reappeared: 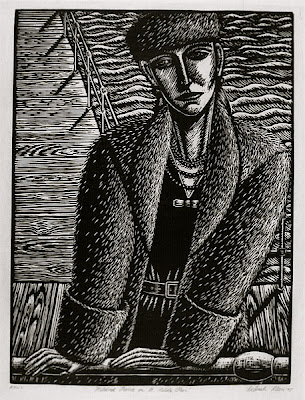 
Only recently I learned that Mildred Pierce on St. Kilda Pier, a key work from the Film Noir linocuts of the mid 1990s, has been in the permanent collection of the Art Gallery of New South Wales since 2009.
Its primary inspiration was the film Mildred Pierce (1945, directed by Michael Curtiz) which in turn was based on the novel by James M. Cain. The setting has been transposed from its original locale of Glendale in Southern California to my home town of St. Kilda, where I was living when I worked on the series.

Mildred Pierce on St. Kilda Pier is also in the permanent collections of the National Gallery of Australia, Deakin University and the Art Gallery of Ballarat. It was included in the 2008 touring Survey Exhibition Deborah Klein - Out of the Past 1995-2007 which was curated by Diane Soumilas.

Posted by Deborah Klein at 8:58 AM