Looking back to see... 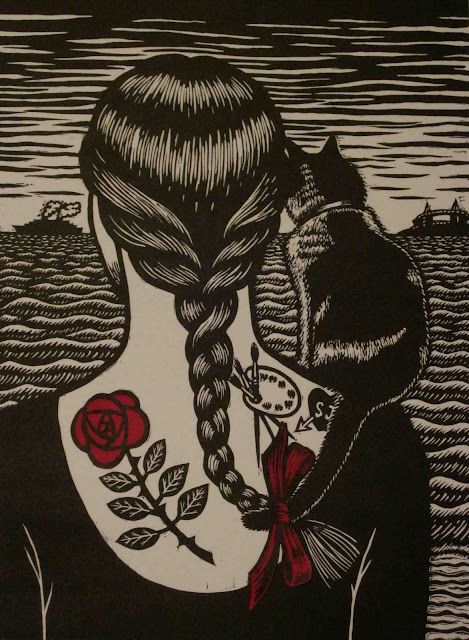 
Here is a preview of my most recent print, made especially for Familiar/Unfamiliar, curated by Rona Green. The project was initiated by the Print Council of Australia to celebrate its 45th anniversary. The exhibition, comprising 45 printmakers, will be held in conjunction with IMPACT 7, the International Printmaking conference to be hosted by Monash University in late September.

Looking back to see… is a personal response to Familiar/Unfamilar's central brief, namely to explore perspectives on people and place. It is essentially about looking back across time from one place with which I was once familiar towards another to which I was equally, if not more, attached, namely the St. Kilda of my childhood and adolescence, and London, where I lived for several years in the 1970s. Many people look upon the 70s with disdain, but that time in London was seminal for me both personally and as a fledgling artist. As we know, familiarity can also breed contempt; by comparison, my feelings towards St. Kilda are more ambivalent. But both places profoundly affected my life and work.

I first crossed paths with the black and white cat and during my first year in London. It was a blessed, predestined alliance that would last many years - for the rest of her life, in fact. She is another kind of familiar, usually associated with witches. In the 1980s Mimi came to live in Australia with me, initially in St. Kilda. She is both a vital link between the two cities and the first and best loved of all the memorable cats that have shared my life.

Most of the drawing for Looking back to see… was developed in June 2011, during a residency at the Art Vault in Mildura. Being geographically removed and in neutral territory gave me a clearer perspective on the recollections that led me to this point in time. 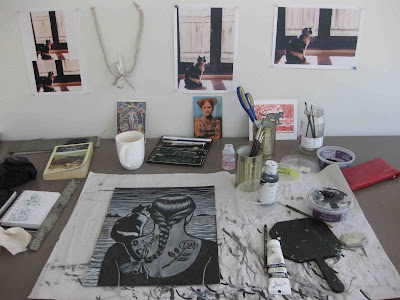 Work in progress at the Art Vault and some reference material, June 2011

As I mined my memories, I was also incited to revisit past imagery, iconography and printmaking techniques. This is the first work for many years to incorporate a background. Mimi appeared in several of my linocuts of the 1980s, including some of the first I ever made. The steamer and the Westgate Bridge on the horizon line, both personal symbols of escape, were appropriated from my linocut St. Kilda Warrior (1996). The Westgate Bridge also appeared in an earlier linocut Sometimes Jenny Took Long and Lonely Walks Along the Long and Lonely Beach (1987.) The arts and crafts movement-inspired rose is another emblem that has featured many times in my work. It is incorporated here, also not for the first time, in the form of a tattoo. (An early example is Rose Tattoos, 1995.) The rich crimson of the rose and hair ribbon were applied via chine colle, a collage-based technique that I haven’t used in many years. 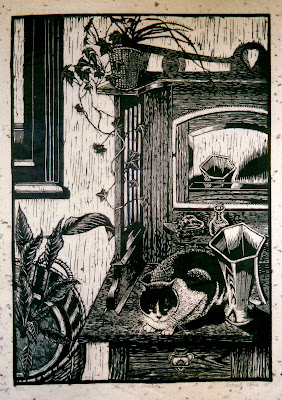 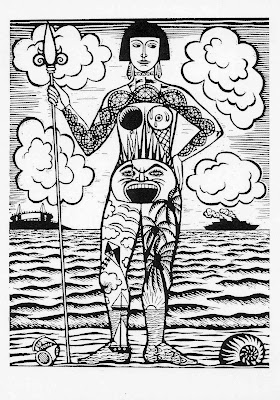 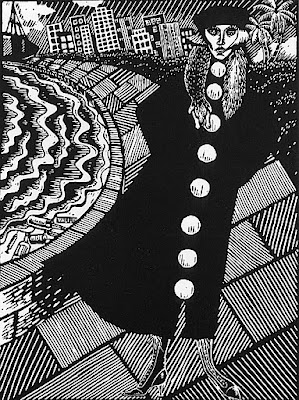 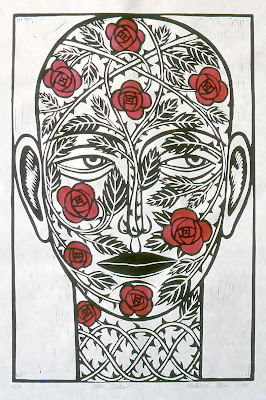 
Ironically, given that I am based in Australia, I tend to revisit London more often than I do St Kilda. Not surprisingly, both places contain elements of the familiar and unfamiliar. Like all cities they are only impervious to change when carefully preserved in our memories.

Pictured below are selected stages in the development of Looking back to see... 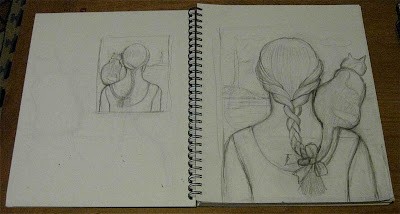 Two of many developmental sketches 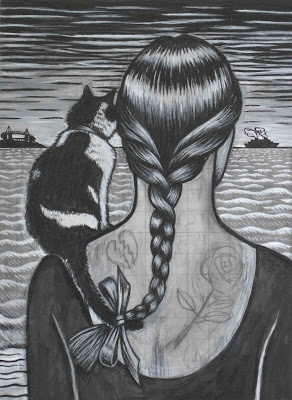 Lino block in progress, with tattoos still to be resolved 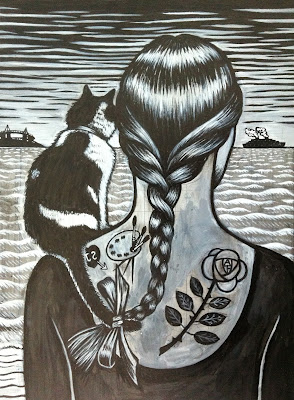 Final stage of drawing on lino block ready for cutting 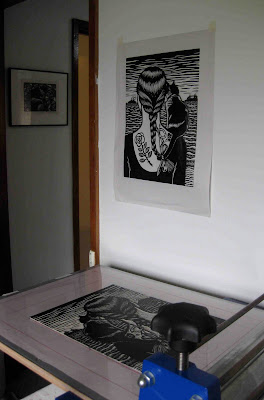 Proofing at Ballarat. It was only at this stage
that I noticed the picture directly outside,
an early portrait of Mimi (see below) 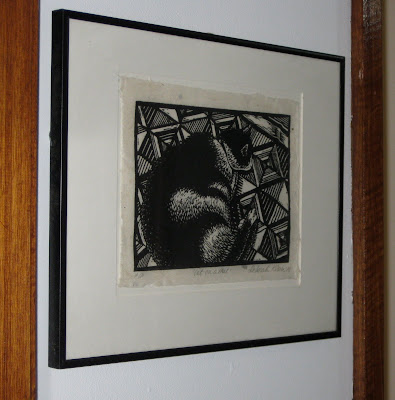 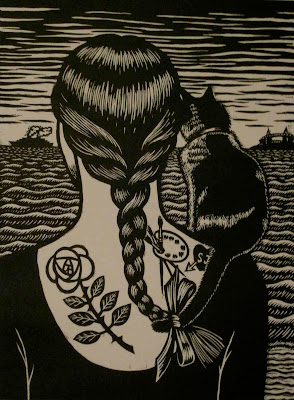 Bon a tirer without chine colle

Familiar/Unfamiliar will be exhibited from 28 September - 16 October at

It will tour to Tweed River Regional Art Gallery, NSW from 11 May - 24 June, 2012 and Swan Hill Regional Gallery in 2013 - dates to be confirmed. I will post full details, including a list of exhibiting artists, nearer the time of the exhibition's launch in September.
Posted by Deborah Klein at 7:47 AM