In a continuation of my previous post, I once more don my Winsor and Newton Global Ambassador hat to document my latest efforts with the Winsor and Newton Pigment Markers. Working on this series of drawings has been such a pleasure. I've found the markers to be extraordinarily versatile, particularly in the way I've been able to build transparent layers. In this respect, the White Blender and Colourless Blender markers are invaluable, enabling the creation of virtually limitless colours and tones.

As a drawing tool that combines the linear with the painterly, the markers are a perfect fit for my imagery. At this stage, I still feel I've barely scratched the surface in terms of what they can bring to my work, but already foresee them becoming a permanent part of it.

The Winsor and Newton Pigment Markers will be available in Australia from around the middle of this month. I can't recommend them highly enough.

In the final drawings of the eight-part series directly below, four fabulous women from the glorious age of black and white movies are reinvented as Moth Women Vigilantes. 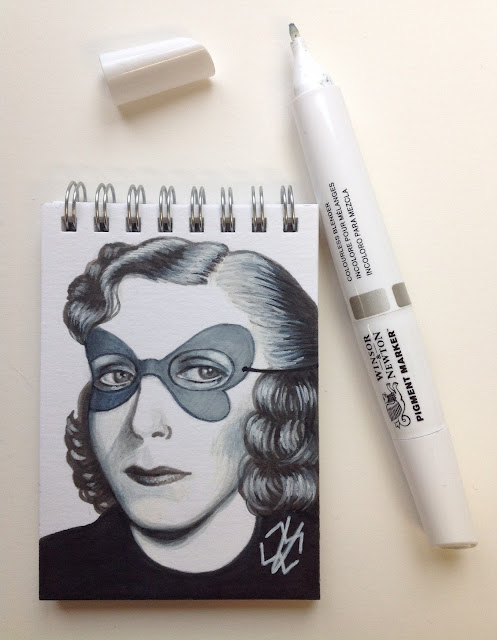 I was first introduced to the work of actor and comedienne Gracie Allen, one half of the beloved husband and wife comedy team of Burns and Allen, when I was in high school in the 1960s. In those distant days, reruns of their TV show were screened weekdays on afternoon television, and if I ran home from school very, very fast, I could just about catch an entire episode. Prior to their long-running TV series, George Burns and Gracie Allen appeared in vaudeville, featured in numerous films and had their own hugely popular radio program. In its best-known running gag, Gracie even ran for US president in 1940, as leader of the Surprise Party. The Moth Women Vigilantes are not alone in believing the US could do a lot worse.

Gracie Allen was a highly intelligent woman, the polar opposite of her screen persona. Even when she was playing dumb, a skewed kind of wisdom was frequently imbedded in what the equally brilliant George Burns termed her ‘illogical logic’.

The Moth Women Vigilantes are proud to number Gracie Allen among their latest recruits, an occasion commemorated in this Winsor and Newton Pigment Marker drawing 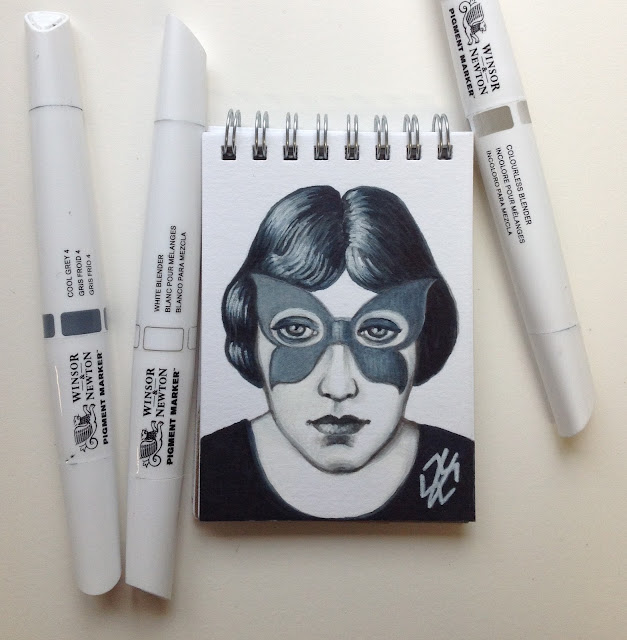 A seasoned stage actress, Frederick was a late starter to silent movies at age 30. The medium well suited her; she was also one of the first actors to venture into talking pictures.

Throughout her career she was known for her portrayals of strong, authoritative women. She never shrunk at playing unsympathetic roles that other actors feared would damage their images and careers. In this respect, Bette Davis was later compared to her.

In 1920 Frederick appeared in the title role of Madame X, the story of a woman on trial for murder, who conceals her identity in order to protect her family’s reputation. She would forever be associated with the part.

By the time sound film was established, Pauline Frederick had graduated to matriarchal roles, often in a supporting capacity. In This Modern Age (1931) she played a young Joan Crawford’s mother. The resemblance between the two was frequently remarked upon, with many feeling that the symbolic acting torch was being passed to the next generation. Certainly the influence of Frederick is apparent in Crawford’s subsequent work, and even her choice of roles during the 1930s and 40s.

Frederick was an actor’s actor, a pioneer of early cinema, and a role model for the female stars who would follow her during Hollywood’s Golden Years.

Almost forgotten until recently, Pauline Frederick’s initiation into the Moth Women Vigilantes Hall of Infamy has earned her a permanent place in the spotlight 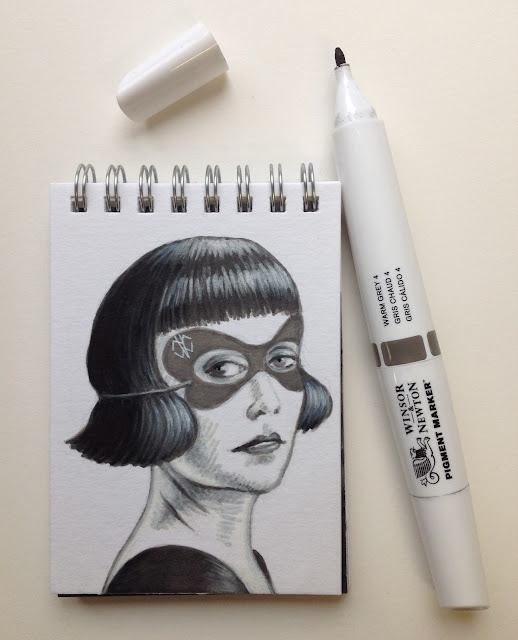 Until I visited the Berlin Museum of Film and Television in 2012, I had only the seen work of actor, writer and painter Asta Neilsen once before, in G. W. Pabst's Joyless Street (1925). Her co-star in the film is a young Greta Garbo, then on the cusp of international screen stardom. In her day Neilsen was equally renowned, and a considerable influence on Garbo, who declared that Neilsen taught her everything she knew.

The clips of Neilsen at the Berlin museum indicate an actress of astonishing range. The museum cites her as the first international female movie star. Her most significant contribution to film, however, was the naturalism she brought to screen acting. (In the early days of cinema many actors were recruited from the stage, and their delivery tended towards the overly theatrical).

A solid theatrical background ensured Neilsen would have no technical issues with the advent of talking pictures. The talkies never appealed to her, however, and she transferred her talents to writing and painting. In 1937, after the rise of Nazism, Asta Neilsen was forced to return to her native Denmark.

Following my return to Australia, I made it my business to track down as much of her work as possible. From the Munich Filmmuseum I ordered several DVDs, including The Militant Suffragette (1913) and her singular version of Hamlet (1921) in which she plays the title role, not by playing a man (as actresses including Eleonora Duse had previously done on stage) but by playing a woman disguised as a man. 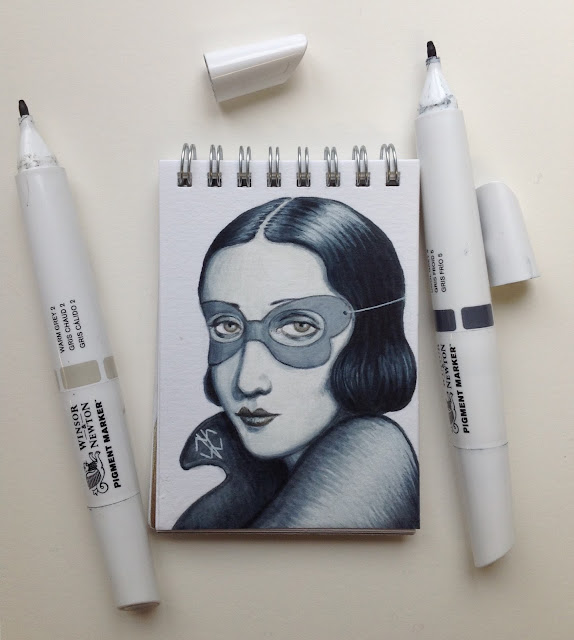 Del Rio was the first Mexican actress to gain acceptance in mainstream American films. Her film career began in the silent era and includes several masterpieces, including Raoul Walsh's superb What Price Glory? (1926). However, many of her roles reflected Hollywood's clichéd views of ethnic minorities. Other films merely showcased her luminous beauty, but gave little indication of her considerable range as an actress.

Del Rio's voice recorded well and Hollywood deemed that her accent would not be an impediment to a successful career in talking pictures. Among her successes were Bird of Paradise (1932) and Girl of the Rio (1932). In Flying Down to Rio (1933), she was overshadowed by Fred Astaire and Ginger Rogers in their first on-screen pairing (although, to be fair, who wouldn't be?) She faired rather better in her final American leading role in Journey into Fear (1942), which also featured her then-partner, Orson Welles in a script he wrote with co-star Joseph Cotten.

It was only after Del Rio's return to Mexico, in what is regarded as its golden age, that she was able to undertake roles that matched her ability. Her Mexican films include Wild Flower (1943) Maria Candelaria (1943) Las Abandonadas (1944) and The Unloved Woman (1949). She was awarded her country's equivalent of an Oscar four times, and was also proclaimed 'first lady of Mexican theatre'.

She occasionally returned to Hollywood to take on strong supporting roles based at last on her acting ability. Her later US films include John Ford's The Fugitive (1947) and his Cheyenne Autumn (1964).

Despite the belated accolades awarded her by her former adopted country, including the San Francisco Film Critics Award (1981) and the George Eastman Award (1982) Del Rio retained her base in Mexico. Her final film was The Children of Sanchez (1978).

Dolores Del Rio's achievements, barely touched on here, have earned her a rightful place in the Moth Women Vigilantes Hall of Infamy.
Posted by Deborah Klein at 10:26 AM