The suite of linocuts based on sideshow identities is an ongoing labour of love, with no end as yet in sight, mainly because I'm constantly juggling it with other projects. But encouraged by some positive response to the first Sideshows and Funfairs feature (see Blog Post February 11) I’ve decided to preview another work in progress from the series.

Step right up, folks, and meet The Spider Woman: 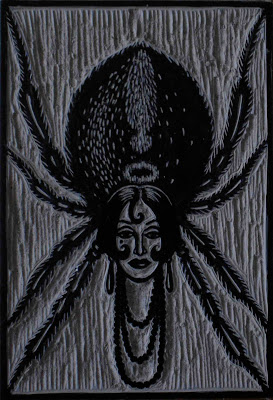 The Spider Woman, 2012, lino block
The Spider Girl has long been a permanent sideshow fixture, eventually becoming better known as ‘Spidora’. By 1917 several greedy showmen were offering to disclose the secret of the illusion for an extra 25 cents, despite a letter of complaint to Billboard magazine from showman James A. ‘Fingers’ Wallace demanding that the practice be stopped.
Yet Spidora flourished and continues as a sideshow attraction to this day. At New York’s Coney Island her background was revealed by the Barker: “Step right up folks, meet ‘Spidora’, the Spider Girl. Born with the head and face of a beautiful girl and the body of an ugly spider, she survives in total misery, for no man could love her.” The Barker explained that she lived off her earnings as a sideshow freak, that she ate flies and other insects. But the Spider Girl illusion frequently backfired when even some of the most gullible spectators recognized the same girl’s head atop other exotic creatures, such as The Human Butterfly and The Snake Girl.

The Spider Girl is living testament that human beings love to be fooled - even when confronted with one of the most obvious illusions of all time.
Unlike the unhappy Spidora, however, the Red Back Spider/Woman hybrid depicted above is no fake and is definitely not to be crossed. She has more in common with the non-arachnid arch villain as portrayed by Gale Sondergaard (one of my favourite actresses) in the Sherlock Holmes movie Spider Woman, 1944, dir. Roy William Neill, whom Holmes acknowledges is as cunning as Moriarty and as venomous as a spider. So popular was Sondergaard’s portrayal, it spawned a non-Sherlock Holmes ‘sequel,’ the horror movie The Spider Woman Strikes Back.
Yes, folks, feast your eyes on the Spider Woman - but beware she doesn’t feast on you.


For your further edification, here is a short visual history of the Spider Girl Sisterhood (although The Crying Spider by Odilon Redon (second from top) is of somewhat indeterminate gender). 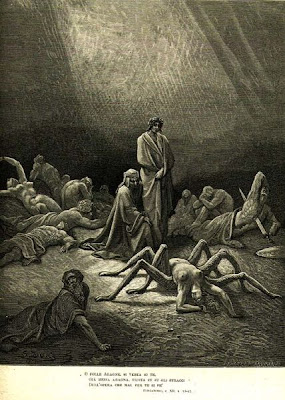 Arachne in Hell by Gustave Dore, engraving
(from 1861 edition of Dante's Inferno) 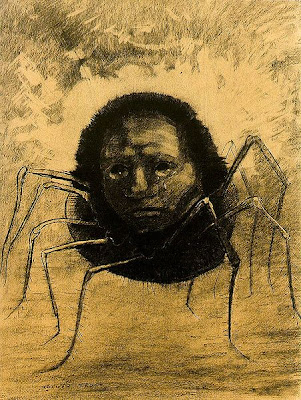 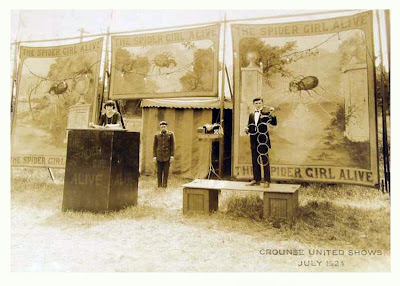 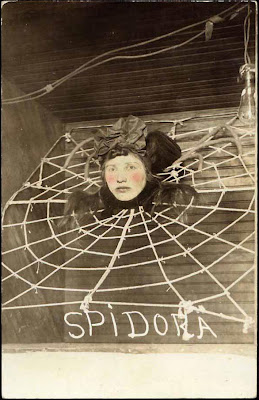 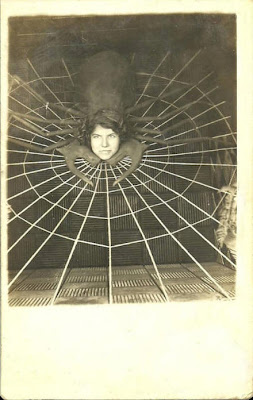 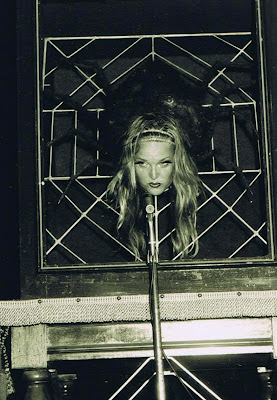 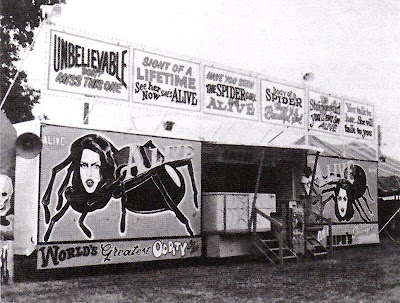 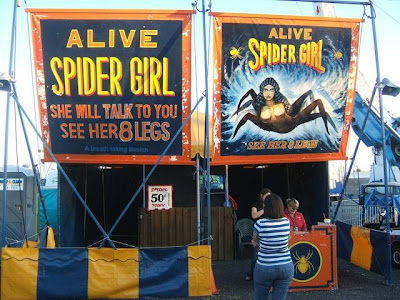 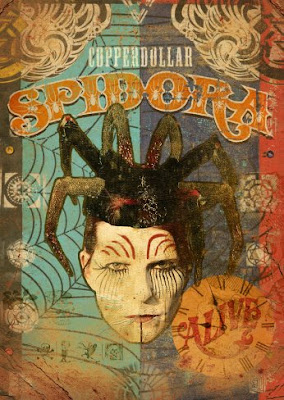