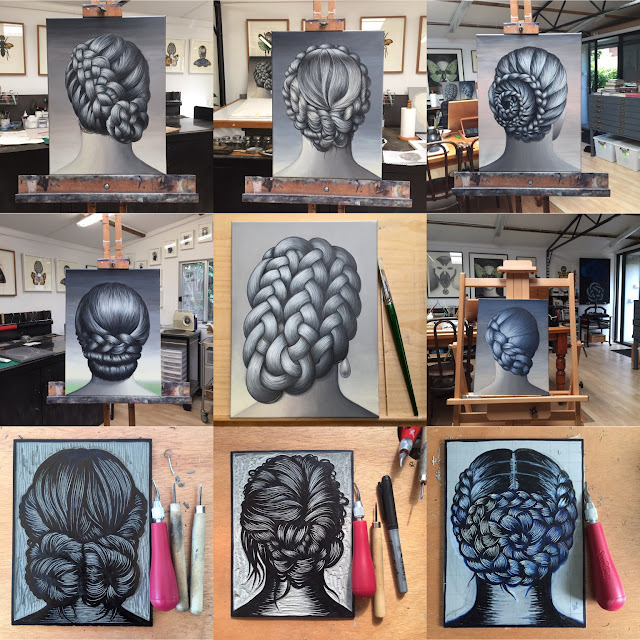 There are several #bestnine apps designed for Instagram wherein your most popular nine posts for the year are gathered together and displayed in grid form. I decided to give it a try, and, as this is the last day of the year, thought I’d share the results here.

My nine for 2018 were not chosen by a robot, however, but by me. Whether these are actually my best nine is subjective, but they’re fairly indicative of where the work is right now and where it’s potentially heading from here.


Prelude, pictured above, is part of a growing body of work, collectively titled Back Story. This and Lookout, also featured in this post, were started back in April, and were the first and second paintings undertaken for the new series. In this year's avalanche of activities, however, I never got around to posting them here, and have barely managed to squeeze them in now, just as 2018 is nearing its end.

Prelude was also the basis for the eponymous linocut I created for IMPRESSIONS 2018, the Australian Print Workshop's biennial fundraiser, and Lookout appears on my 2018 Christmas card.

The painting component of Back Story was placed on hold when I undertook a term as Artist-in Residence at Melbourne Athenaeum Library as part of Melbourne Rare Book Week in July. During the residency I worked on several projects, including a suite of linocuts inspired by the women in Mary Shelley's novel Frankenstein, and continued to develop them after the residency had ended. These too are part of Back Story.

Now that carving of the linocuts is near completion, my energies are predominantly concentrated on the paintings that are the backbone of Back Story. A series of 20 is initially planned, each measuring 40.5 x 30.5 cm. These will be the forerunners of larger works.

Directly below are selected progress views of Prelude. (Note the transition from warm to cool greys). 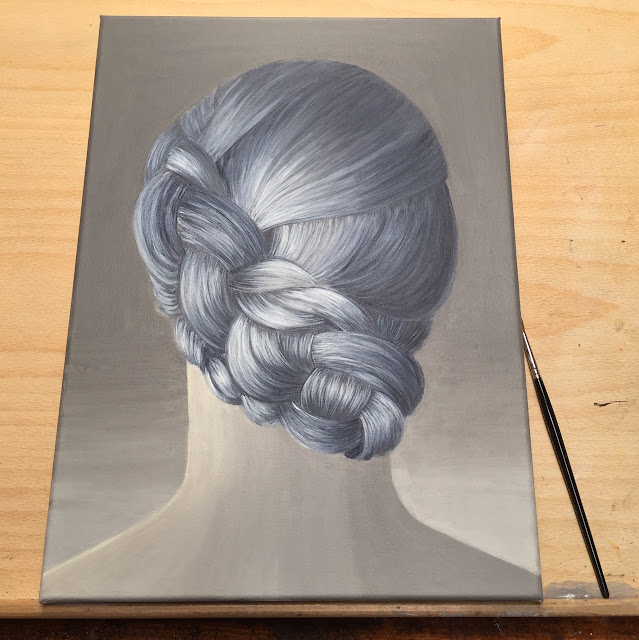 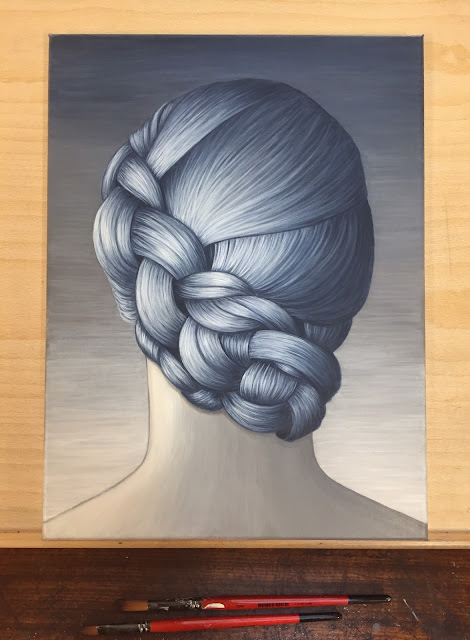 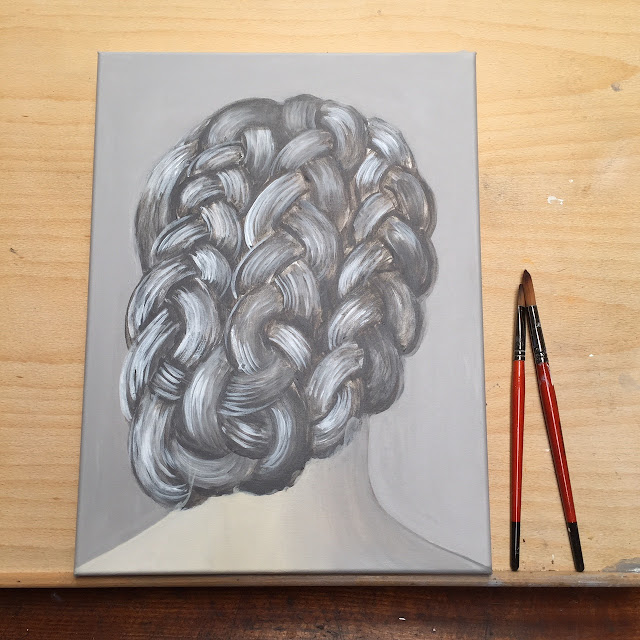 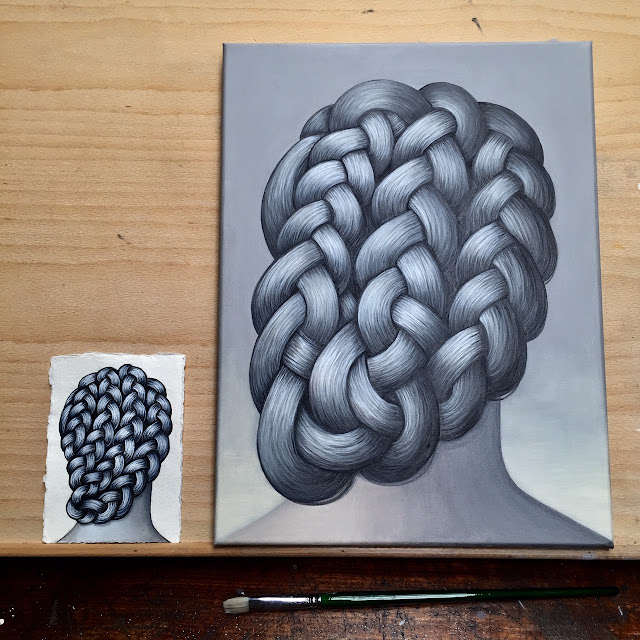 
A recent work, near completion, followed by a series of progress views. 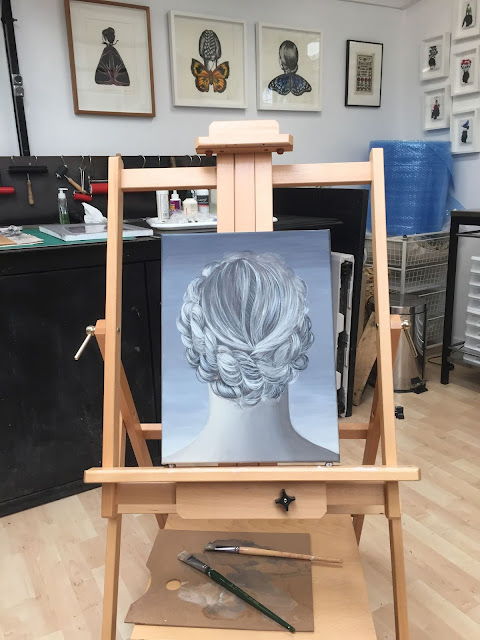 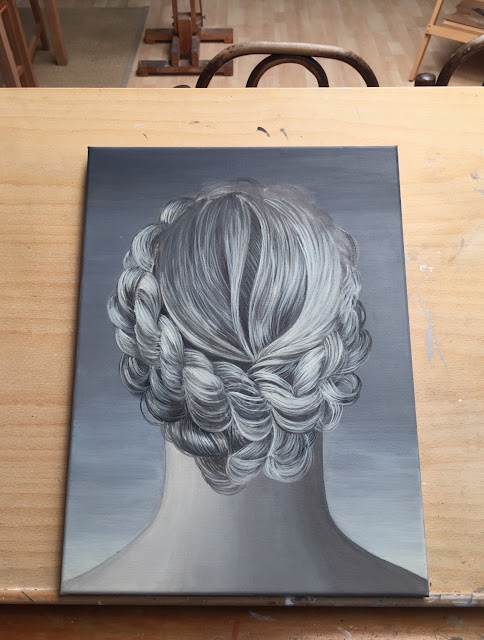 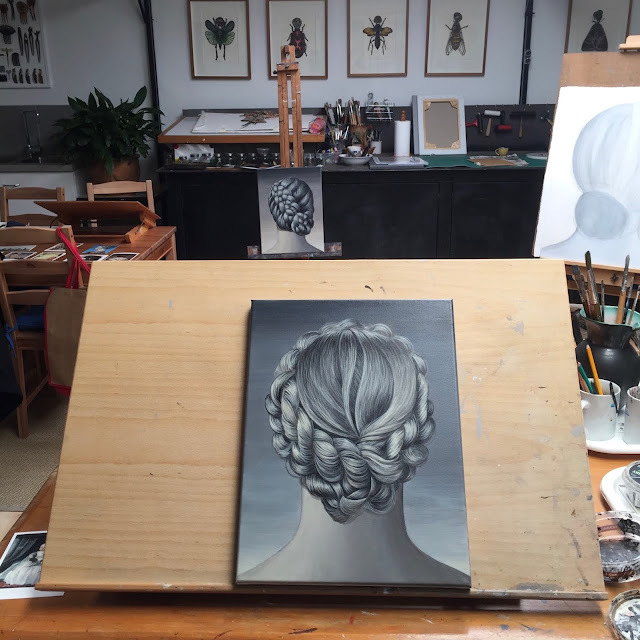 In the background (above centre) is Sybil, another work in this ongoing series. For a closer look at Sybil, go HERE.
Posted by Deborah Klein at 8:51 AM

Compliments of the Season 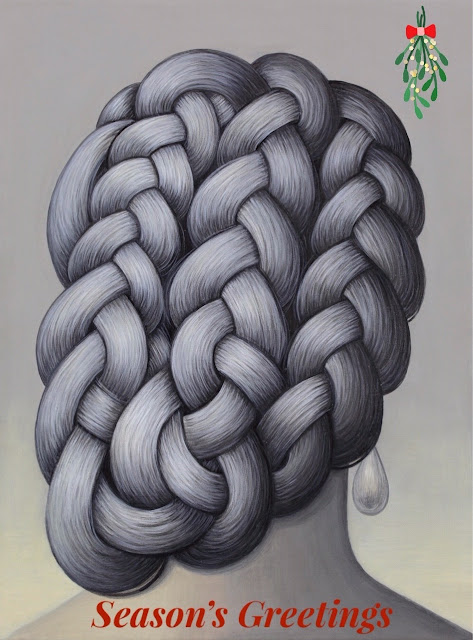 On the night before Christmas, all is calm, all is bright. Not a creature is stirring, not even in my studio. 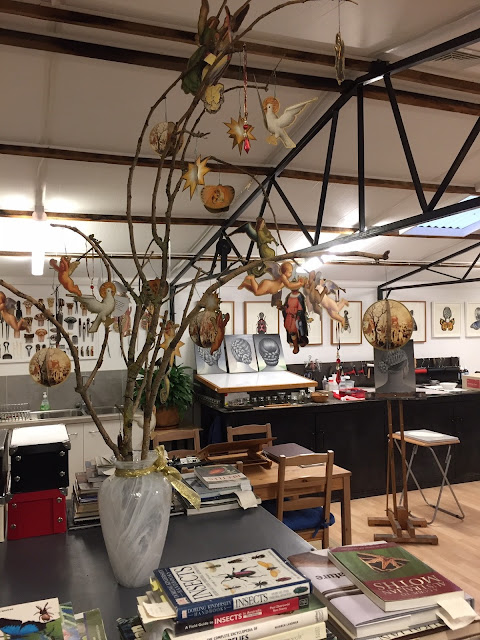 Entering into the Yuletide spirit, Alice has decided not to fell the Christmas tree after all. 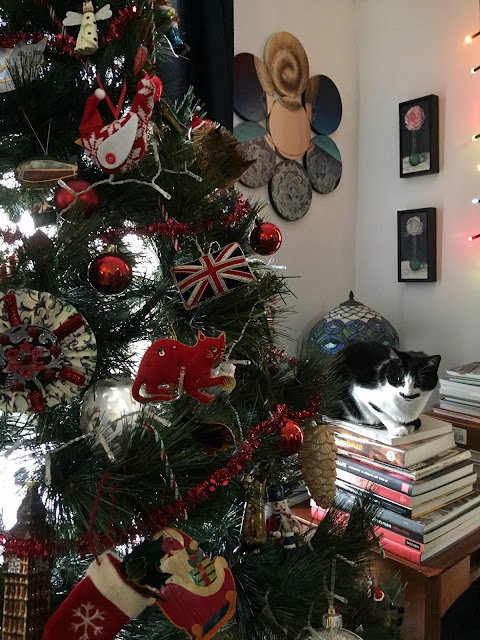 Wishing you all a very Merry Christmas and nothing but the best for the coming year. 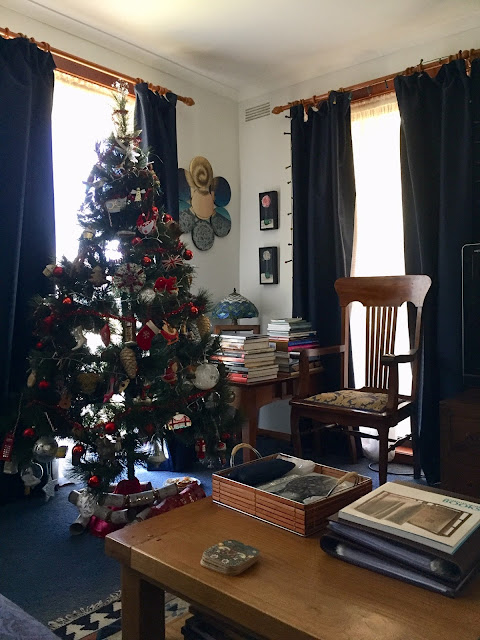 Posted by Deborah Klein at 6:24 PM 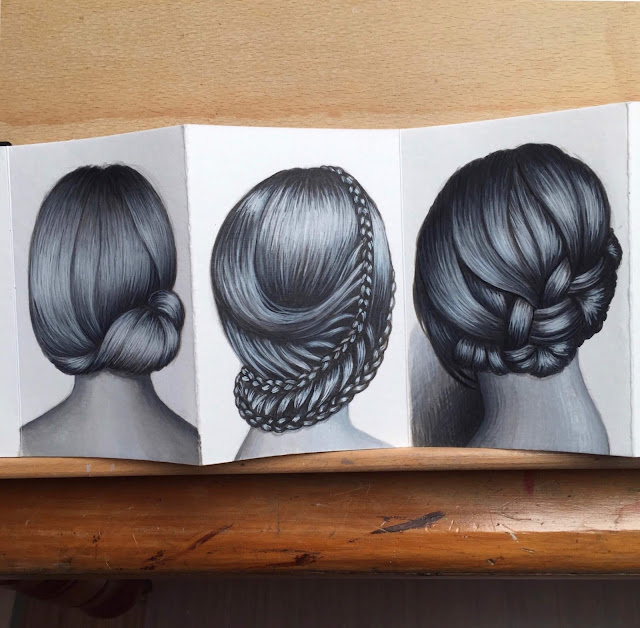 Pictured top: pages from a recent sketchbook with ideas for future works mapped out. The centre drawing is the basis for one of the paintings I’m working on at present. 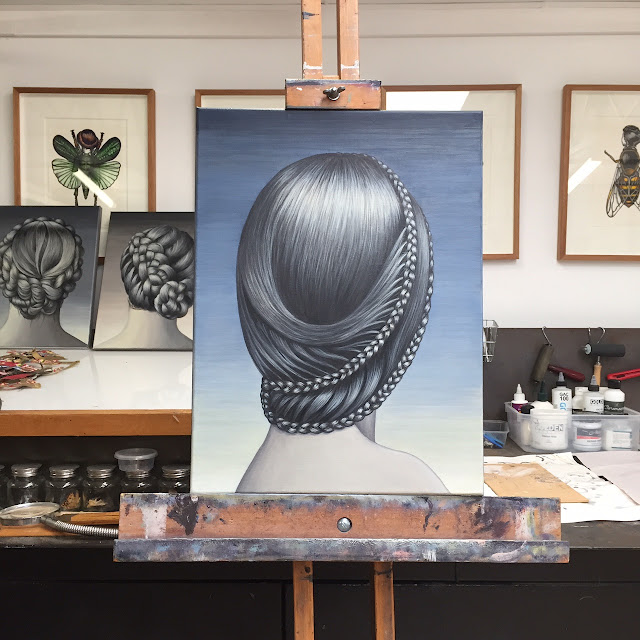 Meanwhile, the sketchbook is currently part of DRAWING STRENGTH, a visionary show curated by Jo Lane that celebrates the art of drawing in its myriad shapes and forms.

Now in its final weeks, DRAWING STRENGTH can be seen at the Barn Gallery, Montsalvat until January 6, 2019. Afterwards, a stroll around Montsalvat’s magnificent grounds is also highly recommended, especially if you’re seeking respite from the Silly Season that’s currently upon us.
Posted by Deborah Klein at 3:15 PM


With so much happening in recent weeks, I've been somewhat remiss about posting updates from my own studio.

Pictured top is Sybil, one of several works currently in development for an expansive project with the umbrella title Back Story.

The initial studies for Back Story were created in 2017, many of them during a residency at The Art Vault. The subsequent intrusion of other projects, however, made it virtually impossible to develop the imagery with any real consistency. The series, which will comprise paintings, prints, drawings and artist books, is now well and truly underway and will be my primary focus for the foreseeable future.

The following photos, snapped in my Ballarat studio, show Sybil in key stages of its development. 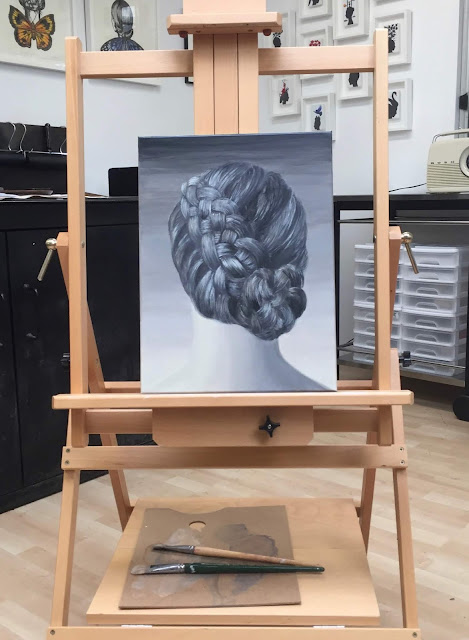 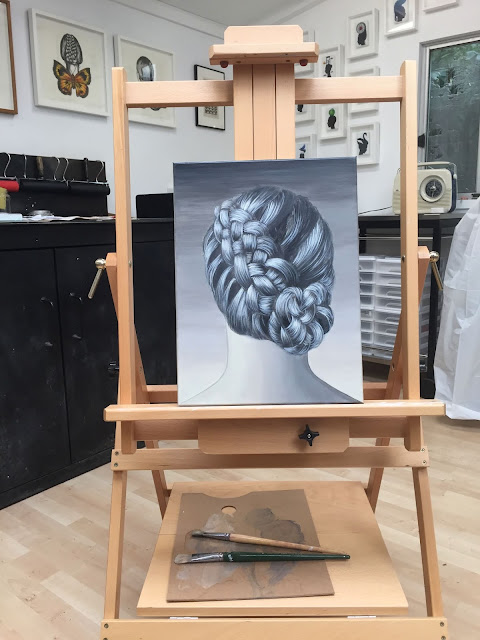 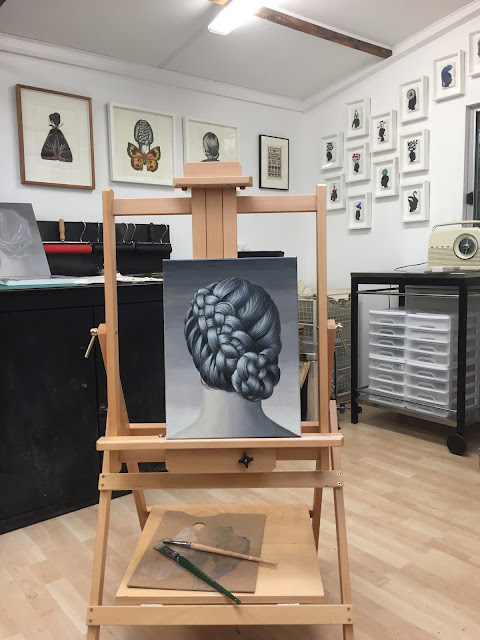 Posted by Deborah Klein at 1:17 PM


On Saturday, 1 December, the Goldfields Printmakers held their final meeting for 2018 over an early pre-Christmas brunch at Kittelty's, the Art Gallery of Ballarat's splendid cafe.


In recent weeks, GP founder James Pasakos and GP member Loris Button returned from IMPACT 10, the international print conference in Santander, Spain. Our group exhibited in the Open Folio section and some members, including James and Loris, also held major shows. Other members, including myself, participated in group exhibitions - in my case, Thinking of Place ll.

The meeting was a timely opportunity to share the news of the acquisition of my artist book Leaves of Absence by the National Gallery of Australia. The first archival pigment prints I ever made were for Not Born Digital, the Goldfields Printmakers project created for IMPACT 9 in Hangzhou, China in 2015. They sowed the seeds for a completely new direction in my work that over the following two years culminated in Leaves of Absence and, more recently, the archival pigment print Bell Jar, 2018. (See following image).

Future Goldfields Printmakers shows will be announced in the New Year, once venues and dates have been confirmed.

Blarney Books and Art's tenth annual Biblio Art Prize exhibition recently travelled from its home in Port Fairy to Tacit Galleries in Collingwood, where it continues until Sunday, 16 December. Two of my works, Bell Jar, an archival pigment print, and Progeny, a unique artist book, are finalists in this year's Biblio.

The photos directly above and below were taken at Tacit Galleries on opening night, Wednesday 5 December.


In other recent news, on Friday, December 7, Shane Jones and I attended the Australian Print Workshop Artist's Party, thrown by the APW as a thank you to all the artists who donated print editions to IMPRESSIONS 2018, its biennial fundraising exhibition.

As in previous years, we were treated to some memorable musical interludes. Guitar duo Graeme Drendel and Rick Amor were a marvellous 'warm-up' act to the fabulous Press Gang, comprising Jazmina Cininas, Julie Forrester, Simon White, Martin King, Adrian Kellett and Graeme Drendel. Printmaking luminaries, all of them, and damned fine musicians too.


As if this weren't enough, there were also prizes. I never win door prizes, raffles and suchlike, so couldn't have been more surprised when my name was one of those drawn from a hat. I won a linocut 'hamper' that included a lino block of the exact size I'm using for a current project, a tube of Charbonnel (my favourite ink), a baren and a fine set of linocut tools. Coincidentally, Shane won an identical prize. We're both feeling rather chuffed. 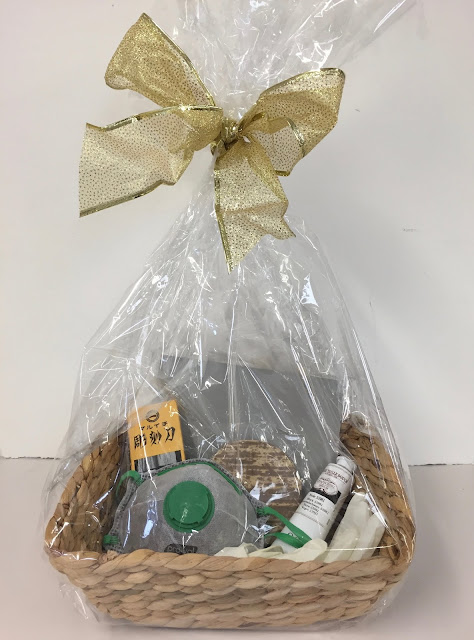 Directly below are just some of the many prints on view in IMPRESSIONS 2018. My linocut, Prelude, is on the bottom row, centre. 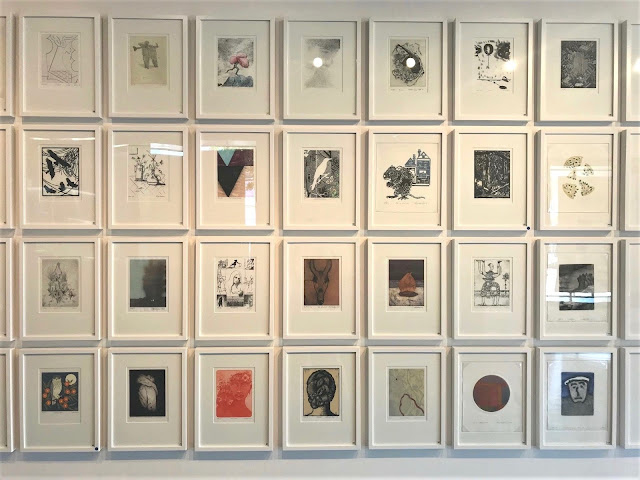 For further details of IMPRESSIONS 2018, including a complete list of participating artists, go HERE.

The show continues to 16 February, 2019. To check the APW's hours over the Christmas break, go HERE.