A visit to Melbourne 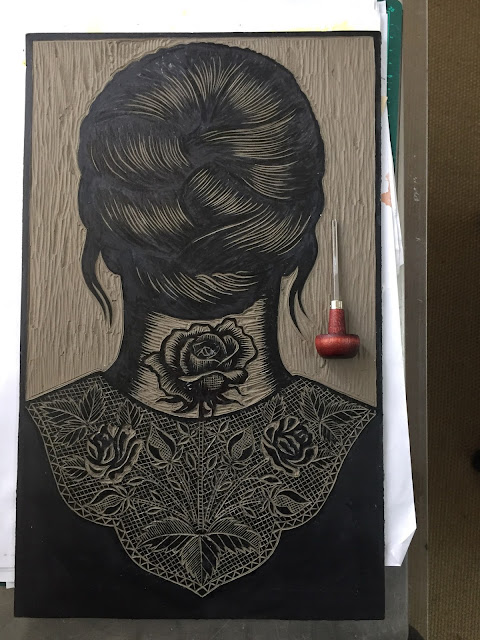 Yesterday we delivered my lino block to the Australian Print Workshop, well ahead of time for the APW Collie Trust Exhibition in March 2021.
For several months, right up to yesterday morning, I’ve intermittently tinkered with the image, trying to second-guess any issues that might arise during the printing process. I couldn’t help myself, despite the ever-present danger of overworking or otherwise stuffing it up. Understandably, it was a considerable relief to save the block from myself and place it in the hugely capable hands of APW master printer, Simon White. This will be the third time I’ve worked with Simon. He also editioned my prints for the 2014 APW Summer School and IMPRESSIONS 2018, the APW’s biennial fundraiser. Collaboration with Simon is always a pleasure and also tremendously instructive. 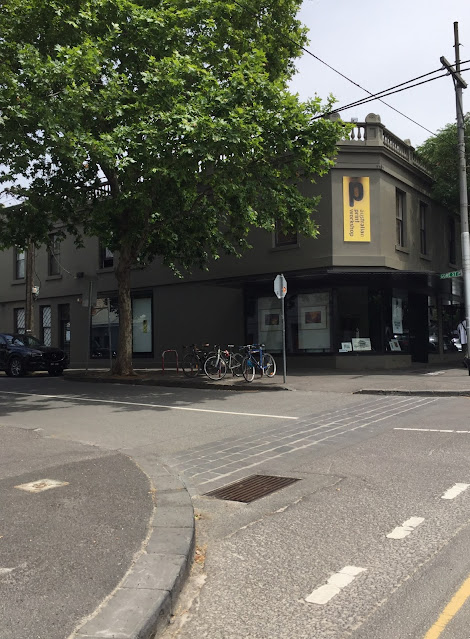 Shane and I were surprised at how relatively quiet the Melbourne streets are, despite the gradual opening up of the city. As a result, we were able to run our remaining errands a lot faster than usual, including stocking up on art supplies from St. Luke Artist Colourmen. 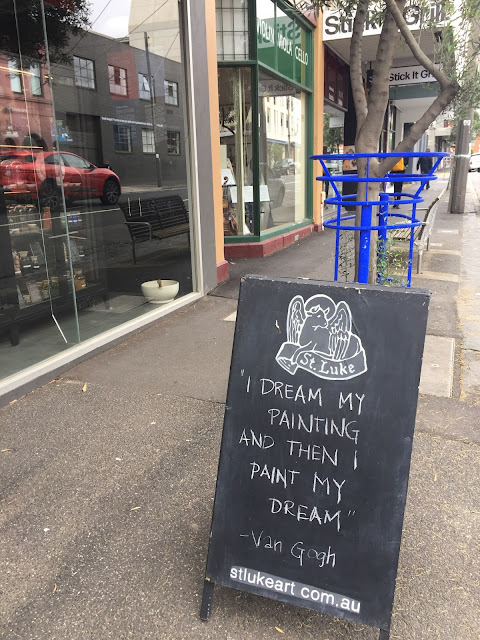 A highlight of our day trip was Rona Green’s delightful exhibition, currently on view in the upstairs gallery of Australian Galleries Stockrooms in Derby Street, Collingwood. 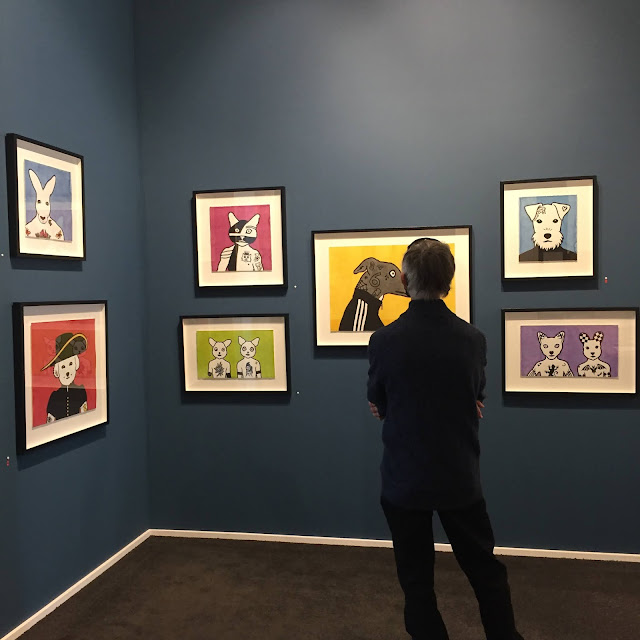 Before heading home we made a side-trip to Williamstown for afternoon tea with our dear friend, Leigh Hobbs. We were well ahead of schedule and managed some quality time by the ocean beforehand, followed by a stroll around Williamstown’s lush Botanic Gardens. It sure felt good to breathe the sea air again. It’s been awhile. 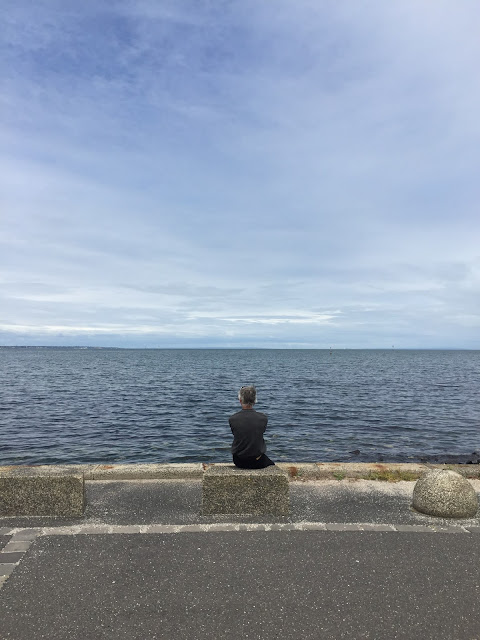 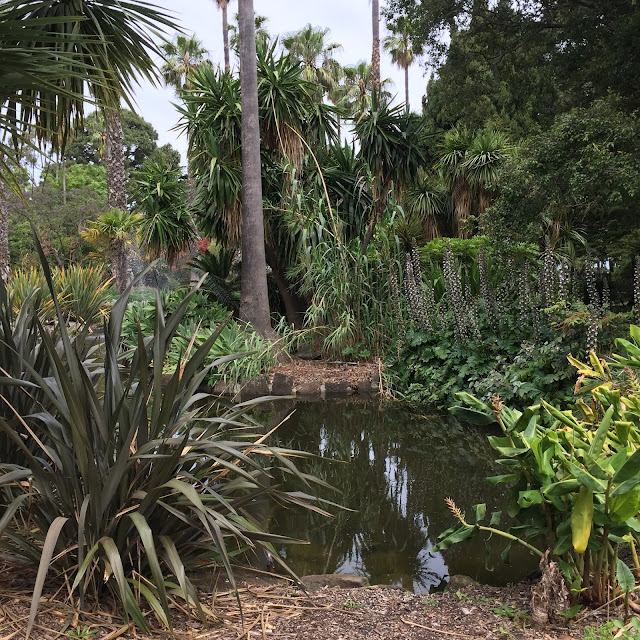 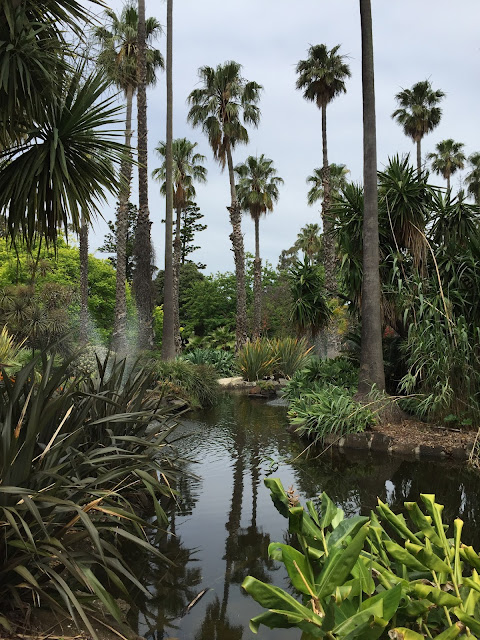 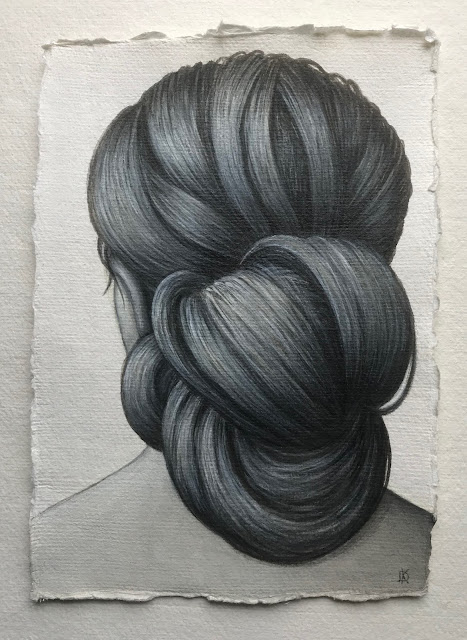 In this brief follow-up to Looking forward (Blog Post Monday, September 28) are the latest updates on my future exhibitions, most of them originally scheduled for 2020, but postponed until 2021.

The George Collie APW Award Exhibition at the Australian Print Workshop, a joint survey of my prints and those of fellow award recipient, the late Barbara Hanrahan, has now been confirmed for Saturday, 6 March - Saturday, 3 April 2021.

Revised dates for Backstories, my solo show at Stephen McLaughlan Gallery, were also recently confirmed. The exhibition will run from Wednesday, 7 April - Friday, 23 April. The opening event is on Saturday, April 10 2021.

My residency at Geelong Grammar remains penciled in for May 2021, dates TBC.

As previously posted, my solo show at Queenscliff Gallery will run from Sunday, June 3 - Monday, June 21 2021.

Dates for a third solo show, at Gallery on Sturt in the second half of 2021, are still TBC.

The above information may be subject to further changes. Nevertheless, as things gradually open up in this part of the world, it’s heartening to have something more concrete to work towards.

In that spirit, pictured top is my newly completed drawing, Looking forward, 2020, ink and gouache on Khadi paper, 21 x 15 cm.

Posted by Deborah Klein at 8:01 PM

I have to stay alone in order to fully contemplate and feel nature. The painter should paint not only what he has in front of him, but also what he sees inside himself.

Recently I discovered by sheer chance that the dominant motif in my work for well over two decades has a name. It’s “Rückenfigur”, or “figure seen from the back”. Why did I not know this before? The subject dates from antiquity, but the term originated in the German Romantic Movement of the 19th century and is most closely associated with the painter Caspar David Friedrich, whose work I’ve long admired. In fact, his paintings were the main catalyst for my current body of work, a series of anonymous figures I call “Journeywomen”.

The history of figures viewed from behind spans the entirety of visual culture, including graphics, cinema and photography. Among the painters who have employed the Rückenfigur in their works are Rene Magritte, Man Ray, Salvador Dali, Gustave Courbet, Jean-Auguste-Dominique Ingres and, most notably and consistently, another of my favourite artists, Vilhelm Hammershøi.

The Rückenfigur is often portrayed as an outsider, reflecting a mood of quietude, self-containment and isolation, although she doesn’t necessarily travel alone. Paradoxically, she invites us to share her journey and see the world through her eyes, to the extent that we almost become her.

What's in a name? That which we call a rose

By any other name would smell as sweet.

I’m fairly well versed in the ever-evolving history of  “rear view portraits,” yet this feels like a real light bulb moment. I am amazed at how empowering it is to to know that there is a collective name for them. To my mind, it validates and unifies this somewhat scattered tradition. Moreover, the Rückenfigur addresses a particularly divisive time in our history, when our state of disconnection - from ourselves, from each other and from the natural world - seems greater than ever before. 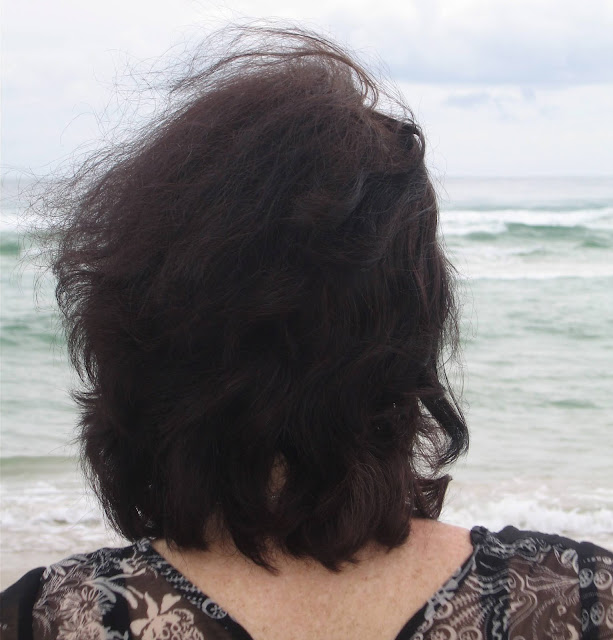 Only connect! That was her whole sermon. Only connect the prose and the passion, and both will be exalted, and human love will be seen at its height. Live in fragments no longer. Only connect, and the beast and the monk, robbed of the isolation that is life to either, will die. 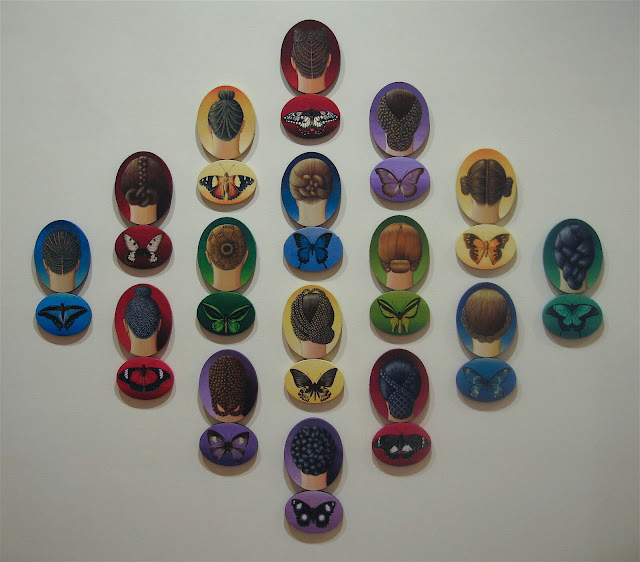 This painting was missing, presumed lost, for a couple of years. In the months following last year’s move, I discovered it in a storage box we had believed to contain packaging materials. (It did, but the individual components of the painting were safely packed underneath).

The work was a finalist in the Geelong Painting Prize in 2002 and toured in the curated group show, ‘The enchanted forest - new gothic storytellers,’ in 2008-2009.

I even wrote a fairy tale based on it. An early draft of the story was published in my first blog post. You can read it HERE. The final version of the tale was subsequently included in my book, There was once... the collected fairy tales (2009).

I’d more or less resigned myself to never seeing the painting again, so much so, that I still find it hard to believe it’s back in my possession.

Posted by Deborah Klein at 8:46 AM