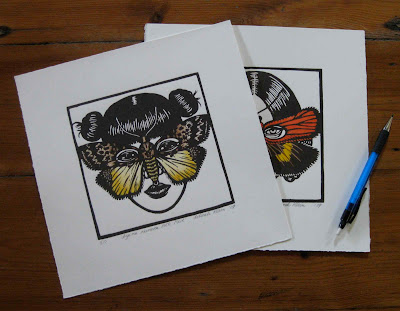 
Lately I’ve been preparing selected linocuts from the Moth Masks and Enchanted Hair Ornaments series for Metropolis Gallery in Geelong - a pleasant, relatively relaxing task to undertake as the old year draws to a close.


It’s been a busy year, but with many highlights. Despite the untimely closure of Gallery 101, where I was booked for a solo exhibition in September, I was able to find a superb alternative venue in Chrysalis Gallery. The show, which ran throughout October, was a singularly happy experience.
I was one of the selected artists for the 2010 Print Council of Australia Member Print Commission.  The entire edition of Red Lacewinged Woman, 2010, linocut, hand coloured) has now sold out. 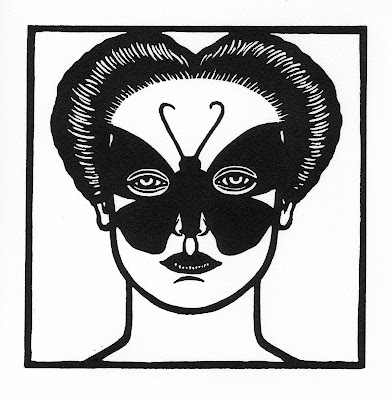 Moth Woman Vigilante #9, 2010, linocut, 15 x15 cm
Participating in Rona Green’s projects is always hugely rewarding. Her 2010 print exchange portfolio Fair and Square, which will be exhibited at Charles Sturt University in Wagga Wagga in April 2011, was no exception. When a project such as this one comes along, it can present artists with a priceless opportunity to push imagery and ideas just that much further. Moth Woman Vigilante #9, made especially for Fair and Square, introduced a new direction for the Moth Masks imagery, which will be developed into a suite and possibly an artist’s book in 2011. 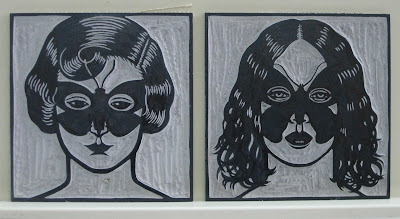 Moth Woman Vigilantes (blocks) 15 x 15 cm
Similarly, The Exquisite Palette at St. Luke Artist Colourmen also encourages experimentation and play. As usual, the participating artists rose to the challenge. This year saw the introduction of the Exquisite Palette Award. With so many outstanding entries, it was a privilege to have my palette Behind the Mask judged Most Exquisite. 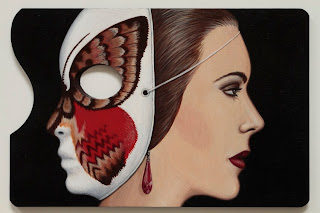 Behind the Mask, 2010, Acrylic on wooden palette
(Photograph by Tim Gresham)
In the coming year I’m particularly looking forward to participating in Freak of Nature, also curated by Rona Green, a print exchange folio and exhibition project involving artists from Australia, New Zealand, the United Kingdom and the United States of America. During September the collected works will be exhibited at Switchback Gallery, Monash University, Gippsland, in conjunction with IMPACT 7, the international printmaking conference at Monash University. The prints will also be exhibited at the King Family Exhibition Space, University of Colorado, Boulder, USA in January 2012.
Metropolis Gallery has invited me for the second year running to exhibit in Contemporary and Collectable, which will open on 9 July 2011.
Two solo shows are scheduled for next year. The first will coincide with my second stint as Artist in Residence at The Art Vault in Mildura throughout June. The second, in September at Woodbine Art in Malmsbury, Victoria, is also one of the Month of Print events connected to IMPACT 7. 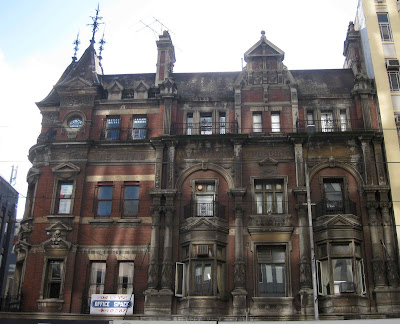 Exterior view of my studio building in Melbourne
(my room is on the top floor, far right)
Much as I look forward to these projects, I’m aiming for a less hectic year than this one has been, with some travel plans and a bit more time out for coffees with friends, balanced, of course, with much quality time in the studio.

Wishing everyone a very Merry Christmas and a safe and Happy New Year.

Posted by Deborah Klein at 6:32 AM

One show ends and another begins 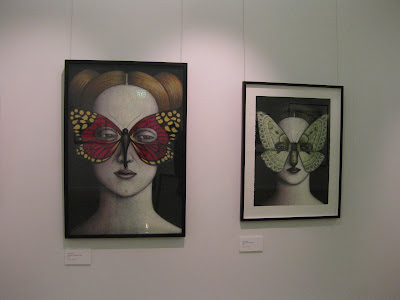 
On the evening of the same day the Australian Print Workshop threw an Artist’s Party to thank the artists who had donated work to IMPRESSIONS 2010, the fundraising exhibition that opened on December 3.
The response at the opening the week before had been overwhelming, beginning with a long queue that started forming over 2 hours before the APW’s doors opened. I was amazed to see that my entire print edition had sold out within the first hour.
A highlight of the party was the one and only appearance of a disparate (and prodigiously talented) band of musicians comprising printmakers and APW staff. 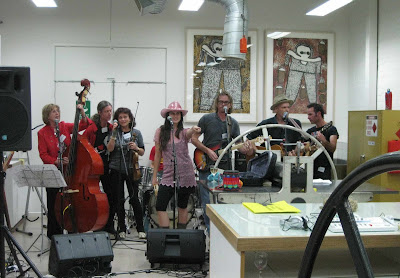 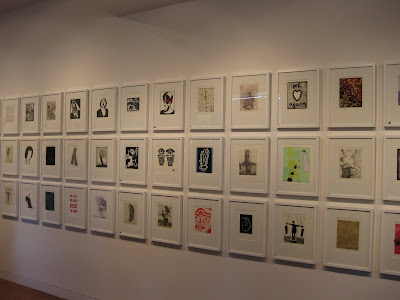 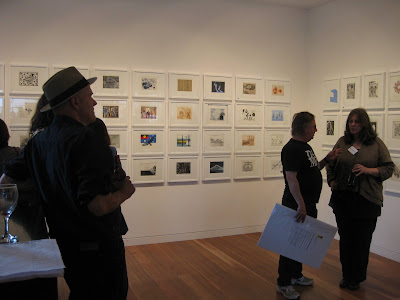 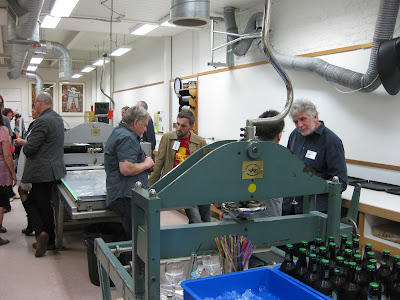 Centre: artists Michael Fitzgerald and the versatile Adrian Kellett, who was also the APW Band's drummer. Right hand side: Artist Wayne Viney with Roger Butler, Senior Curator of Australian Prints and Drawings at the National Gallery of Australia, who officially launched the evening’s festivities.
Following his opening address APW Director Anne Virgo announced that a complete set of the exhibiting artists’ APW Artists Proofs (APW A/P 2) has been gifted to the National Gallery of Australia.

For full details of IMPRESSIONS 2010, including participating artists and opening hours, scroll down to Blog Post Saturday, November 20.
Posted by Deborah Klein at 6:40 AM 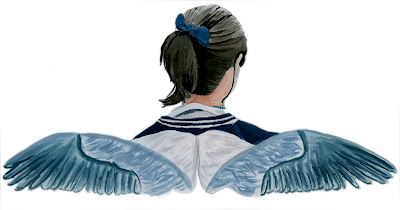 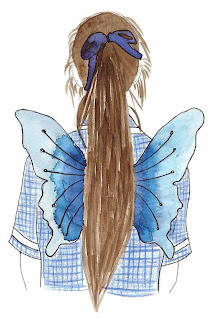 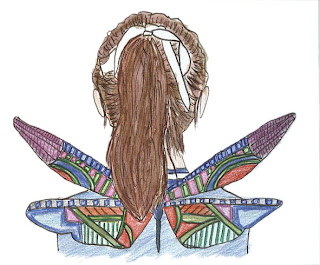 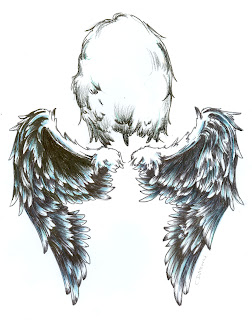 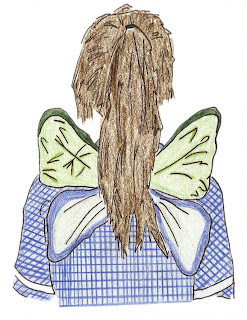 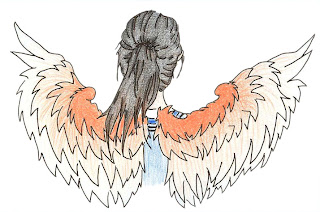 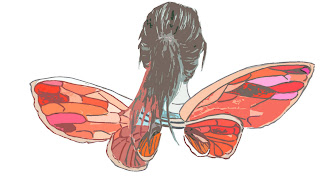 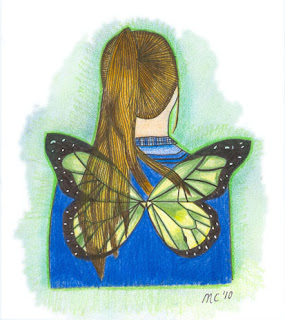 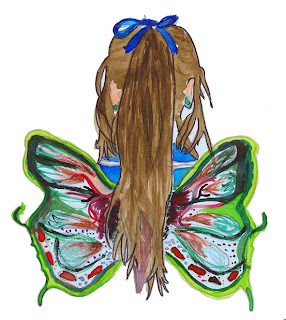 Ellen Soust
Recently I received a wonderful surprise in my email inbox. Kate Murray, who teaches Art and Visual Communication at Lauriston Girls' School in Armadale, wrote to tell me that she had taken her Year 8 students to see my exhibition Natural Histories at Chrysalis Gallery . Back at their school the students were invited to create their own interpretations of the Winged Women paintings.
Three of her students’ drawings were attached to Kate’s email. I loved them, and was delighted when Kate offered to send some more examples. These arrived yesterday, and all are now reproduced above.

Acknowledgements (and warm thanks) to Kate Walker and the gifted young artists Alice Li, Ellen Soust, Georgia Sinclair, Isobel Caldwell, Jieshu Li, Julia Bell, Julienne Soo, Maddie Clark and Shervene Tan for giving me permission to publish their work on my blog.
Posted by Deborah Klein at 6:47 AM