This second of a two-part post focusing on Dorothy Parker's writings that have directly and indirectly inspired my own work features three more of her verses and the opening paragraphs of the story Sentiment. Unfortunately, it’s too long to reproduce entirely (including its bittersweet ending). I hope that those not familiar with the tale will be encouraged to seek it out in book form. For me, Parker’s short stories are her finest literary achievements. Several of the most memorable, including Sentiment, are interior monologues.

To sample another of her stories that take this form - and for a complete contrast in mood - revisit Dorothy Parker’s  The Waltz, Blog Post Sunday March 8, 2009, by clicking HERE.

A word to those wanting to make a closer acquaintance with the work, with the intention of forming a more lasting relationship: ultimately,  her words are best experienced by way of the privacy and intimacy of the printed page, not on a computer screen.

It’s better here in this taxi than it was walking. It’s no good my trying to walk. There is always a glimpse through the crowd of someone who looks like him – someone with his swing of the shoulders, his slant of the hat. And I think it’s he, I think he’s come back. And my heart goes to scalding water, and the buildings sway and bend above me. No, it’s better to be here. But I wish the driver would go fast, so fast that that people walking by would be a long gray blur, and I could see no swinging shoulder, no slanted hat. It’s bad stopping still in the traffic like this. People pass too slowly, too clearly, and always the next one might be  - No, of course it couldn’t be. I know that. Of  course I know it. But it might be, it might.

And people can look in and see me, here. They can see if I cry. Oh, let them – it doesn’t matter. Let them look and be damned to them.

Yes, you look at me. Look and look and look, you poor, queer tired woman. It’s a pretty hat, isn’t it? It’s meant to be looked at. That’s why it’s so big and red and new, that’s why it has these great soft poppies on it. Your poor hat is all weary and done with. It looks like a dead cat, a cat that was run over and pushed out of the way against the curbstone. Don’t you wish you were I and could have a new hat whenever you pleased? You could walk fast, couldn’t you, and hold your head high and raise your feet from the pavement if you were on your way to a new hat, a beautiful hat, a hat that cost more than ever you had? Only I hope you wouldn’t choose one like mine. For red is mourning, you know. Scarlet red for a love that’s dead. Didn’t you know that?……

Inscription for the Ceiling of a Bedroom

Daily dawns another day;
I must up, to make my way.
Though I dress and drink and eat,
Move my fingers and my feet,
Learn a little, here and there,
Weep and laugh and sweat and swear,
Hear a song, or watch a stage,
Leave some words upon a page,
Claim a foe, or hail a friend-
Bed awaits me at the end.
Though I go in pride and strength,
I'll come back to bed at length.
Though I walk in blinded woe,
Back to bed I'm bound to go.
High my heart, or bowed my head,
All my days but lead to bed.
Up, and out, and on; and then
Ever back to bed again,
Summer, Winter, Spring, and Fall -
I'm a fool to rise at all! 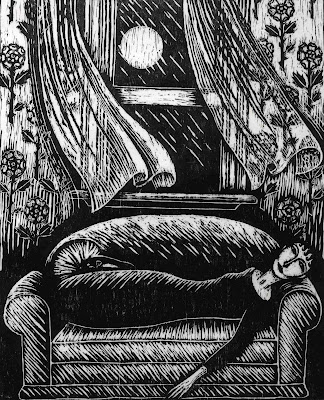 Her mind lives in a quiet room,
A narrow room, and tall,
With pretty lamps to quench the gloom
And mottoes on the wall.

There all the things are waxen neat,
And set in decorous lines,
And there are posies, round and sweet,
And little, straightened vines.

Her mind lives tidily, apart
From cold and noise and pain,
And bolts the door against her heart,
Out wailing in the rain.

Razors pain you;
Rivers are damp;
Acids stain you;
And drugs cause cramp;
Guns aren't lawful;
Nooses give;
Gas smells awful;
You might as well live.


The fragment from Sentiment and the poems reproduced above originally appeared together in The Portable Dorothy Parker, as arranged by Mrs. Parker in 1944. An expanded version is in print as a Penguin Classics Deluxe Edition (paperback) first published in 2006. It’s a handsome volume, although to put it mildly, I’m not an admirer of the cover illustrations, particularly those on the inside back cover.