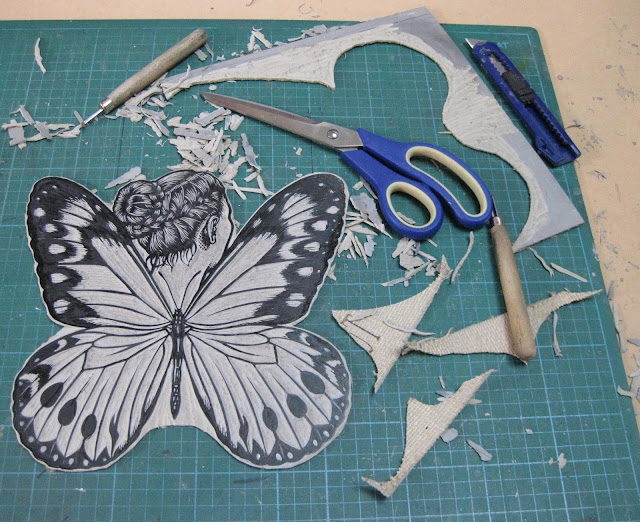 Idepopsis gaura (Dainty paperwing) Woman is another step closer to liberation from the lino block - and so am I.

In future it is my intention to establish some distance between printmaking and myself. This work in progress is intended for a curated group show, admittedly a terrific project, that I was invited into to last year - and make no mistake, I'm giving it my all. It’s the first linocut I’ve undertaken in 2015, however, and with it has come the surprising, but better-late-than-never realisation that I haven't for one minute missed making prints.

There are still a number of printmaking commitments to fulfil before I can confidently cry 'freedom'. At the same time, I’m a firm believer in the truism ‘never say never’. For starters, I still have some of my own print-based projects to complete - but in my own good time. I also look forward to exhibiting a selection of the 2007 Moth Masks linocuts in Queenscliff Gallery and Workshop's inaugural group show later this year.

So although this signals an end of sorts, it is more a new beginning, of only taking on outside projects - of any kind - not just print-based - that will also serve my work and, as much as possible, of operating within a framework that ensures a smooth, continuous workflow and encourages, rather than interrupts, delays or in any other way hinders its development.

Printmaking actually began taking a secondary role in my practice some time ago. I don’t remember feeling happier or more fulfilled than I have in the past 12 or so months, working predominantly on the Homo-insecta watercolours and paintings. Conversely, there are aspects of printmaking I don't enjoy - in particular, the frequently unpredictable, maddeningly inconsistent, dogsbody process of printing and editioning. Moreover, I have never felt entirely at home in the printmaking world. A mentor of mine once remarked - a trifle cynically - that there are no loyalties in the art world. I believe he is wrong about this, but, based upon my experiences, not enough for me to continue pledging undying allegiance to the World of Print - except from the outside, as a longtime admirer of so many of its gifted practitioners and their works.

Nevertheless, for a very long time printmaking was central to my own creative endeavours; I have accumulated a storehouse of priceless memories from those years and met some marvellous people. Late last night I began work on a PowerPoint presentation for an artist talk I’ve been invited to give at the Art Gallery of Ballarat in October. Compiling images for the talk brought about the recognition that some of the prints aren't so bad either.
Posted by Deborah Klein at 10:20 PM