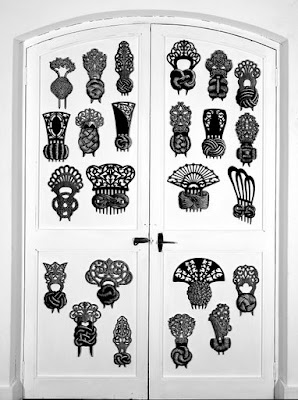 On numerous visits to the Victoria and Albert Museum in London over the last 30 years I have always cut through the Ironwork Gallery, on my way to other galleries of more immediate and obvious interest. The museum’s collection of decorative wrought and cast iron has never been a primary focus. It was only when the fragments of hair and hair ornaments that are the subject of this work began to accumulate that I recalled the Ironwork Gallery and realised how much the visual impact of the collection has gradually crept up on me. Initially its influence was purely visual, but I now realise that the similarities extend further. The majority of pieces (which include large architectural fragments, locks and keys) originally had a purpose that was primarily utilitarian. Separated from their origins and placed on the wall of the museum in a non-contextual, but very beautiful and visually striking salon hang, they are reduced to the merely decorative.

Similarly hair (and the practical and decorative combs and pins that enhance its allure, or alternatively keep it in check) has an existence of its own that is separate from its original context, namely the body. Decorative does not necessarily mean fragile, however. Like the inhabitants of the Ironworks Gallery, it  not only survives, it also transcends time.