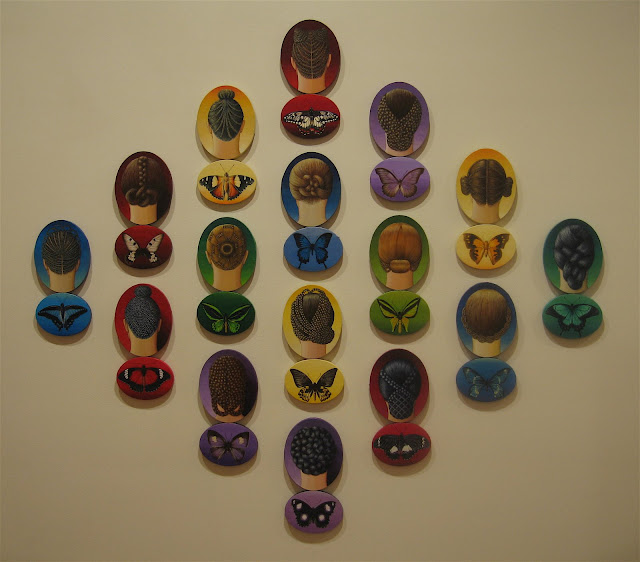 Pictured above: Swarm, 2002, synthetic polymer paint on 32 oval canvases, paired. Large: 25 x 20 cm each; small: 15 x 20 cm each. Overall dimensions approximately 172 x 194 cm. Installation view from the exhibition the enchanted forest - new gothic storytellers. A Geelong Gallery and NETS Victoria touring exibition.
Guest curated by Jazmina Cininas, the exhibition also includes works by James Morrison, Milan Milojevic, Louise Weaver, Louisann Zahra-King and Jazmina Cininas. Launch venue: Geelong Gallery, then touring to Bendigo Art Gallery, Shepparton Art Gallery, Latrobe Regional Gallery, Swan Hill Regional Art Gallery, Dubbo Regional Gallery and Tweed River Art Gallery during 2008-2009.
SWARM
A fairy tale by Deborah Klein
Once in another time not so very long ago there were 16 sisters. They lived with their widowed father and younger brother in a fine, respectable townhouse in a fine respectable street in a fine respectable suburb in a fine respectable town. But none of them could honestly say that they were happy or content. You see, while their father and brother were able to venture into the great world outside to study, work for a living and even have wonderful and exciting adventures, they were confined to their home, aside from an occasional shopping trip downtown under the watchful eye of their governess. Until such time as they were able to marry they were expected to oversee the running of the house and always be well presented and polite, especially if called upon to assist their father when he entertained his friends and colleagues. Certainly they had lessons, but their governess was under strict orders that they perfect their cooking and sewing skills (which were frankly appalling) rather than advance their learning in the arts or sciences.
Their father and brother were respected entomologists whose butterfly collection was famous worldwide. The daughters begged their father to let them help with the collection. They longed to venture out and join in the hunt and maybe discover and name some new species, even though they knew the credit would ultimately be given to their father and brother. That’s the way it was in the olden days, you see.
He finally relented and let them come along on a butterfly hunting expedition in the forest not far from their house. They had always longed to go there as they had heard that it was enchanted. When they arrived they had to admit there was indeed something magical and mysterious about it and longed to explore its hidden depths. But they knew they were there for a very specific reason and very soon they were completely engrossed in the task at hand. Their father was grudgingly impressed at their success. Well before the day’s end they had managed to capture a great many butterflies, every one of them a truly magnificent specimen. His daughters were thrilled, as it seemed that he might take them seriously at last.
They carried their prey home in jars with holes drilled in the lids. Late that afternoon, before hurrying off to the monthly meeting of the Entomological Society, their father and brother took the sisters upstairs to their laboratory and explained how to kill and mount their captives. Thousands of specimens already collected by their father and brother were fastidiously pinned and arranged in a series of glass cases lining a huge room that, along with the laboratory, occupied the entire second storey of their house. With a sudden pang, the sisters had to admit that they felt a certain affinity with them.
Their eyes then turned to the butterflies still fluttering gamely in their glass prisons and they knew at once that they couldn’t bear to kill them. As one they moved to free them, knowing full well that their father would be furious and that in giving these beautiful creatures their freedom, they may have lost the chance to gain their own.
The oldest girl opened the window to their father’s study, and one by one they unscrewed the lids of the jars. Instead of flying away, however, the butterflies flew madly around the room as if they had completely lost their bearings in the excitement of escape. But soon they gathered together to form a huge fluttering cloud of kaleidoscope colours. It was a marvellous sight. Over the gentle but determined sound of their beating wings, the girls could hear what sounded like a faint voice. They could not believe their ears. Ordinarily it would not have been audible to humans, but spoken collectively its sound was unmistakeable. ‘Join us’ they said. ‘Fly away with us and be free forever.’
The girls exchanged glances and in less time than the single beat of a butterfly’s wings their decision was made. One by one they followed the butterflies through the open window. But instead of plummeting downwards to almost certain death, they were wondrously, miraculously airborne, up, up, up into the orange coloured sky, a fantastical swarm, heading for freedom and happiness in the Enchanted Forest.
Posted by Deborah Klein at 2:53 PM