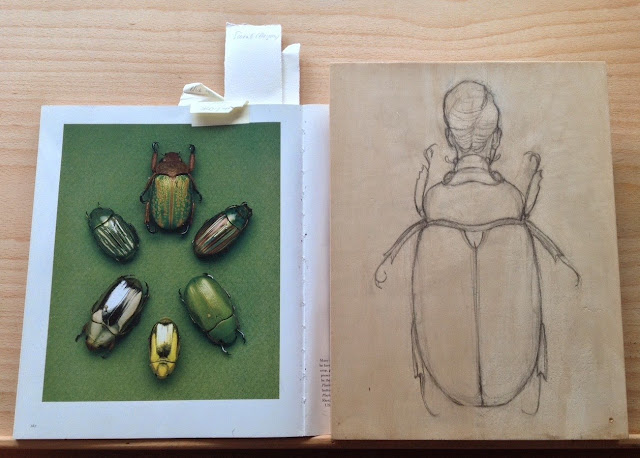 The current Homo-insecta paintings on wood are companion pieces to the watercolours (2014 - present) that I’ve put on temporary hold while I get this series under way. As mentioned in a previous post, this is not the first time I’ve painted on wood. In past times, however, the surface was prepared with two or three coats of gesso, with a light sanding (using a fine-grained sandpaper) in between each layer. The preparation of these panels is similar, except that instead of gesso, the wood is coated with a clear primer, resulting in a protective, non-darkening surface which retains the subtle wood grain. After the figure is outlined in pencil, 2 – 3 coats of gesso are applied to the image area, through which the outlines of the drawing remain visible. 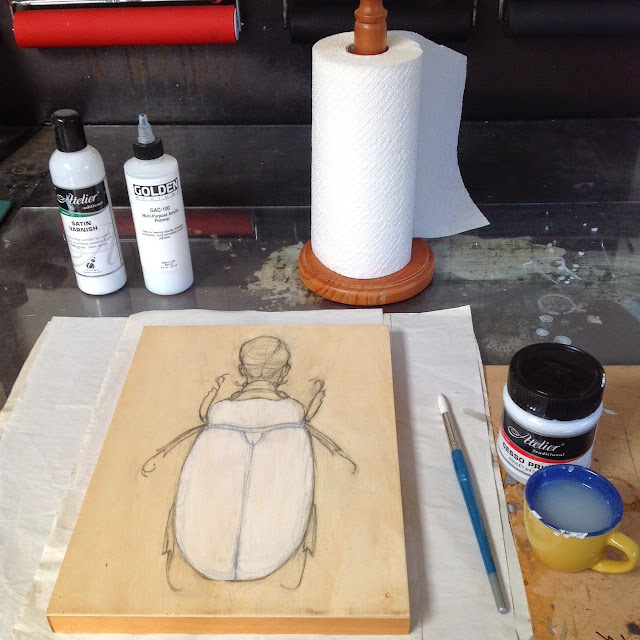 The first paintings on small square panels measuring 20 x 20 cm were essentially an experiment to get a feel for this new method of working and, as much as possible, learn to deal with any technical challenges it might throw my way.

Plusiotis victorina Beetle Woman is the third Homo-insecta to be painted on a panel measuring a slightly larger 32 x 23 cm. Still at the relative beginning of a wide, frequently daunting learning curve, I’ve learned some key lessons from my previous efforts – principally, the necessity to work with even more than usual care, leaving very little to chance. The exposed wooden surface is particularly unforgiving in regard to pencil marks; if there are any mistakes in the drawing, or I simply want to make a minor adjustment, it is almost impossible to remove unwanted marks that fall outside the painted area. In many other instances, alterations and erasures (notably in the powerful large scale drawings of William Kentridge) can lend tremendous vigour to an image. The Homo-insecta series, however, takes natural history illustration as its point of departure, and a meticulous aesthetic and sense of stillness is essential. Erasures and alterations merely make the image look grubby. 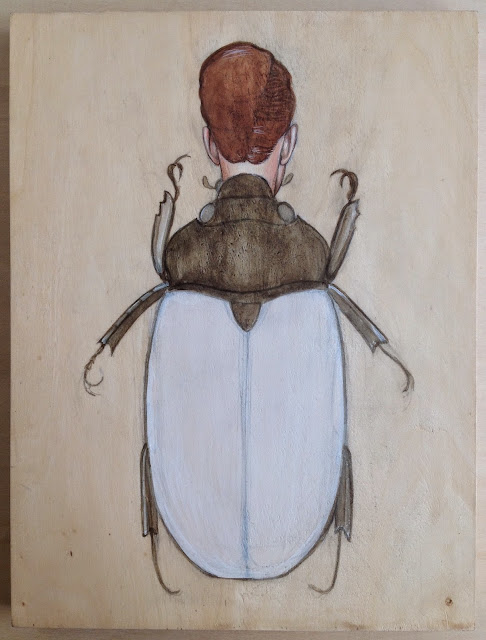 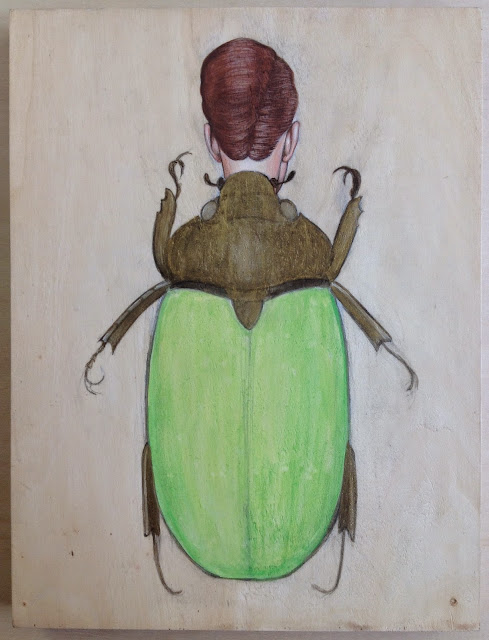 The fast drying nature of acrylic paints can be a plus with smaller sized works, but as the scale increases, the blending of colours – for example, skin tones – can be extremely difficult. In the two stage views directly above, the first layers of colour have been applied. Painting wet-on-wet, a standard blending technique in oil painting, doesn't always work well with acrylics; all too often the paint lifts completely away. Instead, I'm gradually building areas of colour and tone via a series of thin washes, first making sure that each previous layer is completely dry.
Posted by Deborah Klein at 7:00 AM