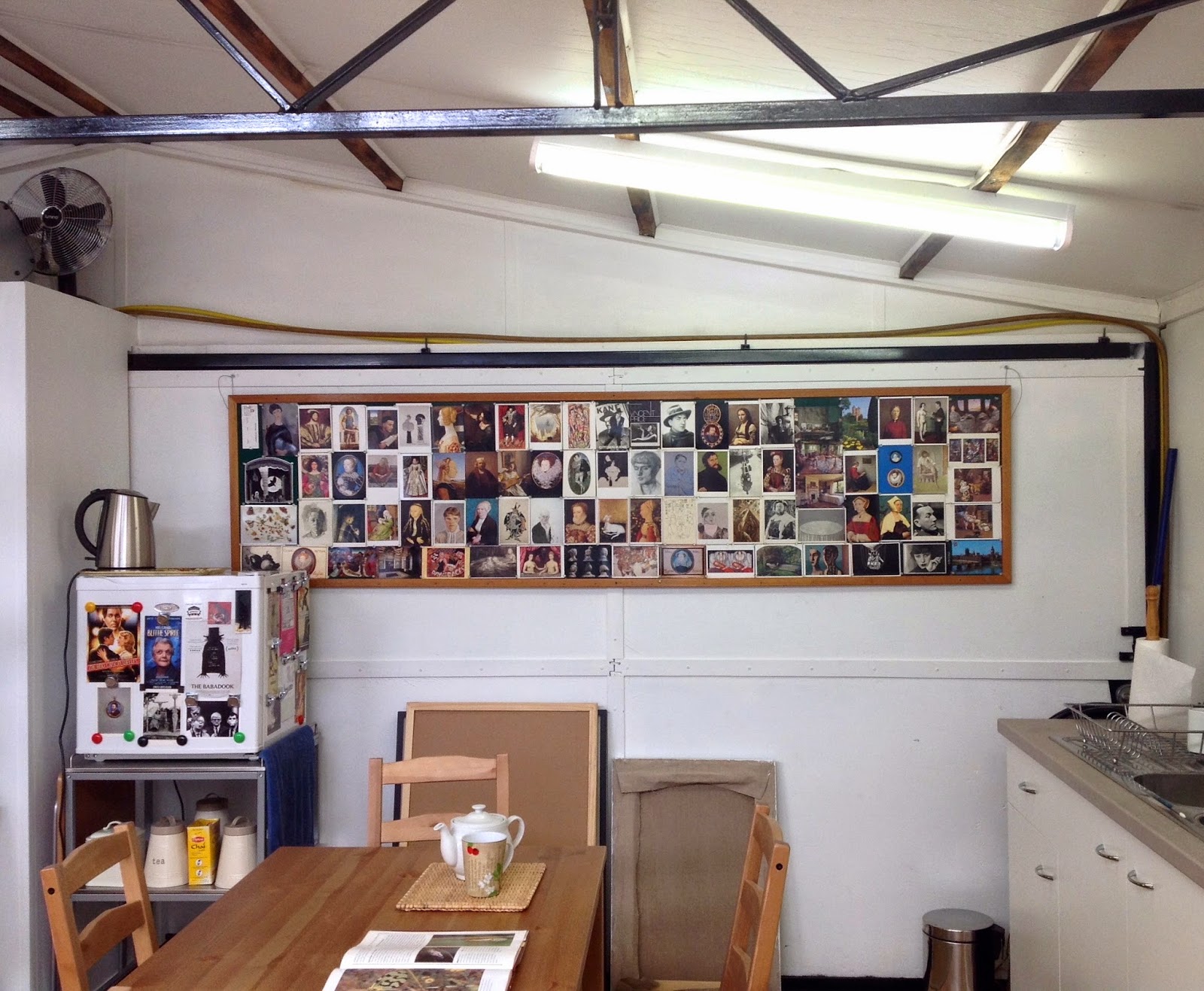 As the first month of 2015 nears its end, my principal focus remains on the Ballarat studio: further personalising the space and surrounding myself with as much essential reference material as possible before beginning the next phase of my work.

The final undertaking – at least, for now – has involved gathering together the majority of my enormous postcard collection and making a selection for the large noticeboard that hangs in the kitchen area of the studio. For many artists, postcards provide vital and affordable lifelines to the original artworks. My own postcards have been compiled over a period of over thirty years, mainly from museums in Europe, but also the US and Australia. 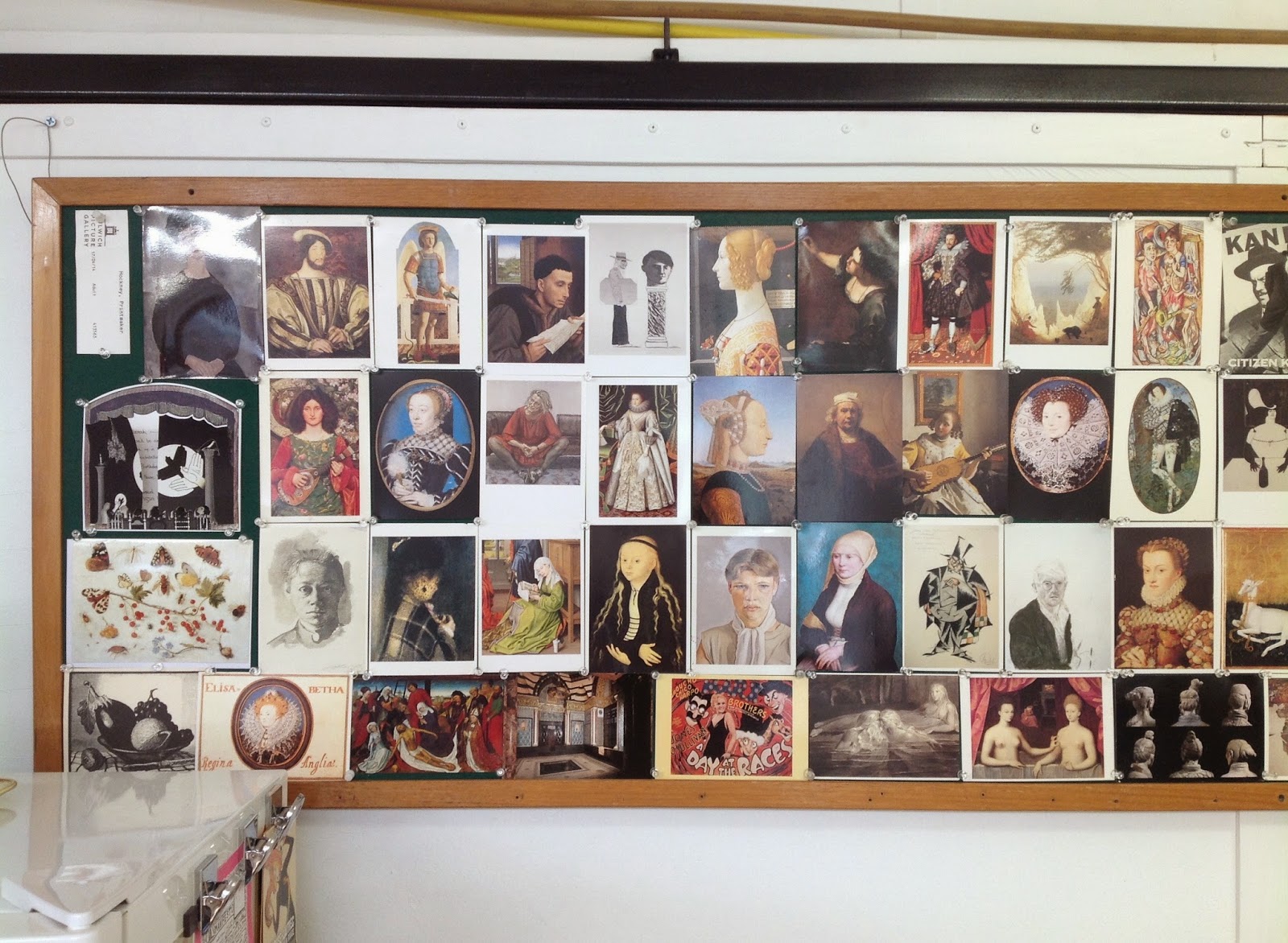 There are some cards that will always make the cut (for example, the postcard of Orson Welles) and even if the same reproductions aren’t included, there are numerous artists (among them, David Hockney, Rembrandt, Nicholas Hilliard, William Larkin, Hans Holbein, Rogier van der Weyden, Gwen John, Paula Rego, Max Beckmann, Lucas Cranach the Younger, Lucian Freud, Kate Bunce, Stanley Spencer, Piero della Francesca, Käthe Kollwitz, Rene Magritte, Jean and Francois Clouet) whose work will always have a place in my Personal Pantheon. 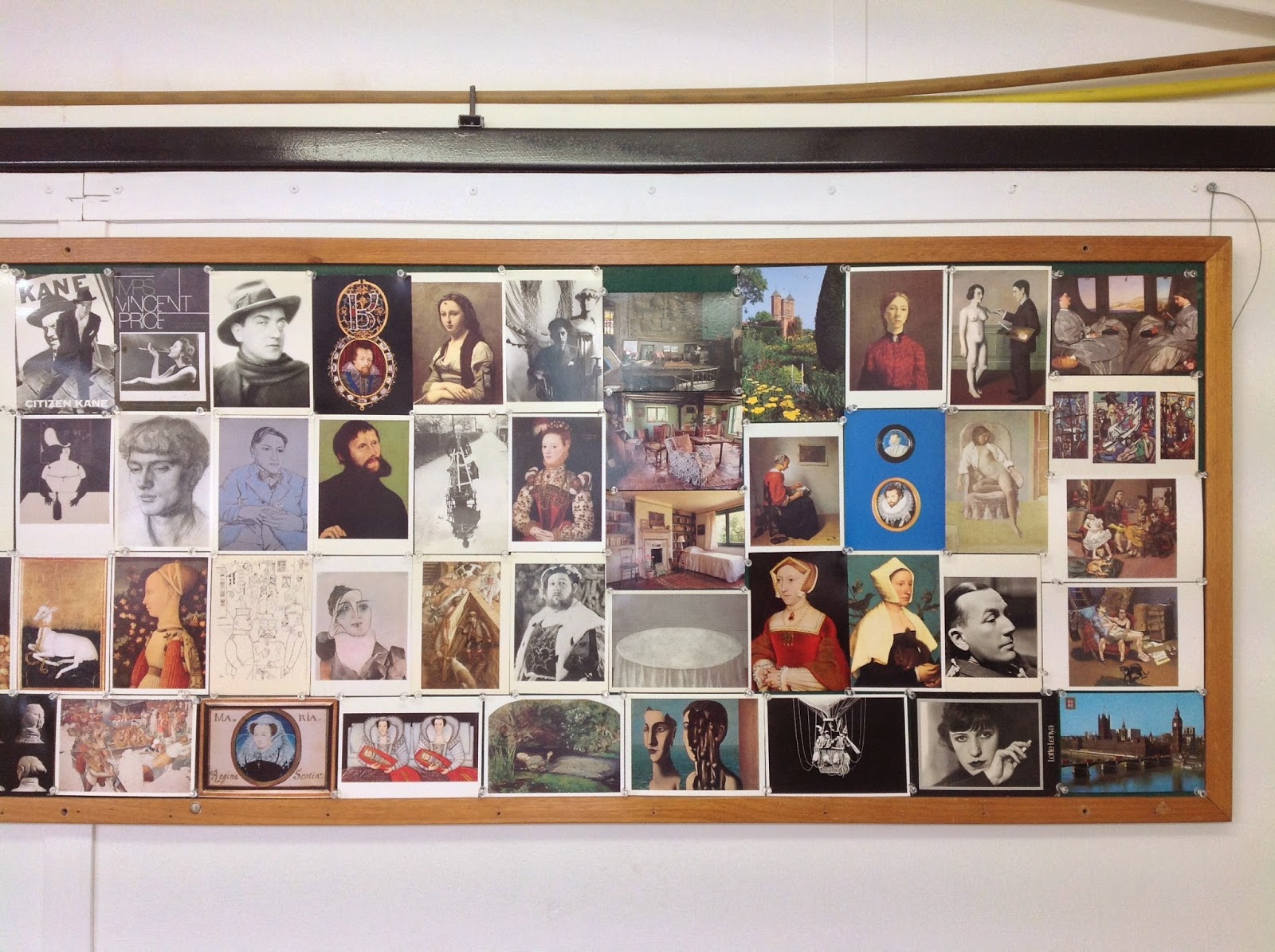 Like many of us, I’ve long been fascinated by the spaces of creative people. Two of my personal favourites feature in the collection: Monks House, the home of Leonard and Virginia Woolf, and Vita-Sackville West’s writing room and garden at Sissinghurst.

A handful of postcards were acquired from Parisian museums in 1993, when I undertook a three-month Australia Council residency at the Cite Internationale des Arts. These cards first graced the wall of the Paris studio. After so many years, they are finally reunited. Although they are no longer grouped together, I've singled them out below: 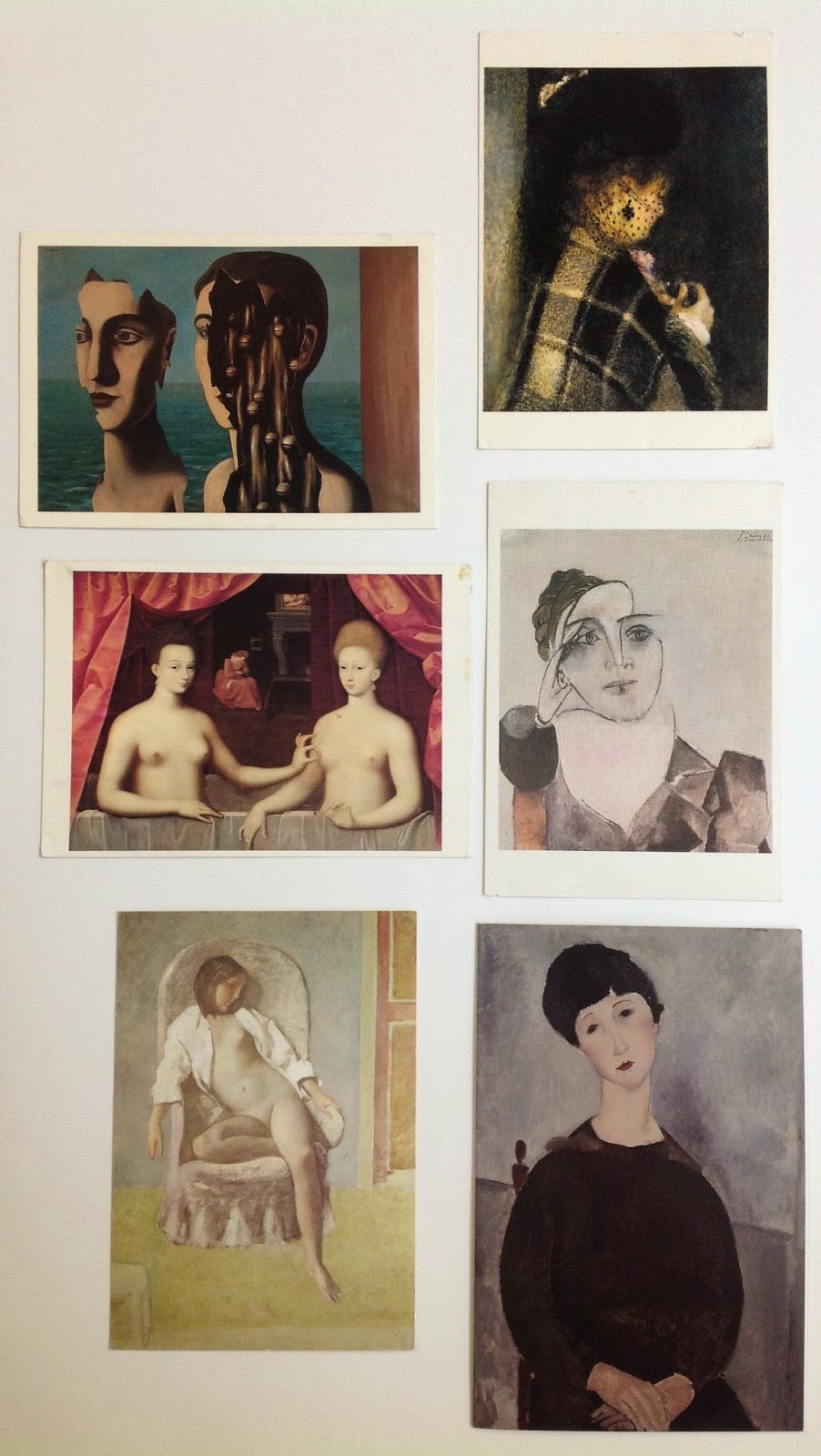 Pictured above, clockwise, they are:

(Details of each as provided on verso of postcards).

Most of these paintings have a similar aesthetic to the work I was making at the time; some, if not all, are still resonant. The derogatory term “chocolate box” has often been levelled at Renoir, but he’s been responsible for some splendid works, including the unassuming little masterpiece pictured above. Of these six works, the Modigliani is the one of which I remain fondest. Residents of the Cité are given a free pass to the museums of Paris. I visited the superb Picasso Museum many times, on some occasions just to see that portrait.


When I was sorting through the two boxes in which most of my postcard collection is stored, I also found some old photographs. One was of an oil pastel drawing, a kind of stylized self-portrait (present whereabouts unknown) that was made during the Paris residency. It’s reproduced below. Unfortunately it’s a reproduction of a reproduction that isn’t very good to begin with. It’s included here because the postcards in question can be seen in the background. 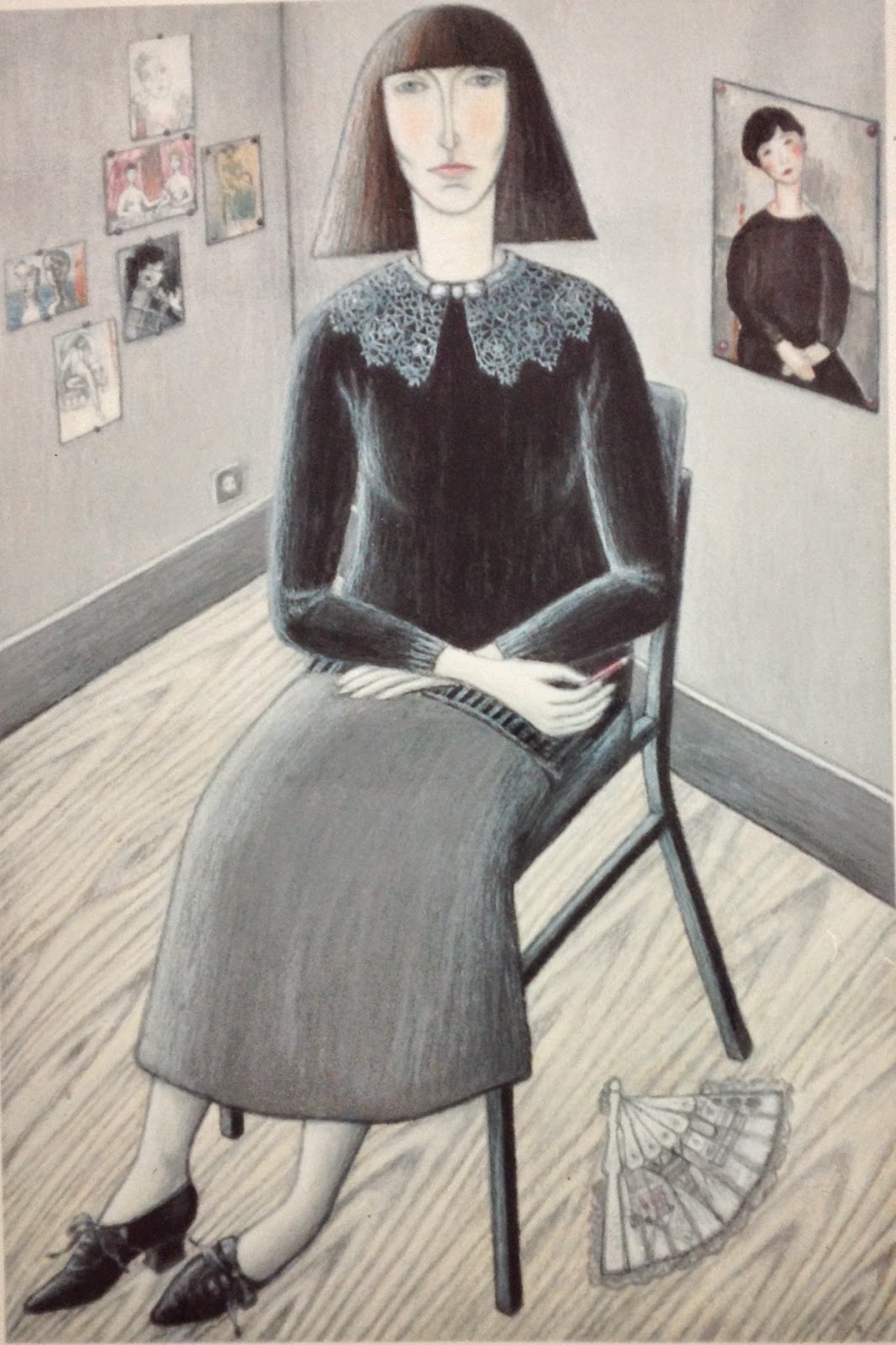 Like my Ballarat studio, the noticeboard display is expected to constantly evolve. Meanwhile, at this point in time, they are both pretty well where I need them to be.
Posted by Deborah Klein at 3:03 PM