Pictured above is a recently completed work that will shortly be heading for London. It is one of eighty-seven drawings by Australian artists that have been included in the forthcoming exhibition Contemporary Australian Drawing 2: Drawing as notation, text and discovery. The show will run from 23 March – 5 April. It is timed to coincide with the Drawing Out conference at the University of the Arts, London, on 28-30 March 2012.

Curator Dr. Irene Barberis invited artists to respond to either (or both) of these assertions from writers Michel Butor and Serge Tisseron:

All writing is drawing; and

The space of writing: what does this mean?

My drawing is a response to the first quote.

The image evolved in part from the tattooed women who debuted in my work in the mid 1990s, and have recently made a comeback in the current fairground imagery. An equally significant point of departure for the composition was Man Ray’s iconic Rayograph Le Violin d’Ingres, 1924 (see photograph below, right hand side).

Individual texts are inscribed on the subject’s back in a multitude of languages, including German, Chinese, Welsh, Celtic, Russian, Urdu, Arabic and Japanese. They each denote a common tattoo motif, for example, a rose, a dragonfly, a spider in a web, an eagle, a tiger, barbed wire, an anchor and a sailing ship. In their original pictorial form they would have encompassed a collection of graphic, instantly recognizable images that could be universally read. Now, unless the viewer is prodigiously multi-lingual, most, if not all, are lost in translation. 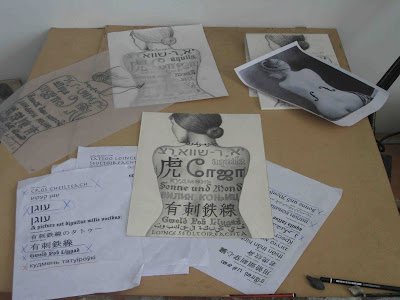 Pictured above: finished work surrounded by assorted reference materials
and preparatory drawings
Posted by Deborah Klein at 11:21 AM