We need a little Christmas 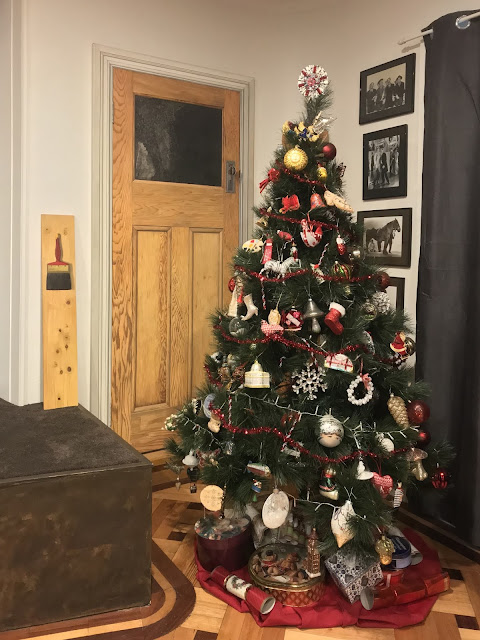 Veteran visitors to this blog will be well aware that Shane and I take great pride in our Christmas trees. We have two of them. The small tree saw many Christmases in our house in St. Kilda before we moved into a warehouse apartment at Abbotsford in Melbourne. In recent years, our larger tree, pictured above, graced the living room of our second home in Golden Point, Ballarat. Late last year, after we’d sold both places and moved into to our new home in Ballarat East, we installed the big tree in our upstairs cinema room. At the time we hadn’t fully settled in and didn’t have the energy to erect the small tree too. This year, both trees are up.

This time last year, our projector wasn’t installed and the big tree took centre stage. Now it’s been placed to the right of the cinema screen alongside two trompe l’oeil paintings by Shane. The small tree, our sentimental favourite of the two, is downstairs in our living room. (It’s pictured below, fourth from top, with Shane’s painting, Christening Gown).  Lately we’ve been sorely in need of some cheering up and got out the trees a little earlier than usual, with some unsolicited assistance from the irrepressible Alice (below, left). 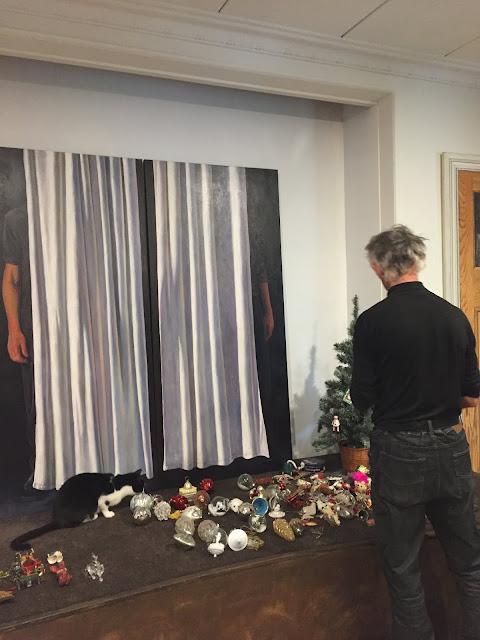 Our Christmas tree decorations hold countless memories of travels and distant friends. Some are from such faraway places as Boston, New York, San Francisco, Berlin and London. Our most recent acquisition, a silver zebra, was purchased at Playing in the Attic, right here in Ballarat. In a year where international travel, and so much else we once took for granted, are just fond memories, our decorations are all the more precious. 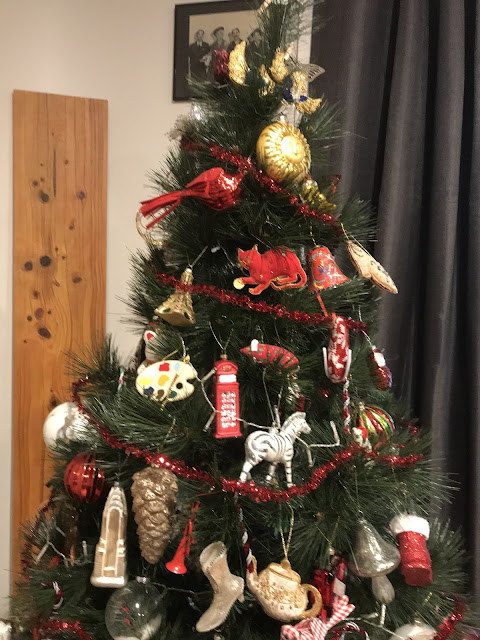 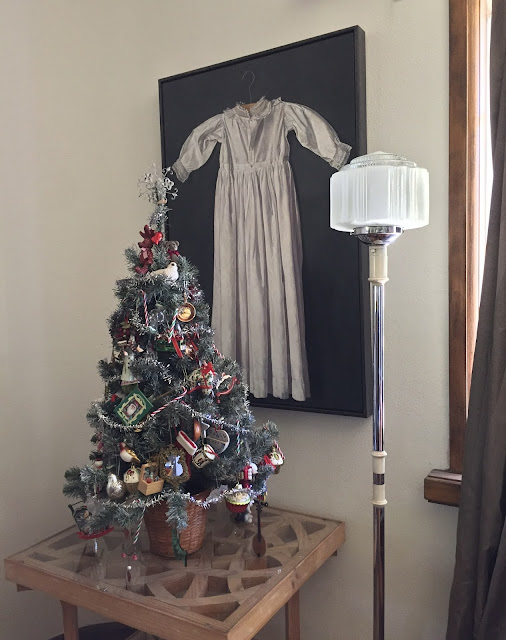 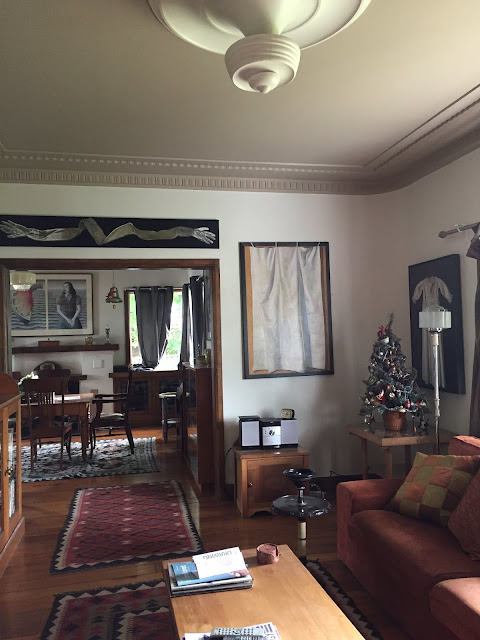 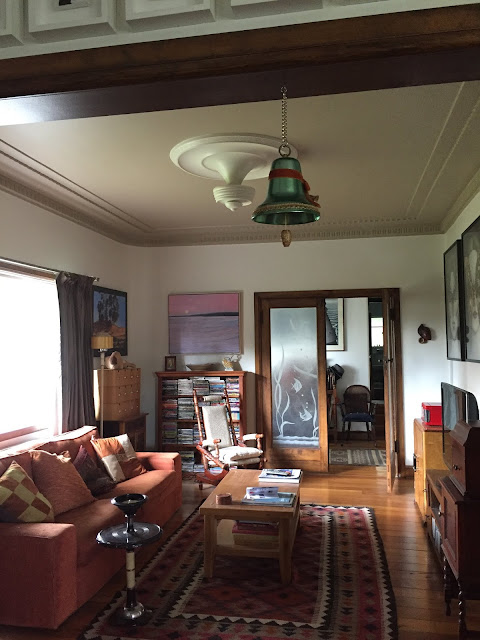 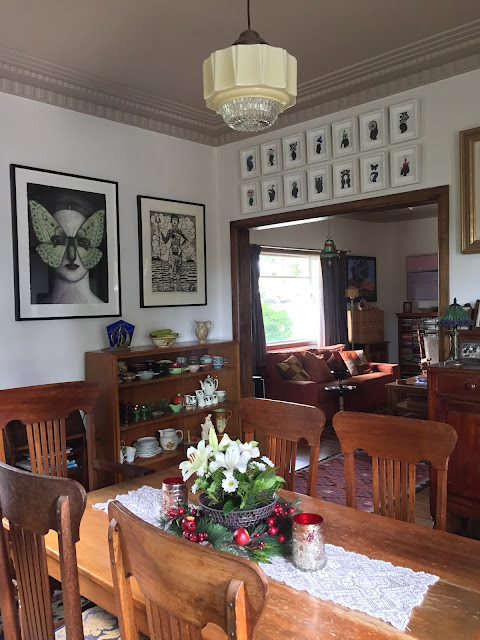 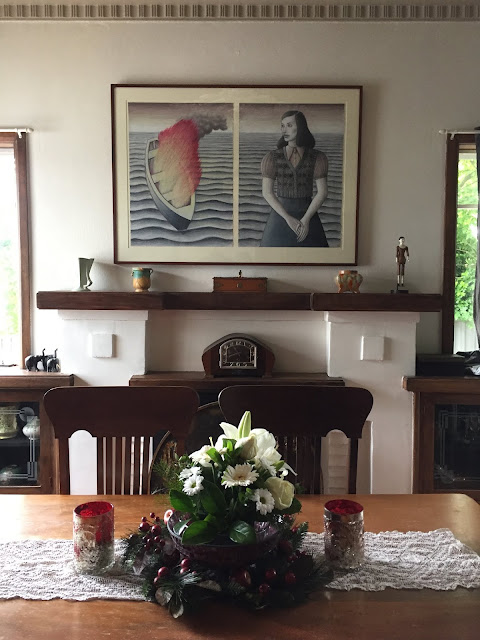 Even the most eternal of optimists amongst us must surely admit it’s been a particularly trying year. The bouquet of white flowers in the two photos directly above is a recent gift from one of my oldest and dearest friends, Bev Murray, who is currently in lockdown in London. She tells me that according to the Interflora catalogue, the arrangement  is called ‘Hope’.
One of many sad losses in the last twelve months was the composer/lyricist Jerry Herman. His song, We Need a Little Christmas, originally composed for the musical Mame, has never felt more timely. Incidentally, Mame is based on the novel, Auntie Mame, by Patrick Dennis, a book I’ve loved since plucking it off my parents’ bookshelf as a child. Mame Dennis is unquestionably my favourite fictional character. A measure of Herman’s success in transposing the novel into a musical comedy is that when I re-read the book, I can tell precisely where every song fits. Prior to the musical, Auntie Mame was a celebrated stage play and film, with Rosalind Russell starring in both. For many, including myself and none other than Patrick Dennis, she is the definitive Mame. For me, the great Angela Lansbury, who originated the role in Jerry Herman’s 1966 musical, comes a very close second. To see her reprise We Need a Little Christmas in concert, go here:
🎄https://www.youtube.com/watch?v=0i14Yb1QMXY
Haul out the holly
Put up the tree before my spirit falls again
Fill up the stocking
I may be rushing things but deck the halls again now
For we need a little Christmas, right this very minute
Candles in the window, carols at the spinet
Yes, we need a little Christmas, right this very minute
It hasn't snowed a single flurry but Santa, dear, we're in a hurry
So, climb down the chimney
Put up the brightest string of lights I've ever seen
Slice up the fruitcake
It's time we hung some tinsel on that evergreen bough
For I've grown a little leaner, grown a little colder
Grown a little sadder, grown a little older
And I need a little angel sitting on my shoulder
Need a little Christmas now
For we need a little music, need a little laughter
Need a little singing ringing through the rafter
And we need a little snappy happy ever after
Need a little Christmas now
Jerry Herman, We Need a Little Christmas, from Mame, 1966
Jerry Herman’s website is here: 🎄http://www.jerryherman.com/
For more about Auntie Mame, including a link to its author, Patrick Dennis, go here:
🎄https://en.wikipedia.org/wiki/Auntie_Mame
Posted by Deborah Klein at 6:55 AM