January is more than halfway over and the year is already gathering speed. Even before the old year ended, Easter buns had made their first appearances in the stores, which is beyond crazy. But before joining the headlong rush into 2019 (hopefully at a more measured pace) I thought it important to note some high points from the year that was. My original list was quite long, but as I have already left it rather late, I've considerably whittled it down.

The new iteration of the 2017 touring show, FROM THE BOWER: patterns of collecting, refigured as PATTERNS OF COLLECTING/From the Bower at the Johnston Collection, was a joy from beginning to end. In all its various forms, the show was a huge part of my life for well over two years. It was a tremendous learning experience on more levels than I can count and a testament to what can be achieved by true creative collaboration. I’ll miss working with Bower Artists Loris Button, Carole Wilson and Louise Saxton, and the unwavering support, enthusiasm and flexibility of Louis Le Vaillant, Director/Curator of The Johnston Collection and his brilliant team. As far as exhibiting experiences go, TJC has certainly set the bar high. 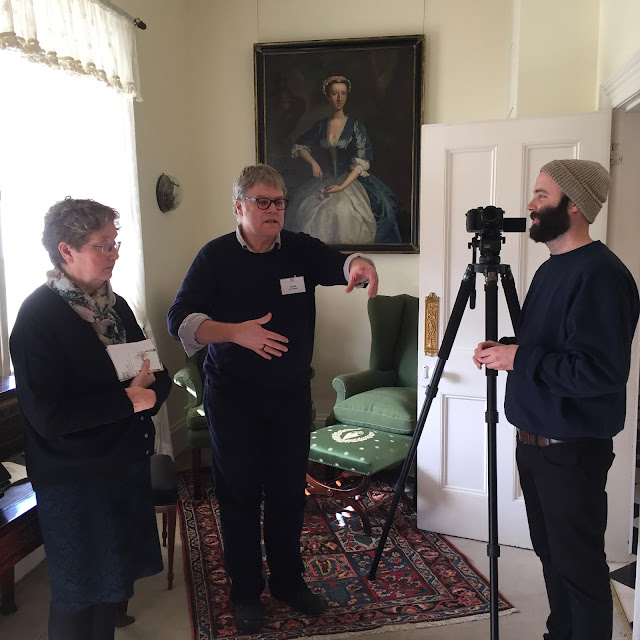 For those who would like to revisit our collective bower, the museum has commissioned a short film. If you weren't able to make it along during the show's long run, it will give you some idea of what you missed. To view the film, click HERE.


For lovers of gothic literature and fans of the horror and science fiction genres, 2018 was noteworthy as the bicentenary of the publication of Mary Shelley’s landmark novel Frankenstein; or, The Modern Prometheus, an anniversary that was widely celebrated throughout the year. The book and its legacy infiltrated a substantial part of the program for Melbourne Rare Book Week. It was also the inspiration for curator Evelyn’s Tsitas’s superlative exhibition My Monster: The Human Animal Hybrid at RMIT Gallery, Melbourne. I’m indebted to Evelyn Tsitas (Senior Advisor, Communications and Outreach) and Helen Rayment (Acting Director and Senior Exhibitions Officer) for inviting me to participate in the latter (see above).


Melbourne Athenaeum Library has been a pillar of support over the last couple of years. In June/July, a residency in connection with Melbourne Rare Book Week afforded me the opportunity to work in one of my favourite places. Mary Shelley’s Frankenstein was the catalyst for the two projects I undertook during the residency: a series of linocuts for Frankenstein's Women, a forthcoming artist book, and Progeny, a one-of-a-kind artist book. 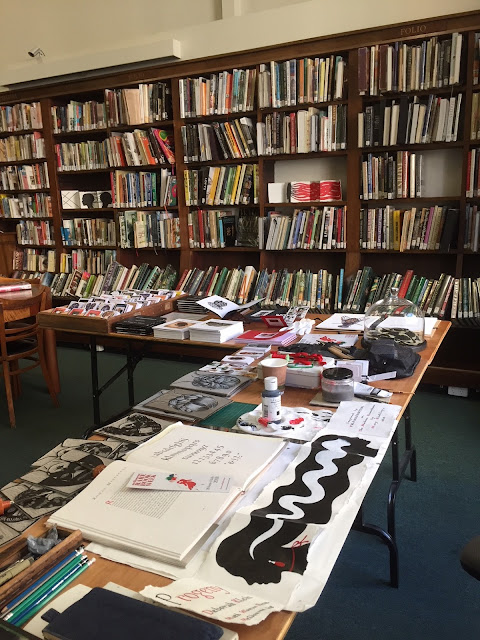 In particularly exciting news, my artist book LEAVES OF ABSENCE was acquired by the Melbourne Athenaeum Library (the site of its launch in late 2017), the State Library of Victoria and, towards the year’s end, the National Gallery of Australia.

For more about LEAVES OF ABSENCE, the Athenaeum Residency and other book-related news, visit Moth Woman Press HERE.

Other personal highlights included St Luke’s fabulous The Exquisite Palette show, which I wouldn’t have missed for the world. Shane Jones and I are pictured above with our embellished palettes. Shane’s painted palette is a trompe l’oeil “sketchbook drawing" of our cat Alice. He has created an uncannily convincing illusion - even the “masking tape” is painted on. 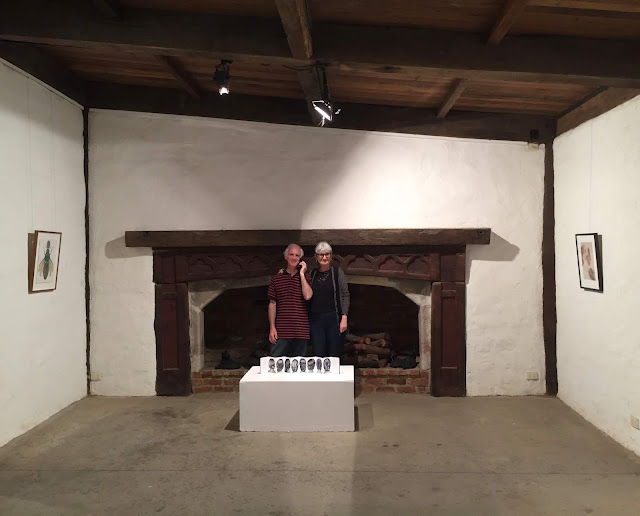 Shane and I were also participating artists in DRAWING STRENGTH, artist/curator Jo Lane's fine tribute to the art of drawing at Montsalvat Arts Centre, which concluded on 6 January. Jo has just published some installation views of the show on her website HERE. 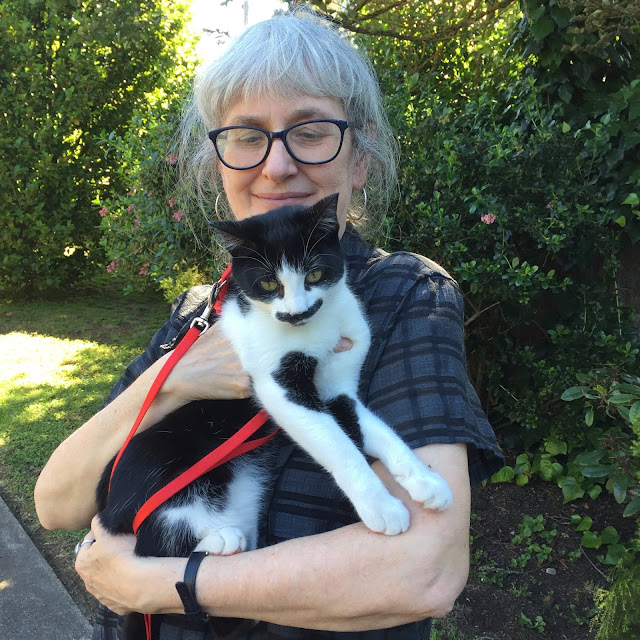 Speaking of pillars of support (as I was several paragraphs back) I don’t know what I’d do without Shane, and neither of us know how we ever lived without little Alice. Funny, lively, mischievous, smart, sassy, daffy, daggy and incredibly bossy, she is not only a constant delight, but is also a reminder not to take ourselves too seriously. 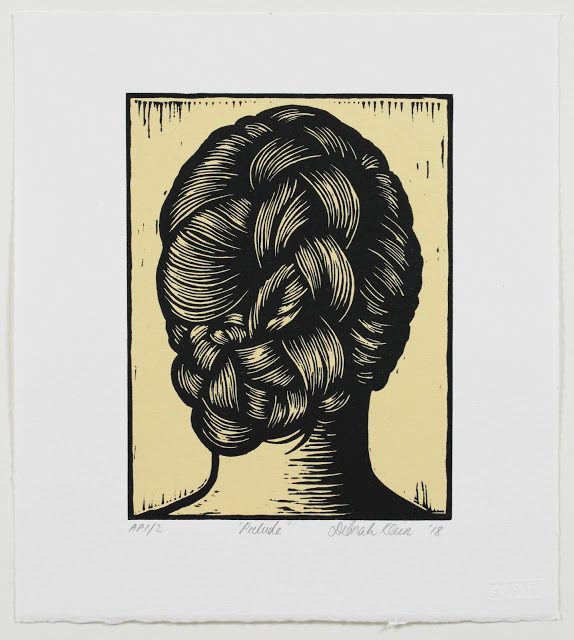 2018 may be fast fading into the distance, but you still have time to see my linocut Prelude in the Australian Print Workshop’s biennial fundraising show IMPRESSIONS 2018 before it finishes on 16 February. 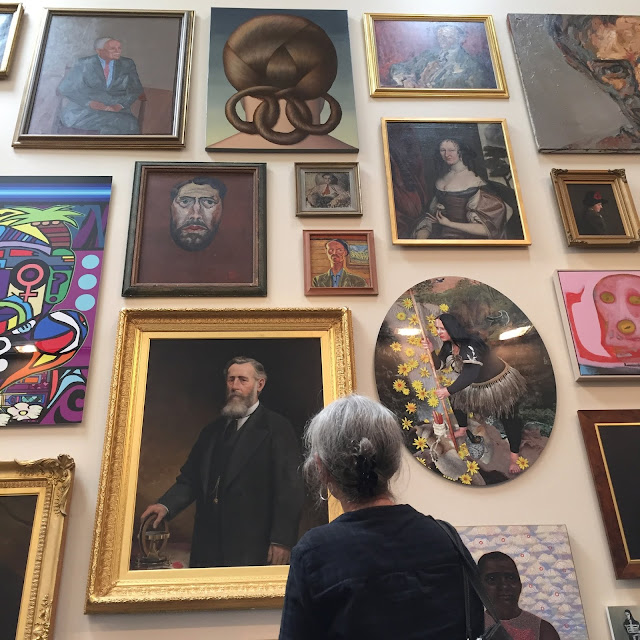 Also carrying over from last year, my painting Vorticist 2 (above, top row, centre) is part of the spectacular new hang in the entrance to the Art Gallery of Ballarat. (See previous post). Photo credit: Shane Jones.

In 2019 I have several projects lined up. I’ll post about each one nearer the time. My primary intention, however, is to continue the year as I’ve already begun it, namely, to further develop the series of paintings I started last year - hopefully with fewer interruptions. Aside from essential side-trips to Melbourne, this will necessitate declining all extraneous invitations, staying put in Ballarat and spending as many hours in the studio as are humanly possible. 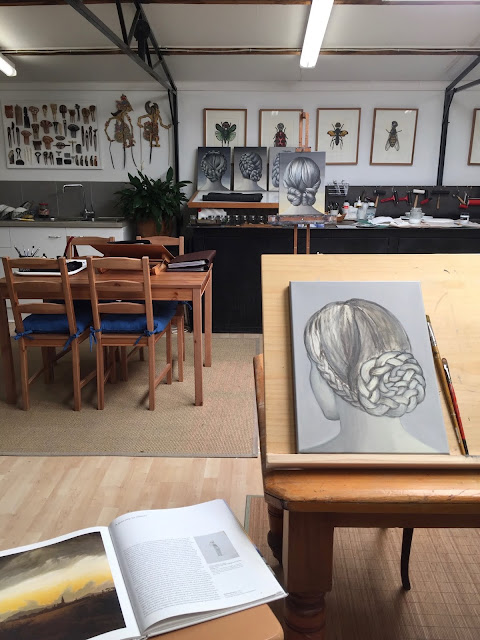 At present Caspar David Friedrich, a handsomely illustrated book by Norbert Wolf, lies open next to my work table.The German Romantic painter's work is a key influence on the current series. I've just glanced down at the chapter heading, which reads: 'A journey to where?' I've no idea what lies ahead on the next leg of my own journey, but I'm very much looking forward finding out.
Posted by Deborah Klein at 8:14 PM