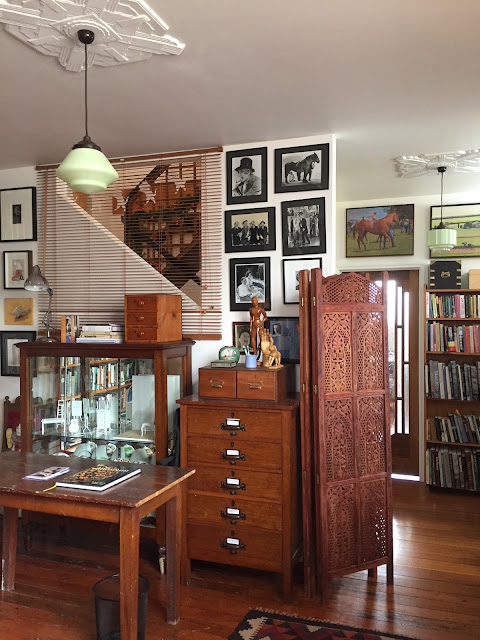 Our place in Abbotsford has been a virtually constant work in progress since we moved here. (I've just asked Shane to remind me how long it's been and he tells me it will be twenty years ago next May. Goodness - where did that almost-two decades go to?) Aside from getting an air conditioner installed upstairs in recent weeks (heaven knows how we survived without one for so long) the other exciting - and considerably more aesthetically pleasing - development is the latest transformation of part of the downstairs area, which, over the years, has variously been used as a studio, an office and a spare bedroom.

It's now a small studio again, an adjunct to the sizeable work table I have upstairs. Shane has done a magnificent job of plastering its ceiling, which continues into the adjoining entrance area, as well as installing art deco ceiling roses and light fittings (the latter sourced in antique markets in the Victorian Goldfields).


Not shown in these views are the storage cupboard to the left of the bookshelves and two wooden plan cabinets directly opposite. The remainder of our books are now stored on bookshelves in the entrance hall; there's a partial view of them in the above photo. After a recent flood, one of several we've had over the years, numerous books had to be rescued from Shane's studio, the entrance to which is behind the art deco door, in the top photo, right. Fortunately, this time the damage, which at at first looked horrendous, was relatively minimal, and all of Shane's artworks were miraculously unscathed.

Shane also built the heavily laden bookshelves which fill the entire back wall of the revitalised space. A section of them can be seen directly below.

I spent the better part of yesterday tidying up the space, particularly the books, with a little help from Alice. She is seen taking a well earned rest in the following two photos.

On this sunny New Year's Eve morning, it's a good feeling to have the space ready and set to go for 2018.

Posted by Deborah Klein at 9:00 AM