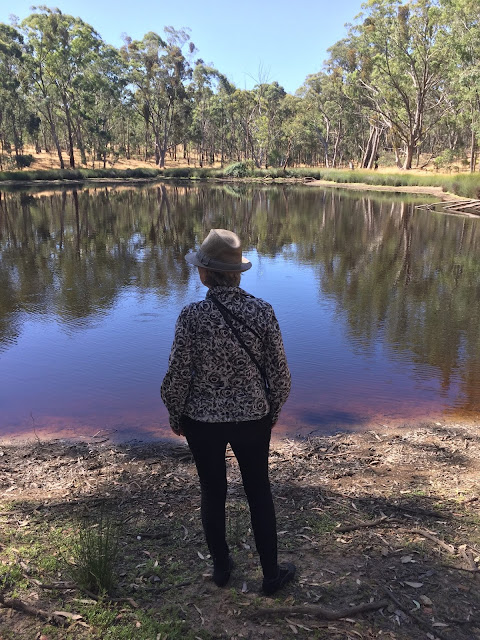 With the artist book, Leaves of Absence, completed (see previous post) Newstead has been very much on my mind of late. At this time of year, our friends Leigh Hobbs and Dmetri Kakmi are usually house sitting there, but this time it's not the case (I believe the owners of the house are currently in residence). It was on a walk with Dmetri and Leigh in the winter of 2015 that I collected the first leaves for what became Leaves of Absence. Some months later, on the back verandah of that very same house, they were the first people I showed the initial trial proofs to. 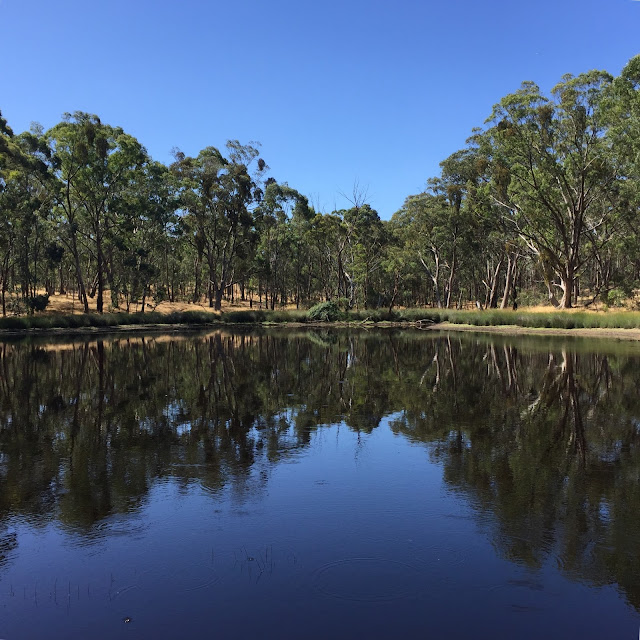 The pull to Newstead has been strong, and last Sunday we finally made it back there. It was in a sense a sentimental journey. I must admit to being a little sad that Leigh and Dmetri weren't there when the first phase of an endeavour that has become such a big part of my life (as they are also) came full circle. 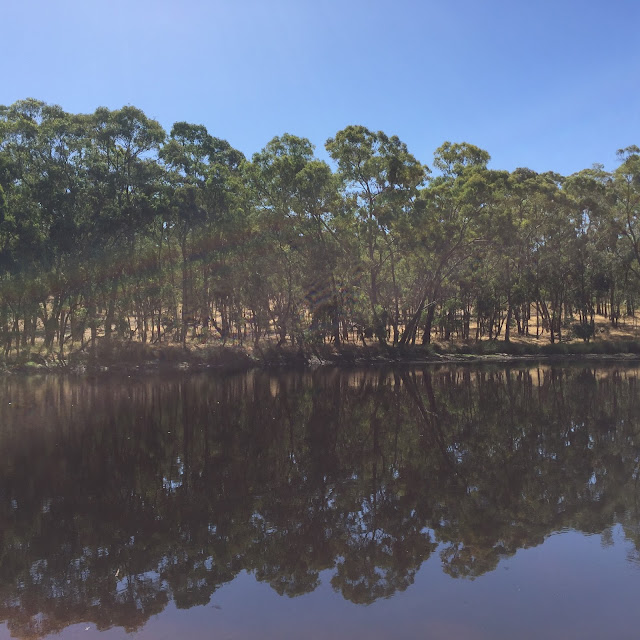 My partner, Shane Jones, has been a tower of support throughout the highs and lows of the project. Shane is pictured below, looking for all the world like a figure from a painting by Caspar David Friedrich. 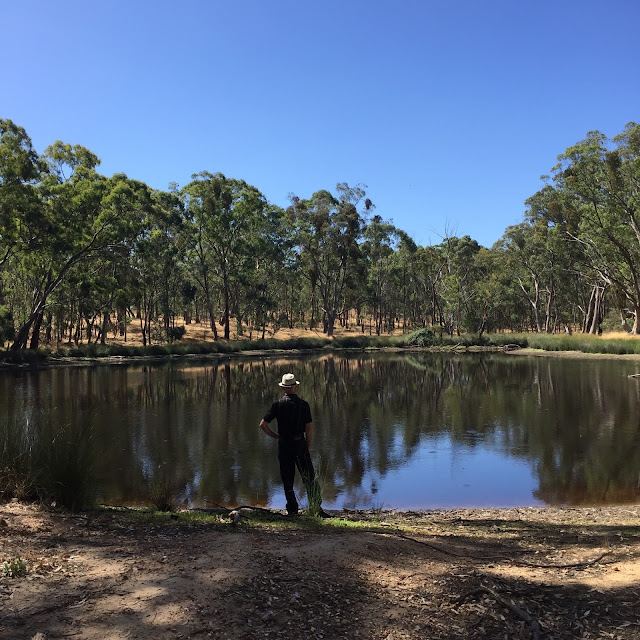 I trust that these photos will convey something of Newstead's unspoiled, tranquil beauty, which for me is combined with more than a touch of magic. I'm especially eager to share them with my faraway friend, Arizona-based iPad artist, Deborah McMillion. In taking on this project, I found myself as far away from my comfort zone as we are from each other. Her insights, advice and support have been invaluable; without her input, the project wouldn't have evolved in the myriad unexpected ways that it has. 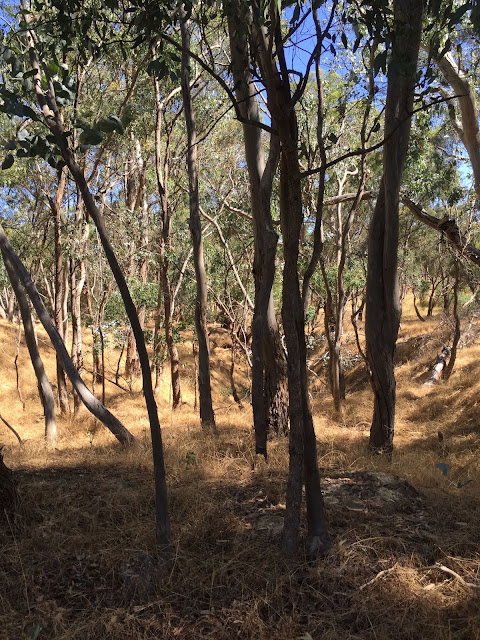 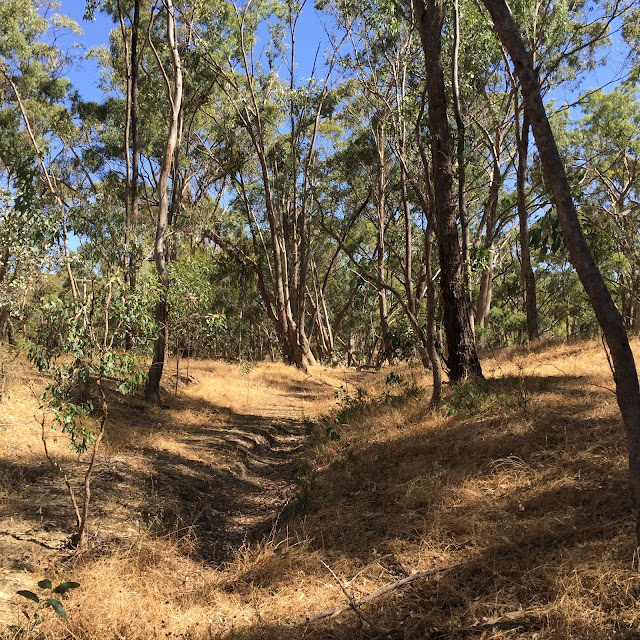 I took advantage of the visit to collect additional leaves and to search for Amorbus alternatus nymphs, the enchanting insects that populate the eucalyptus saplings in Newstead. Although they are regarded as minor pests, it is they that refine and shape the leaves I use in my images. 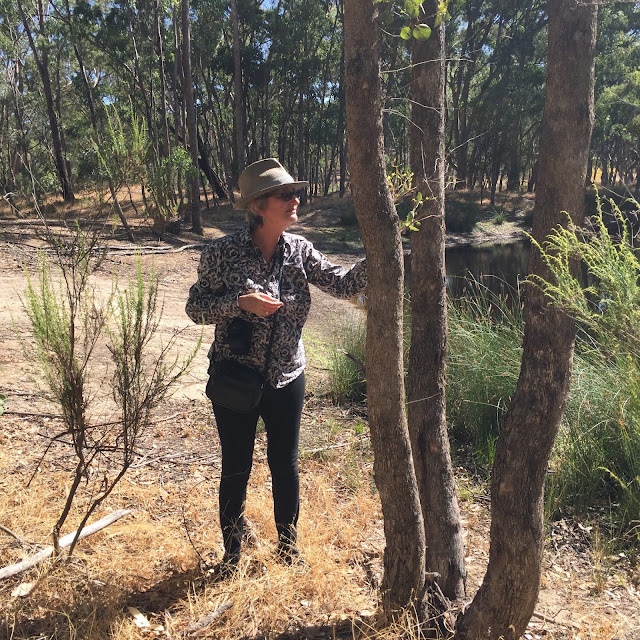 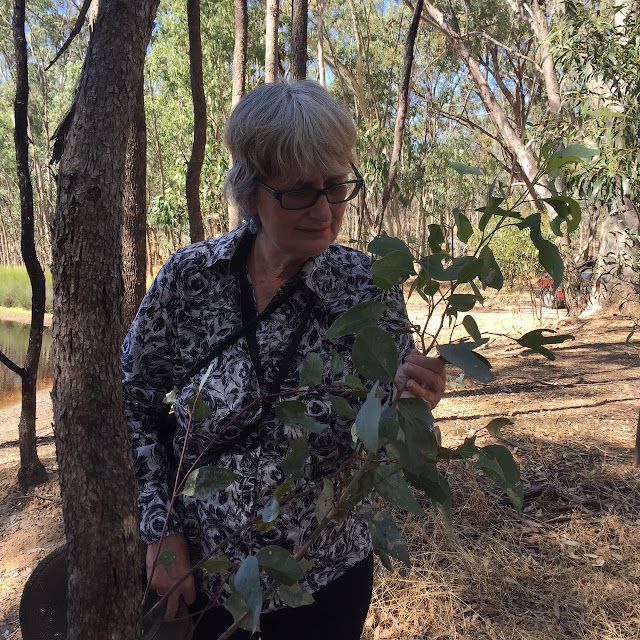 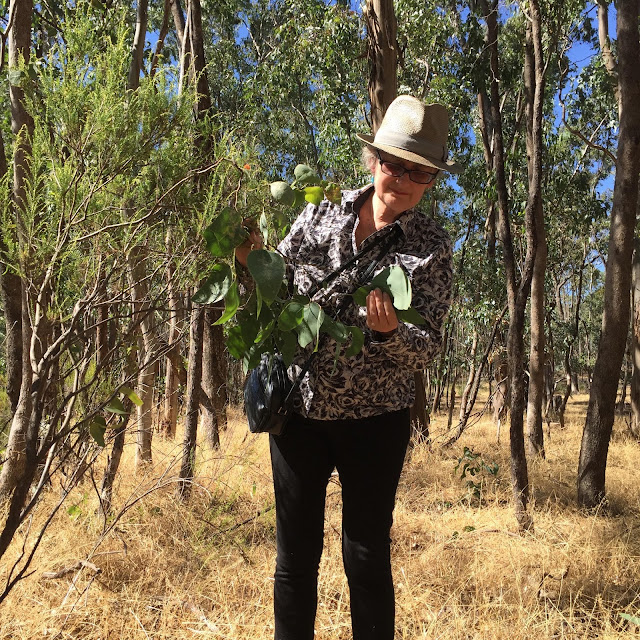 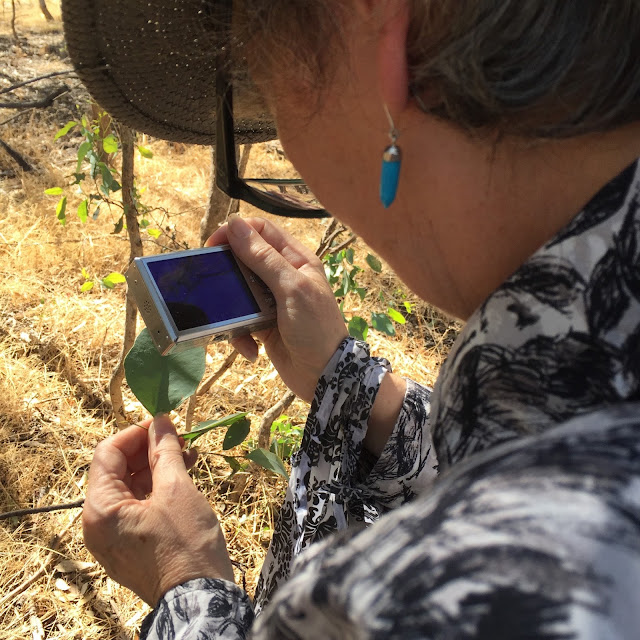 There were not as many Eucalyptus tip bugs as on previous visits. I've since discovered that they are most prevalent on hot days (Sunday was bearably warm, compared to the scorcher of a day we first came upon them just over twelve months ago). Most of the nymphs we found were quite small, but exquisite nonetheless. 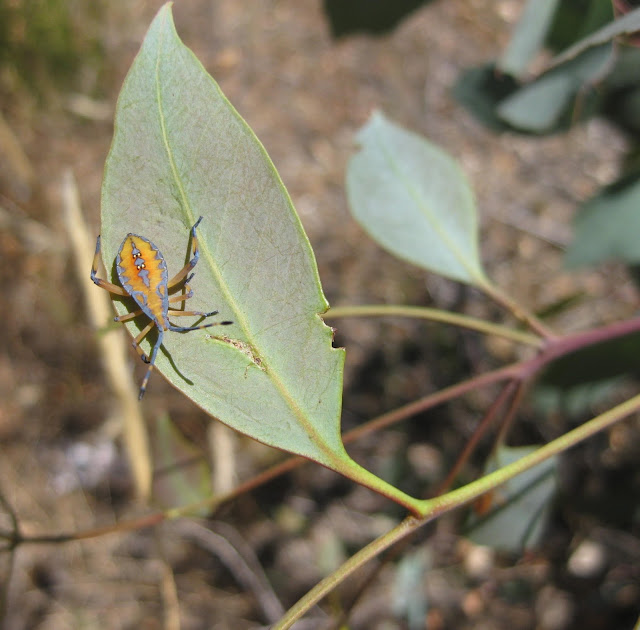 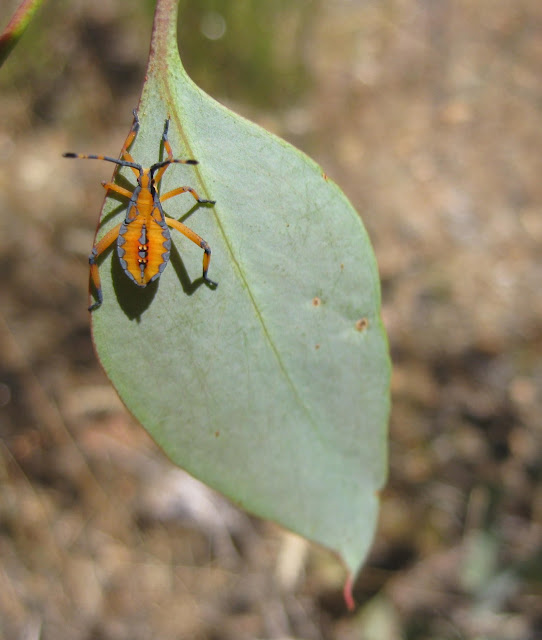 I also uncovered a colourful egg of an unknown creature: 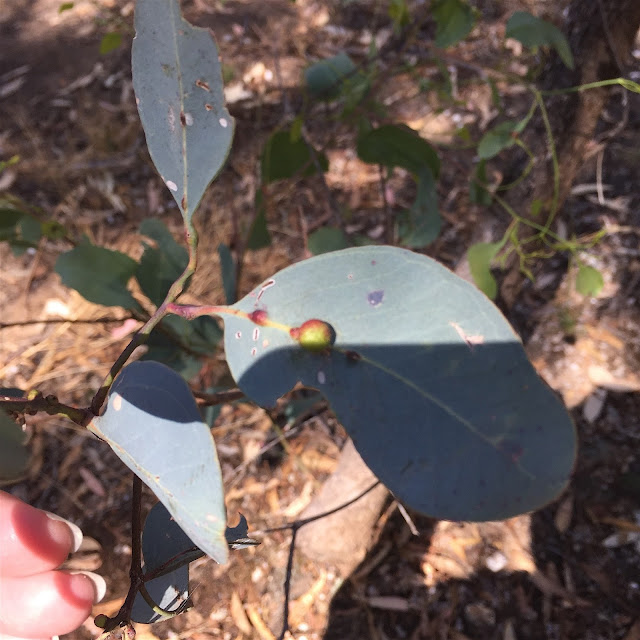 I'm guessing it contains an insect just like the one in the following two images: 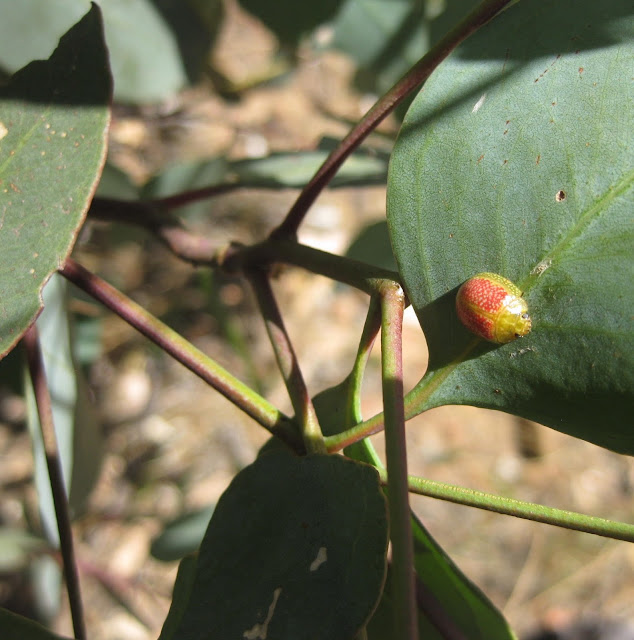 Research as to its identity will most certainly follow. 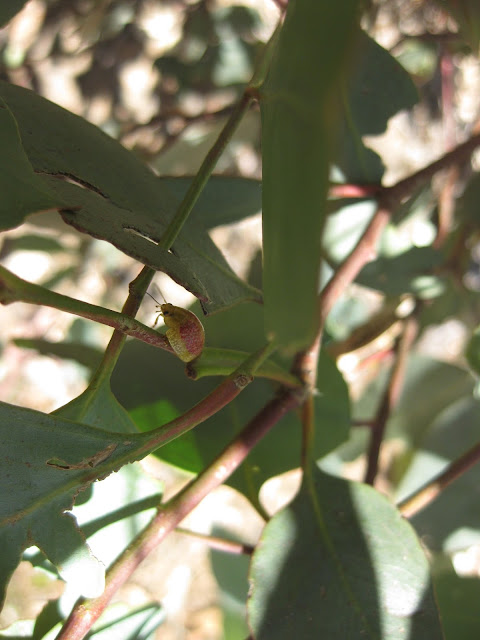 In the underbrush a butterfly (a Wanderer, I believe) rested. 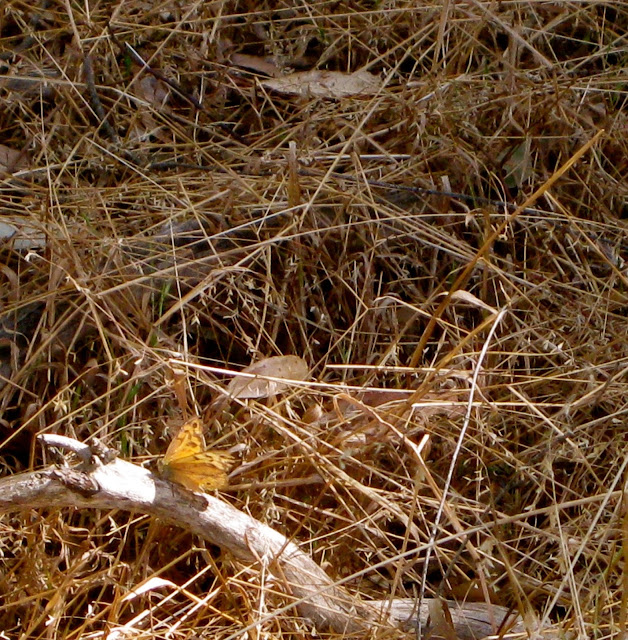 I also discovered this splendid caterpillar. Again, I've no idea of its identity, although its colours recall those of the Amorbus alternus nymphs. 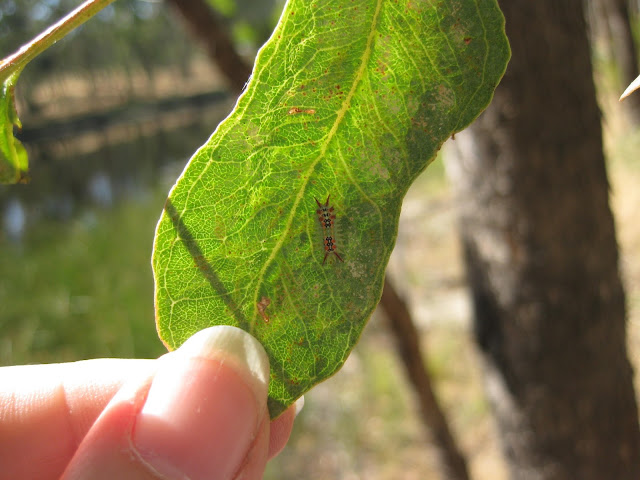 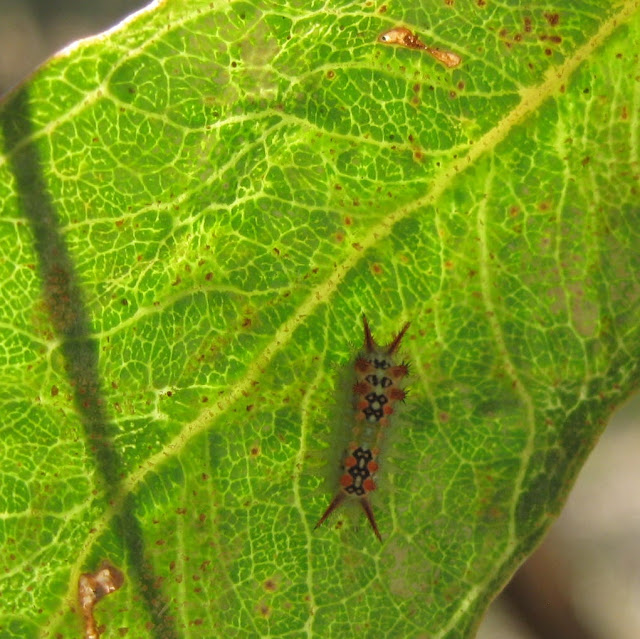 Directly below, it may look as if I'm photographing an empty leaf, but in fact my camera is focused on a tiny spider, camouflaged so successfully as to render it virtually invisible on the leaf's surface. Only the spider's shadow betrays its presence.

(The carrier bag hanging from my wrist contains my latest haul of leaf specimens, now pressed and drying in the Ballarat studio). 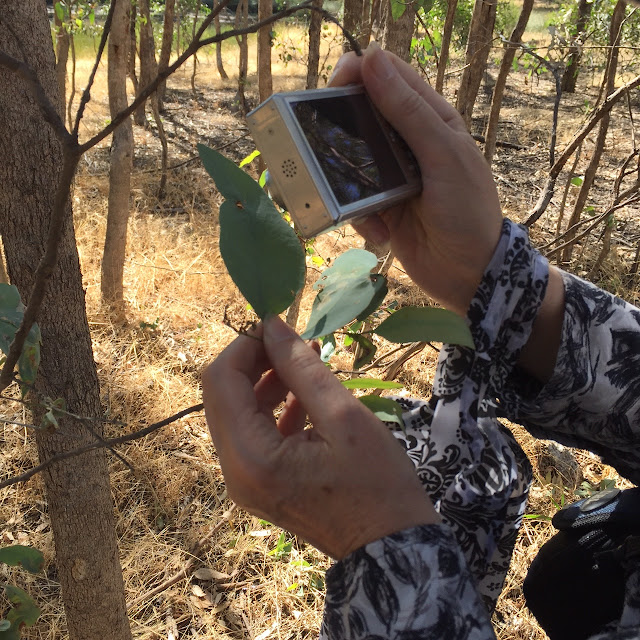 Subsequent research has revealed it to be a Flower Spider. 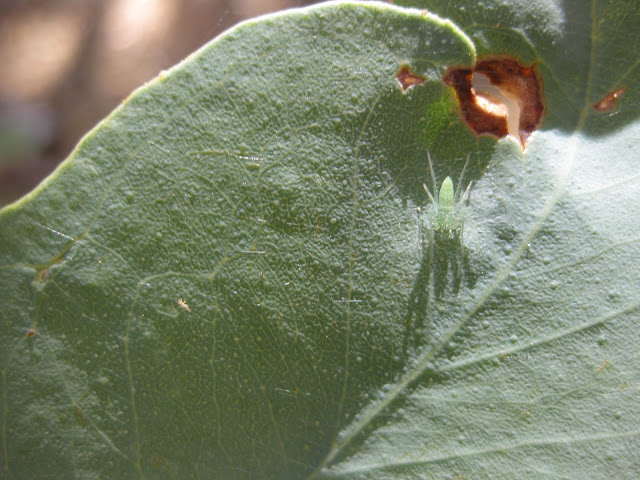 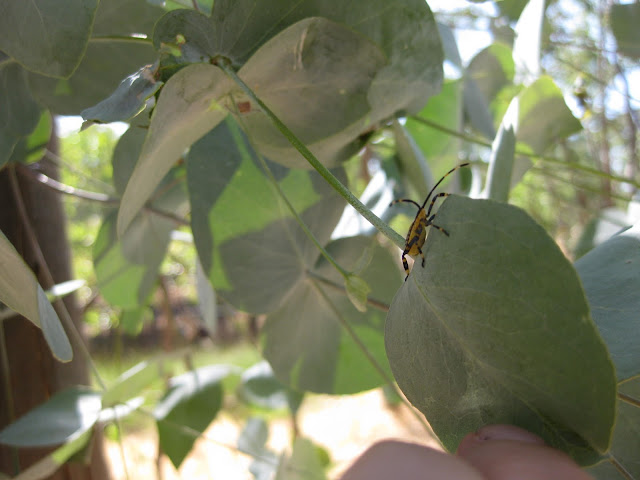 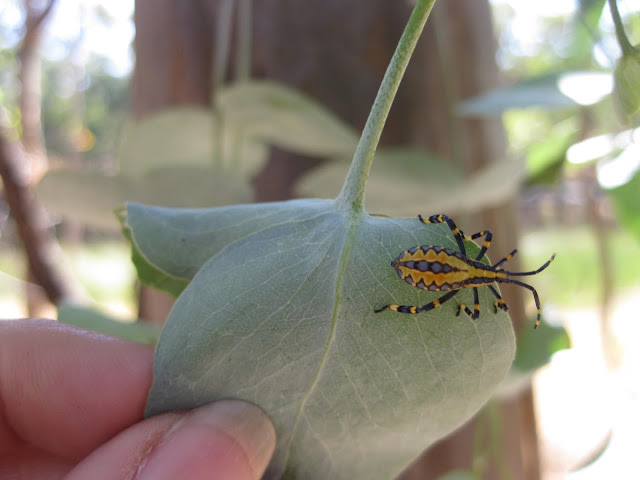 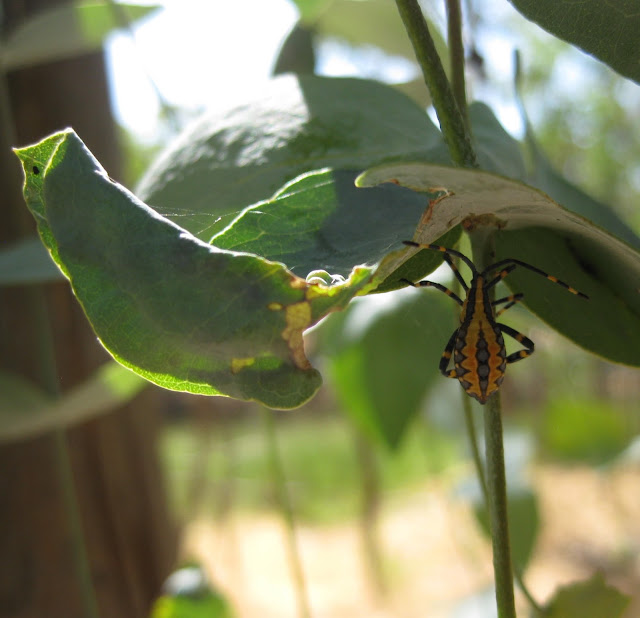 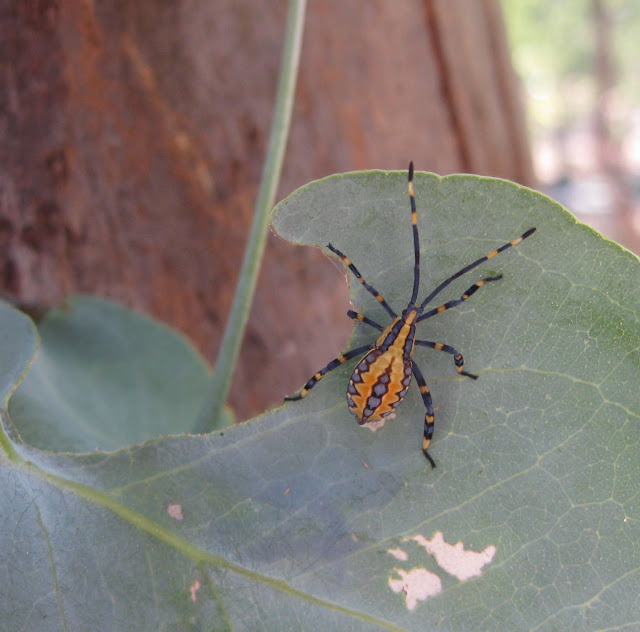 What better way to end our fruitful visit to Newstead on a warm day than with a cold beer? 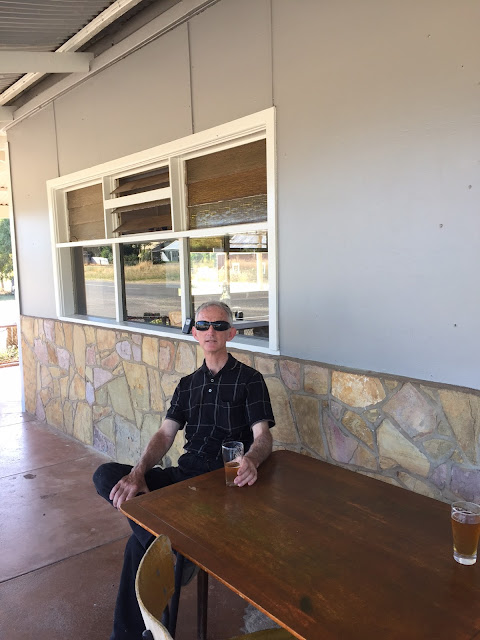 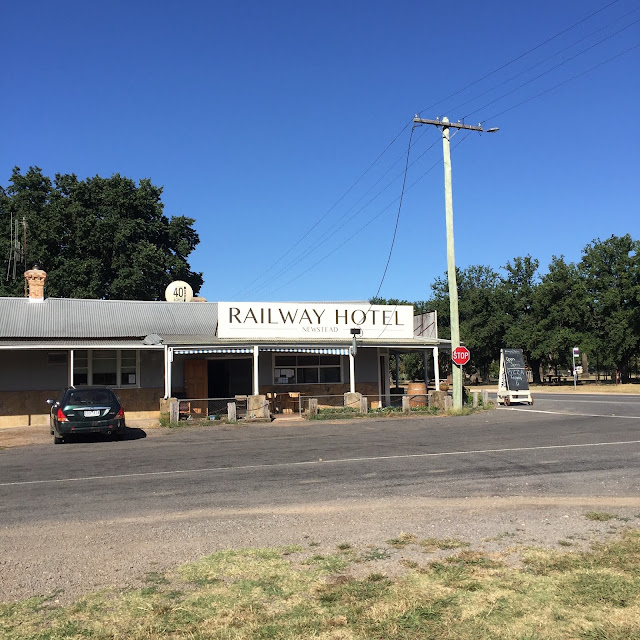 Thank you, Newstead and goodbye - until next time.

For more about our visit to Newstead, visit Moth Woman Press HERE.
Posted by Deborah Klein at 8:43 AM