My head is still reeling from last weekend’s Mildura BMW Australian Print Triennial. After the dizzying whirlwind of talks, demonstrations, workshops and Q and A sessions, it will take considerable time to descend to Planet Earth, let alone process it all.

As one session after another unfolded, I couldn’t help but reflect on how many individuals present at the APT have touched my life in significant ways. I spent most of the first evening (spent at Stefano’s Theatre Club upstairs at the Brewery) talking to Raymond Arnold throughout what would be the first of several memorable meals. Ray taught me for first semester in first year printmaking at Chisholm Institute in 1982. Later that night I also spoke with Helen Maxwell, who showed the Pirate Jenny Prints at the legendary aGOG (Australian Girls' Own Gallery) in Canberra on the first leg of its tour in 1989. Sasha Grishin wrote an early review of my work and has since written about it at greater length. Rosalind Atkins once lent me her grandmother’s lace, which I used as the basis for several images in the Knots and Braids series in the 1990s. (Many years ago, Ros also gave me some invaluable advice about printing lino blocks; for this alone, I’m forever in her debt). Stuart Purves, Director of Australian Galleries, showed my work for a number of years. In 2002 Catherine Pilgrim instigated the touring exhibition Common Thread, that featured my partner Shane Jones's work, Catherine's and my own. Jazmina Cininas was the visionary behind the group exhibition The enchanted forest – new gothic storytellers (2008) that would change the direction of my work. Donata Carrazza launched my little fairytale book There was once… at the Art Vault in 2009. Through the years Rona Green has curated me into several of her celebrated portfolios/exhibitions. Anne Virgo, Director of the Australian Print Workshop, told me about the original works by Maria Sibylla Merian in the British Museum prior to my last London visit in 2014. And I’m certainly not forgetting the boundless kindness and generosity of Art Vault Director Julie Chambers, who presented me with the greatest compliment I received all weekend when she described me as ‘family’. Then there were Heather Shimmen, Martin King, Loris Button and Robyn Archer (whose work I’ve long admired, but until this weekend had never met). The list goes on…

In between sessions, we were wined, dined and treated to wonderful music, including some impromptu turns by Robyn Archer. During one of these, I was thinking it was worth coming for this alone, when a mind reader next to me voiced exactly the same sentiment – I think it's safe to say we were not alone in this!

Along with several other presenters and visitors, I stayed at the Commodore Motel in Deakin Avenue, minutes away from the Art Vault and several other Triennial venues. My immediate next door neighbours were Rona Green and Thomas Middlemost. The three of us hung out together quite a lot, which was enormous fun.

The first official events Rona and I attended were a series of three consecutive exhibition openings on October 30. The first of these, 15 Young Emerging Australian Artists at Stefano’s Café, 27 Deakin, was opened by Cathy Leahy, Senior Curator of Prints and Drawings at the National Gallery of Victoria. (I really enjoyed talking to Cathy on the weekend too).

Half an hour later, two exhibitions opened at ADFA, a couple of doors down at 31 Deakin Avenue: United Nations Human Rights Folio and International Humanist Art Exhibition, both of which were curated by William Kelly.

Outside the Art Vault, shortly after Raymond Arnold and Graham Peebles had been announced joint winners of the Print Prize, fashionistas Rona Green (who recently suffered a stress fracture) and a similarly injured Anne Spudvilas compared their matching ‘Ugg’ boots.

On the morning of October 31, Robyn Archer ended her brilliant opening address with a song with lyrics by Bertolt Brecht. (The act of writing about it has just made the hairs on my arms stand to attention all over again).

On the afternoon of the same day Heather Shimmen and Mandy Gunn were part of a panel that examined the art of collaboration in print. (Like me, Heather is a nervous speaker, but she was terrific, as was Mandy). 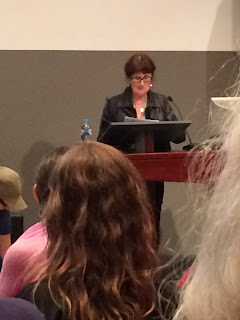 Immediately afterwards, at 3.30 pm, I took part in a Q and A panel chaired by Sasha Grishin, The Art of Politics Through Print. Needless to say, I was extremely apprehensive. But Sasha, my fellow panelists Geoffrey Riccardo and Mini Graff and the warm, receptive audience soon put me at ease – at least for me – and I received some generous feedback from several individuals afterwards.

We ended the day at Ampelon Gardens, across the river in Gol Gol, New South Wales. The privately owned Ampelon is one of the most exquisite gardens I’ve ever visited. The manner in which some of it is divided into 'rooms' put me a little in mind of Vita Sackville-West's garden at Sissinghurst. 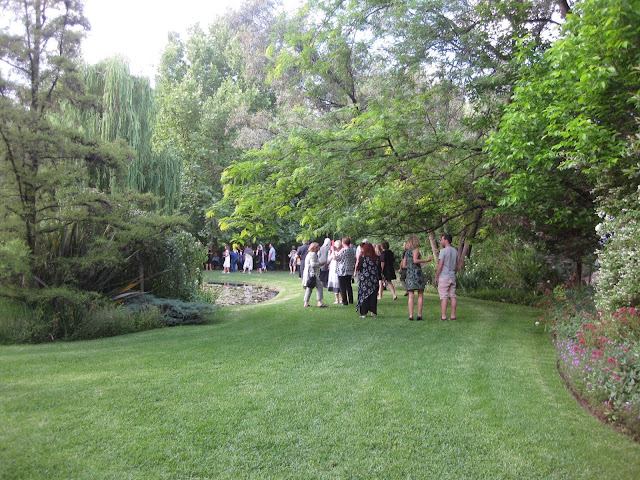 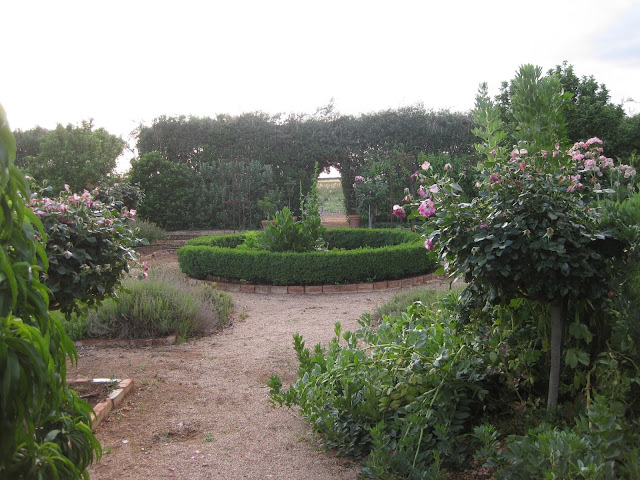 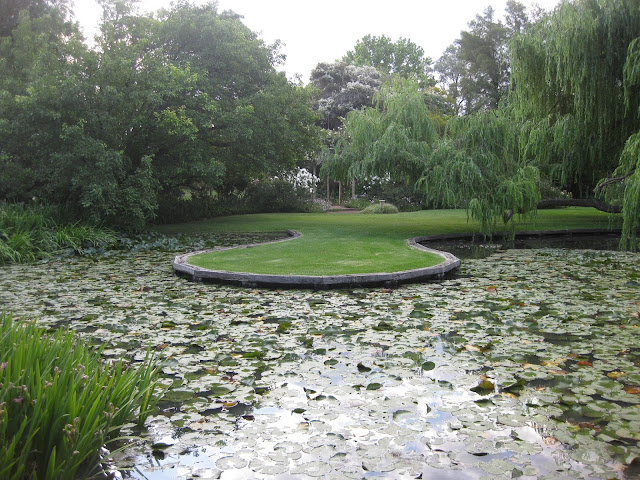 It was lovely to catch up with my old friend Heather Shimmen. 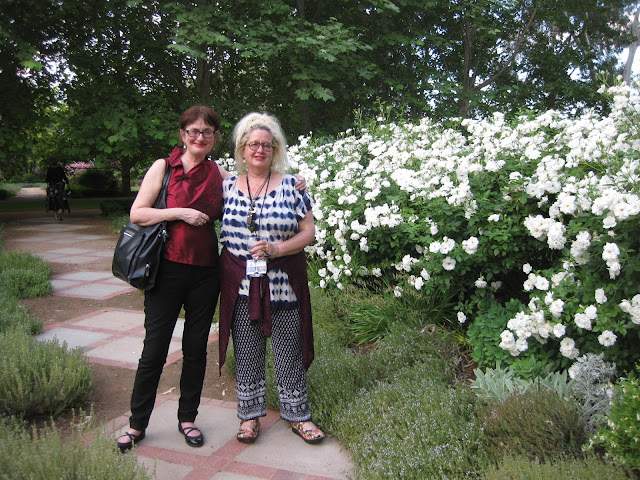 Dinner was a sumptuous three course affair under an elegant marquee.

In one of those impromptu sessions I mentioned earlier, Robyn Archer joined Nicky Crayson and the band for a rousing rendition of St. Louis Woman.

Directly below are Silvi Glattauer, Jazmina Cininas and Martin King. (This is one of my favourite shots – Martin threw back his head and burst into laughter just as I pressed the shutter).


There were two panel discussions on the following morning, November 1, one of which featured Rona. Along with Ron Mc Burnie and Jo Lankester, she discussed the vexed subject of sustaining a practice as an artist. It was a great session, offering much food for thought.

Following the second and final Q and A panel, Art and Social Justice Through Print with Judy Watson, Reg Mombassa and Arone Meeks (who I very much enjoyed talking to afterwards) we set off for Julie and Kevin’s house at Gol Gol.

During a long lunch with musical accompaniment from the likes of Dog Trumpet (Chris O’Doherty - AKA Reg Mombassa - and Peter O’Doherty) Robyn Archer, Jazmina Cininas and Martin King, I finally plucked up the courage to speak to Robyn, whose work I’ve admired since the late 1970s. I was concerned that I might come across like Anne Baxter’s sociopath Eve in the movie All About Eve, so had hung back. But in the end I decided I’d never forgive myself if I didn’t say something, however brief. Robyn Archer’s work has meant a great deal to me, particularly A Star is Torn and Pack of Women, which I’m certain have left their mark on my own work. Robyn mentioned she’ll be performing for one night only early next year at Hares and Hyenas book shop, which, coincidentally, is fairly near our place in Melbourne. I’ll definitely be looking into that. (She said she enjoyed my presentation too; I’ll try not to let that go to my head).

The Goldfields Printmakers are spread far and wide; there are several I haven’t met yet. Towards the end of the festivities I discovered there were actually eight of us at the Triennial. There was just enough time for a quick photo shoot before the party broke up and some of us left for home. Pictured below, L-R: Goldfields Printmakers Loris Button, Penny Peckham, Catherine Pilgrim, Kir Larwill, Dianne Longley, Deborah Klein, Melissa Proposch and Diana Orinda-Burns. (Thank you, Silvi Glattauer for this shot and the photo of Heather Shimmen and I).


I was sorry to leave Mildura, but Rona Green was a delightful travel companion on the short flight back to Melbourne. 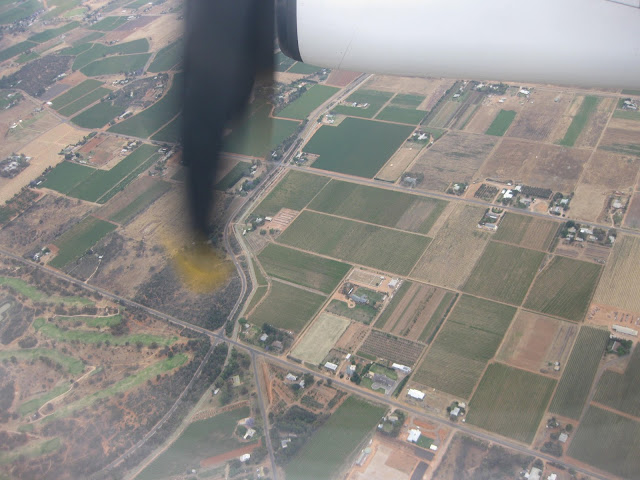 Thanks to Art Vault Director Julie Chambers, Kevin, the Art Vault team, Sasha Grishin, Helen Healey, Robyn Archer and everyone else who put so much into this amazing event, it really was a Print Triennial to remember. Roll on 2018.
Posted by Deborah Klein at 11:17 AM