Before my recent Berlin sojourn (in November 2011) becomes naught but a distant memory - at least until the next visit - here is the first of a short series of selected highlights. I’m starting with this fabulous museum, as it has helped rekindle my interest in silent cinema, which in turn appears to be infiltrating some of my current work. 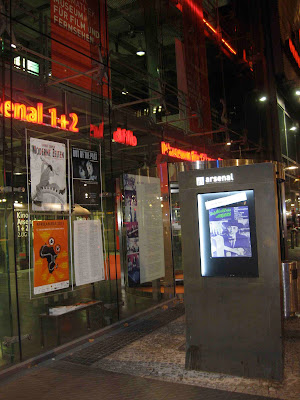 Part of the Filmhaus, which also includes a film school and the Cinematheque-like Arsenal cinemas, Filmmuseum Berlin provides an immersive, hugely entertaining and exceptionally instructive journey through the history of German Cinema.  I felt very much like Lewis Carroll’s Alice, particularly when walking the Caligari-like path that snakes through its dizzying mirrored multi-screened entrance hall - although for film buffs, Wonderland and Looking Glass World combined have nothing on this place. 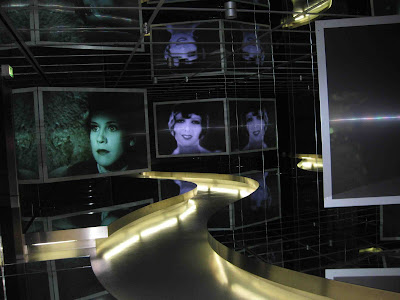 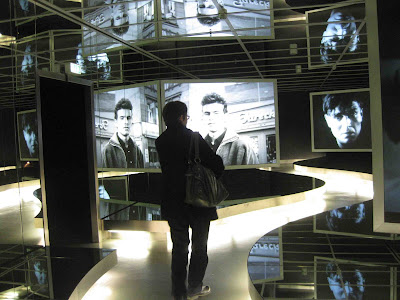 From Berlin-born Marlene Dietrich’s estate the museum has inherited a vast holding that includes photographs, letters, items of personal clothing and, most notably, costumes from her films. These are regularly rotated. The installation view immediately following includes photographs of Dietrich and her mentor Josef von Sternberg, along with the top hat and other accessories and artifacts from her first Hollywood film Morocco (1930, dir. Josef von Sternberg). Pictured second below is the costume Dietrich wore as dance hall girl Frenchie in the comedy western Destry Rides Again (1939, dir. George Marshall). Cast completely against type, her droll, earthy performance (opposite James Stewart) is considered to be responsible for bailing out her sinking film career. 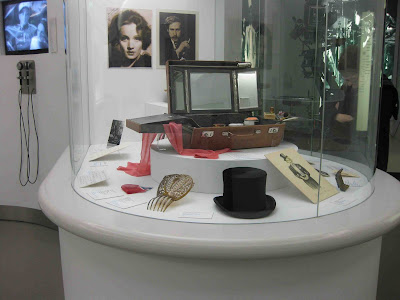 The exhibits that focused on German silent film and early talkies were especially captivating. These included posters, costumes, stills, film clips, and superbly crafted scale models of film sets, including (first and second directly below) The Cabinet of Doctor Caligari (1919, dir. Robert Wiene) and The Blue Angel (1930, dir. Josef von Sternberg). Among the costumes was a touchingly evocative facsimile of the doorman’s coat worn by Emil Jannings in the silent classic The Last Laugh (1924, dir. F. W. Murnau). But best of all were a series of film clips of silent movie actress Asta Nielsen, whose acting range (unlike that of the far better known Dietrich) appeared to be limitless.  I knew little of her work, and have the Filmmuseum Berlin to thank for introducing me to it. 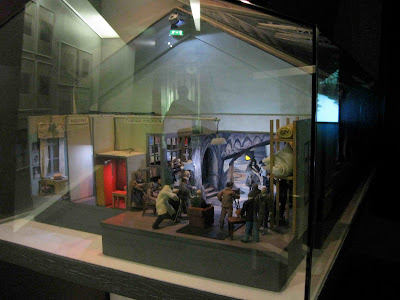 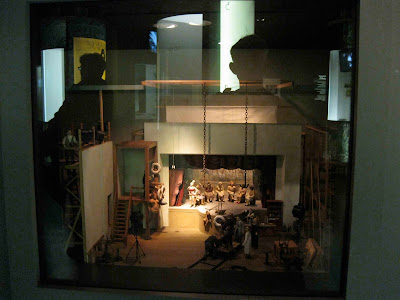 Our lengthy visit to this extraordinary place ended in the bar on the ground floor, named for legendary director Billy Wilder, whose own dazzling career began in Berlin. We drank a toast to him. 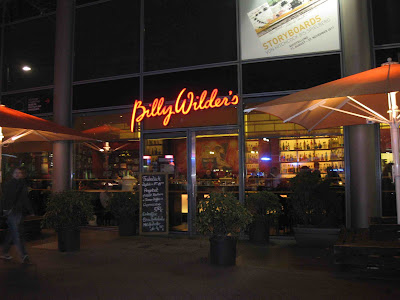 Posted by Deborah Klein at 8:37 AM